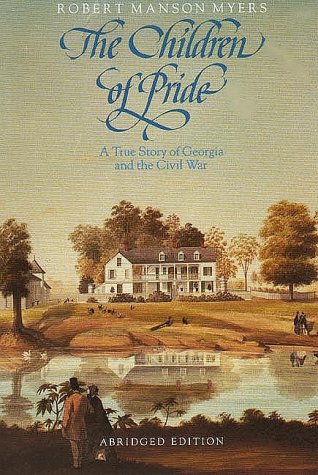 The Children of pride : selected letters of the family of the Rev. Dr. Charles Colcock Jones from the years 1860-1868, with the addition of several previously unpublished letters

The remarkable Civil War letters of a Georgia plantation family, now available in a compact, illustrated volume for new readers and for all those who so greatly admired the original monumental edition. The letters vividly recreate a period of American history unparalleled for its drama and poignancy. From reviews of the first edition: No story in America's history has been so often told, or has so well stood the retelling, as that of the Old South and its destruction. But Robert Manson Myers's splendid book] tells it as it has not been told before, in the fullness of its poignancy and tragedy. -Madison Jones, New York Times Book Review A great and indispensable book. -Jonathan Yardley, New Republic A Gone with the Wind saga...This book is superb. -Clarence E. Olson, St. Louis Post Dispatch The Children of Pride is family reconstruction on a grand scale. It demonstrates how the editing of sources can become, in the hands of an imaginative scholar, the work of creative history. -Citation for the 1973 National Book Award in History. The original version of The Children of Pride was the winner of the 1973 National Book Award in History.It was also named among the best books of 1972 by the American Library Association and by the New York Times Book Review, Saturday Review, Time, Washington Post, and Newsweek.… (more)

LibraryThing member rbcdelaware
I first encountered this book in the early 1980s and have found it fascinating. It is one of those books I keep going back to every year or so - not to read the whole thing, which is nearly 2,000 pages in length, but to read selected letters here and there. It is the letters of a prominent and very articulate extended Georgia family from the 1850s through the late 1860s, encompassing the entire Civil War era. The thing reads like an epistlatory novel but infinitely richer. Highly recommended. There is a shorter version (1984) which I also have.… (more)

Fateful lightning : a new history of the Civil War and Reconstruction by Allen C. Guelzo
Lee's lieutenants, a study in command: Manassas to Malvern Hill by Douglas Southall Freeman
The Destructive War: William Tecumseh Sherman, Stonewall Jackson, & the Americans by Charles Royster
Patriotic gore : studies in the literature of the American Civil War by Edmund Wilson
Where the buck stops : the personal and private writings of Harry S. Truman by Margaret Truman
1 more
The great triumvirate : Webster, Clay, and Calhoun by Merrill D. Peterson
Fewer