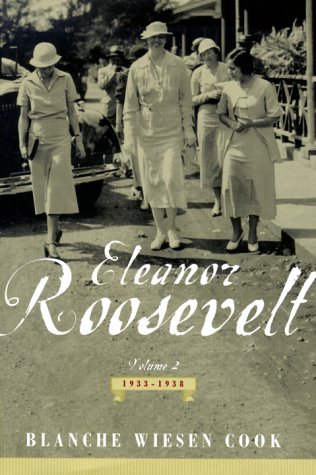 This second volume encompasses the Great Depression, the New Deal, and the gathering storms of World War II - the years of the Roosevelt's greatest challenges and accomplishments. This biography restores Eleanor Roosevelt to her place as a visionary policymaker and social activist with her own agenda, often ahead of her more circumspect husband. From the day she entered the White House - and began holding press conferences for female journalists only - Eleanor Roosevelt worked indefatigably for justice and equality. She wrote, she published, she travelled, she lobbied, she joined grass roots organizations and radical communities with a zeal that sparked controversy everywhere. Cook gives us the complete Eleanor Roosevelt - a loyal wife, a devoted mother, a woman who courted romance and adventure, America's most compelling, charismatic, and visionary First Lady. She took unpopular stands and often countered her husband's policies, particularly concerning racial justice, women's rights, the plight of refugees, and approaches to fascism and the Spanish Civil War. And in November 1938, after Kristallnacht, as Europe drifted towards war, she took an unprecedented and courageous stance on race relations and bigotry. Intimate, sympathetic and acute, this is an unparalleled portrait of a woman whose life was filled with passionate commitment and who struggled for personal fulfilment. It is a biography of vibrant scholarship and daring, a book for all readers of American history and politics.… (more)

LibraryThing member patience_crabstick
Certainly a book worth reading, but I preferred volume one of Cook's biography of Eleanor Roosevelt, which had more personal information. This volume was often like reading excerpts from someone's day planner. I did like some of the insights into ER's character, though, such as Cook's theory that ER's insistence on keeping as the White House head housekeeper, a woman who seemed to deliberately prepare food that FDR hated was her revenge for FDR's infidelity.… (more)
4 more
LibraryThing member missporkchop
This is the second volume of Cook's biography; volume one covered the years 1884-1933. I found both volumes very informative and highly researched. The author had access to a great deal of Mrs. Roosevelt's correspondence and made much use of it, often quoting from letters and speeches to support her conclusions. Mrs. R was definitely her own person and never shirked from what she saw as her duty to others, even when that meant disagreeing publicly with FDR. She also had a complicated private life, and the author devotes equal time and researach to both private and public lives. Overall, an enjoyable book, and I'm hoping that volume three is in the works.… (more)
LibraryThing member mahallett
i thought i wouldn't like this as much as volume 1 but it was great. eleanor has such energy and the ability to ignore the unpleasantness of others. a type of saint but very human. i wish bwc had written the third volume.
LibraryThing member uufnn
According to the Boston Globe, this work covers the "...era of the Great Depression, the New Deal and the gathering storms of World War II--the years of Roosevelt's greatest challenges and achievements. Cook provides the complete Eleanor Roosevelt--a visionary policy-maker and social activist, a loyal wife, a devoted mother, and a woman who courted romance and adventure. She wrote, she published, she traveled, she lobbied, she joined grass-roots organizations and radical communities with a zeal that sparked controversy everywhere." This is an unparalleled portrait of the woman.… (more)
LibraryThing member gbelik
This second volume of the the biography deepens my appreciation of Eleanor (and slightly reduces my admiration for FDR). Eleanor stakes out her own intellectual and social and political territory in these years. While she remains loyal to her husbands goals and tactics (to a certain extent), she speaks and acts independently on causes that are important to her. I was interested to see how much her independence was accepted by the media and people at this time; it seems to me that a First Lady is not allowed as much of her own political agenda in the 21st century as Eleanor took 80 years ago.… (more)
Fewer

Eleanor roosevelt : the war years and after, 1939 -1963 by Blanche Wiesen Cook
Traitor to His Class : The Privileged Life and Radical Presidency of Franklin Delano Roosevelt by H. W. Brands
This I Remember by Eleanor Roosevelt
Grandmère : A Personal History of Eleanor Roosevelt by David B. Roosevelt
Franklin and Eleanor : an extraordinary marriage by Hazel Rowley
8 more
Franklin and Lucy : President Roosevelt, Mrs. Rutherfurd, and the other remarkable women in his life by Joseph E. Persico
Personal History by Katharine Graham
Dearest Friend: A Life of Abigail Adams by Lynne Withey
Eleanor and Hick : the love affair that shaped a First Lady by Susan Quinn
The bully pulpit : Theodore Roosevelt, William Howard Taft, and the golden age of journalism by Doris Kearns Goodwin
Bess W. Truman by Margaret Truman
Madam Secretary by Madeleine Korbel Albright
Truman by David G. McCullough
Fewer