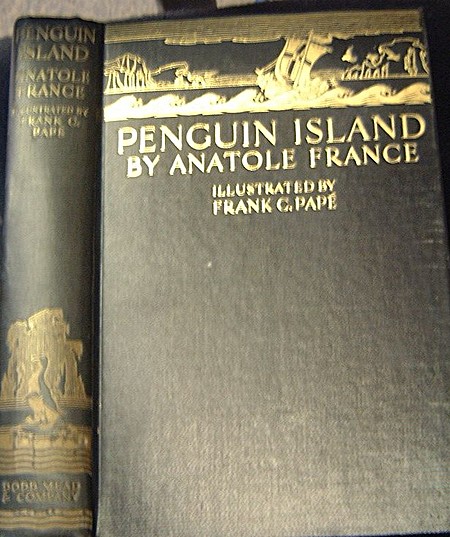 When a bumbling holy man mistakenly baptizes a colony of penguins, God endows the animals with souls and their formerly peaceful community declines into a maelstrom of violence and sin. This witty allegory lampoons French history from ancient to modern times, taking satirical swipes at socialists, royalists, industrialists, militarists, and even the Dreyfus affair, and concluding with a remarkably prescient view of the future. Indeed, more than a hundred years after its initial publication, the story's insights into politics and society remain enduringly relevant. Poet, novelist, and journalist Anatole France (1844-1924) received the Nobel Prize in 1921 in recognition of his literary achievements. His writings reflect an ironic and skeptical point of view, and many of his works were placed on the Roman Catholic Church's Index of Forbidden Books. This edition of Penguin Island is enhanced with the original black-and-white images by noted illustrator Frank C. Papé.… (more)

LibraryThing member Kryseis
A venerable priest, after being led astray by the devil to be wrecked on an island of penguins, mistakes the penguins for a (rather short) race of men, converts them and baptizes them.

Then, the Lord and many saints, including Saint Augustine and Saint Catherine, are faced with a problem. Are the penguins actually baptized? After some hilarious arguments, it is decided that form is more important than essence. Ie. that because God will only recognize baptisms, weddings, etc. of a certain form (speaking certain words in a certain sequence, in Latin - a kind of formula), He must recognize all such things that cohere to the form, despite whether or not they are right in essence. Hence, because the baptism, however wrong in essence, was performed in correct form, it is valid. To prevent further problems, the penguins are transformed into people.

The book is a mock-history of the people of Penguin Island. It satirizes many historical events, notably the Dreyfus affair. It's full of twisted logic (like the logic in the argument about whether or not the penguins were actually baptized) and, for each time period that it covers, imitates the writing style and the feel of the stories of those periods. For example, in the first couple of books, the devil makes frequent appearances while taking on the form of some other person.

Altogether, it's a funny enough read in and of itself (even if you're not familiar with the events that it's satirizing), but it's much better if you're in on the grand joke.… (more)
10 more
LibraryThing member jlelliott
When a bumbling priest accidently baptizes a population of penguins, God is left with a cosmic problem. The solution results in the creation of the Penguin race, and is the beginning of the long history of Penguinia.

Anatole France has essentially written an entire farcical history book, satirizing various stages of human civilization. First he mocks early religion and mythology, prominently featuring the exploits of a saucy and quick-witted young woman, who in later Penguin history will be known as Saint Orberosia, despite her history of infidelity and opportunistic lies. He follows this up with lampoons of the middle age and modern times, both of which center on the relationship between government and religion. The church, composed of saintly followers of the holy Orberosia, is a constant threat to the representative government, alternately instigating baseless scandals (a la the Dreyfus affair), plotting revolutions, and conspiring to start unprovoked wars. Finally France provides us with a very dystopian vision of the future, where Penguinia becomes a soulless commercial metropolis under attack by disillusioned terrorists.

The premise of this book is clearly inspired, but I found it hard to read. It really is a history book, which means that it skips quickly from story to story, never staying long with any particular set of characters. I found the stories involving love and relationships to be sarcastically poignant, while some of the political insights display an astounding amount of relevance to modern events. For example, reflecting on the Penguin government - “The Penguin democracy did not itself govern, it obeyed a financial oligarchy which formed opinion by means of the newspapers, and held in its hand the representatives, the ministers, and the president. It controlled the finances of the republic, and directed the foreign affairs of the country as if it were possessed of sovereign power.” Hmm. When speaking of the political leader they hope to groom into the internal destroyer of the Penguin republic - “It is not necessary for the man we choose to be of brilliant intellect. I would even prefer him to be of no great ability. Stupid people show an inimitable grace in roguery.” I at least can’t help but be reminded of a certain modern political leader.

Although I didn't enjoy reading the book as much as I'd hoped, all of the witty phrases and lucid insights make Penguin Island worth the time it takes to slog through a whole imaginary history.… (more)
LibraryThing member TheCrow2
An episodic satire about the penguin who were baptized by a half-blind priest and therefore granted human soul and form. Based on mostly the french history sadly I didn't get most of the inner jokes but still a funny twisted work about the past and the future of human history....
LibraryThing member Stbalbach
I only read the first 177 of 324 pages - I'm not a huge fan of old satires when the historical context is unclear, I'm reading the words but not really understanding, it's an in-joke with me on the outside. The first half was a lot of fun because I knew European history enough to understand the allegories and allusions . The second half of the modern period is beyond me and tiresome. One day I may return to finish when I have more context.… (more)
LibraryThing member AliceAnna
I was very disappointed in this satire. The reviews I read made it sound hilarious. It wasn't. It was very dry and hard to get into. The Pyrot Affair was the best part as a condemnation of the justice system and a look at the mob mentality. I'm not sorry I read it, but I wouldn't go out of my way to read it again, or read anything else by France. I would give it 2-1/2 stars given the option.… (more)
LibraryThing member Deinonychus
This is a wonderfully witty and thought-provoking novel that presents the history of the state of Pingouinie as an allegorical story of (mostly French) history. Reading the original French is definitely recommended as France's command of language is second to none, and his nuanced text proves a delight to read. While I know enough French history to pick up on many of the allusions, I am sure there are many more that would meet a more discerning eye, but there is much that is also a commentary on society in general. The book ends with a poignantly apocalyptic vision of the future that is, in many ways, the most beautiful and heart-rending part of the book, and rings even more true now, 103 years after it was written.… (more)
LibraryThing member ari.joki
There is a risk with topical writing. The section "Modern times" builds on events that were current or recent at the time of writing, and today we remember only a vague reflection of a shadow of them -- and some perhaps were not terribly notable outside France anyway.

In general, Anatole France is portraying the follies, aggrandishments, vanities, and futilities of humanity through the ages with surprisingly small amount of caricature and satirising; the effect, however, is pretty strong still.

The work is episodic in nature, so it fits well with the modern short attention span; it can be faced in small spurts.… (more)
LibraryThing member rscotts
A beautifully written allegorical tale of the history of France intertwined with insight and wisdom.
LibraryThing member BillMcGann
If you like your satire served with brilliant wit with a touch of irony and a side of righteous anger, then Anatole France (the pen name of Jacques Anatole François Thibault) is your writer. You can credit Anatole France, winner of the 1921 Nobel Prize in Literature, with the famous maxim: “The law, in its majestic equality, forbids the rich as well as the poor to sleep under bridges, to beg in the streets, and to steal bread.”

Penguin Island starts with a fantastic premise. A missionary, half blind, comes across the island of penguins and baptizes them. Up in heaven, confounded with this act, the Lord gives the birds souls and intellect. France then uses his new civilization to satirize almost anything within range of his scathing intellect. The book generally parallels the development of human civilization. The longest chapter, the story of Pyrot and the 80,000 Trusses of Hay is a blistering critique of the French government’s frame-up of Alfred Dreyfus. This chapter alone justifies the price of the book.

For those who have come to this review through my Tour de France history or my cycling commentary, it should be noted that the Dreyfus Affair was the proximate cause of the creation of Tour de France.

Anatole France is a genius. I heartily recommend this book.… (more)
LibraryThing member rscotts
A beautifully written allegorical tale of the history of France intertwined with insight and wisdom.
LibraryThing member benjclark
I was fortunate enough to find a copy of Penguin Island in the buckram Modern Library edition and read it. The description suckered me in. I didn't like it much at all. There was a decent story line toward the end, but it didn't do much for me overall.
Fewer

The gods are a-thirst by Anatole France
Man's Fate (La Condition Humaine) by André Malraux
The Adventures of Hajji Baba of Ispahan by James Morier
The First Temptation of Saint Anthony by Gustave Flaubert
The life of Samuel Johnson. Three Volumes by James Boswell