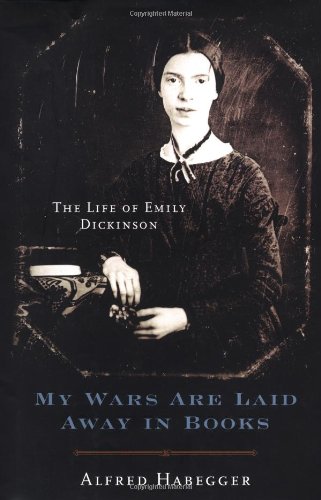 My wars are laid away in books : the life of Emily Dickinson

Emily Dickinson, probably the most loved and certainly the greatest of American poets, continues to be seen as the most elusive. One reason she has become a timeless icon of mystery for many readers is that her developmental phases have not been clarified. In this exhaustively researched biography, Alfred Habegger presents the first thorough account of Dickinson's growth-a richly contextualized story of genius in the process of formation and then in the act of overwhelming production. Building on the work of former and contemporary scholars, My Wars Are Laid Away in Books brings to light a wide range of new material from legal archives, congregational records, contemporary women's writing, and previously unpublished fragments of Dickinson's own letters. Habegger discovers the best available answers to the pressing questions about the poet: Was she lesbian? Who was the person she evidently loved? Why did she refuse to publish and why was this refusal so integral an aspect of her work? Habegger also illuminates many of the essential connection sin Dickinson's story: between the decay of doctrinal Protestantism and the emergence of her riddling lyric vision; between her father's political isolation after the Whig Party's collapse and her private poetic vocation; between her frustrated quest for human intimacy and the tuning of her uniquely seductive voice. The definitive treatment of Dickinson's life and times, and of her poetic development, My Wars Are Laid Away in Books shows how she could be both a woman of her era and a timeless creator. Although many aspects of her life and work will always elude scrutiny, her living, changing profile at least comes into focus in this meticulous and magisterial biography.… (more)

LibraryThing member acommonreader
Good overall. Some ambiguity in the writing gives it 4 stars instead of 5 - Hard to follow all the different "Emily", "Dickinson",... folks.
3 more
LibraryThing member piemouth
I am not a poetry person, though I like some of Dickenson's poems. Her self aggrandizing suffering fits with mental stance for most of my life of bearing a secret sorrow (usually because of some romantic disappointment.) Her secret sorrows seem to be about a minister with whom she had a spiritual relationship & meeting of minds that made her call herself his wife. But much is shrouded in mystery, which makes her story so interesting.

Although I'd read another biography of her 30 years ago, I'd missed that so much of her writing had to do with spiritual things, and that she held out from professing her faith despite pressure from her school and family. She believed but was not sure.… (more)
LibraryThing member CasualFriday
Gee, what to say? I'm not qualified to assess this book in terms of its value to scholars, only in the pleasure it may afford to readers. It has been decades since I have read the Richard Sewall biography, but my memory of that work was that it was less dry and more fun to read than this one. It is a very careful book that seldom strays from verifable information and therefore does not present a grand thesis that might catch one's attention. That makes it more trustworthy but less readable than those biographies that essentially create their own Emily. I think it's well nigh impossible to write good biography of Dickinson - the information just isn't there. Habegger fills in the knowledge gaps with very detailed information about Dickinson's family members, but if you believe that geniuses are born, not made, information about family life, schooling and town politics are of limited value in getting to the heart of the subject.

For those who keep score, Habegger is a proponent of the Wadsworth-as-Master theory.… (more)
LibraryThing member AlanWPowers
This is the best Dickinson biography I've read, though Sewall's is very thorough, and the best from 1974-2001 or so. Habegger includes the newly discovered daguerreotype acquired by Gura, of Dickinson not age 16 (the universally familiar portrait, in Amherst College collection).
Besides the photos, his narrative is fine, even moving: Habegger's account of Dickinson's response to being chided by Helen Hunt Jackson for not publishing, and his account of Dickinson's funeral in the house. "Tell all the truth but tell it slant," like many of ED's later poems, was written on found paper--as was the Gettysburg address--; for instance, a graduation program from Massachusetts College of Agriculture, which her father also helped found.
The brilliant, courageous Col. Higginson, who led the first federally organized black regiment in the Civil War, perhaps found his courage failing in his famous encounter with the poet in 1870, "I never was with any one who drained my nerve power so much...I am glad not to live near her"(524).
He may have felt in almost a medieval joust, which despite his military training and bravery, he had not won. Perhaps gendre dynamics have always suffered from brilliant women--like Jane Austen, whose wit is ignored by her pious brothers' epitaph in Winchester Cathedral--though it is only fair to add, powerful women, as with men, need not be brilliant.
The poet confessed to her supporter and reviser, "I never knew how to tell time by the clock till I was 15. My father thought he had taught me but I did not understand & I was afraid to say I did not & afraid to ask anyone else lest he should know." Patriarchal power explain ED's, "I do not cross my Father's land to any House or town"(521) when inviting Higginson from Newport where he lived to Amherst. The Col sized up the men well, "Her father was not severe I should think but remote." (One might perhaps say the same of Austen's brothers.)
Father's investments fostered both Amherst colleges: one was the private, toll-charging Sunderland Bridge. (I think of a one-lane toll bridge I crossed in England, to an historic house and golf course; it was perhaps 30 mi from Wethersfield Air Base, as I recall, but my photos are on a decommissioned computer.)… (more)
Fewer