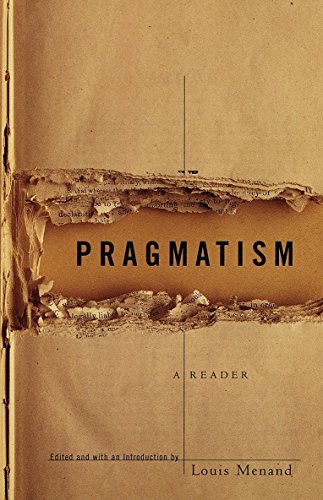 Pragmatism has been called America's only major contribution to philosophy. But since its birth was announced a century ago in 1898 by William James, pragmatism has played a vital role in almost every area of American intellectual and cultural life, inspiring judges, educators, politicians, poets, and social prophets. Now the major texts of American pragmatism, from William James and John Dewey to Richard Rorty and Cornel West, have been brought together and reprinted unabridged. From the first generation of pragmatists, including the Supreme Court Justice Oliver Wendell Holmes and the founder of semiotics, Charles Sanders Peirce, to the leading figures in the contemporary pragmatist revival, including the philosopher Hilary Putnam, the jurist Richard Posner, and the literary critic Richard Poirier, all the contributors to this volume are remarkable for the wit and vigor of their prose and the mind-clearing force of their ideas.… (more)

The Metaphysical Club: A Story of Ideas in America by Louis Menand
Modern Philosophy: An Introduction and Survey by Roger Scruton
William James : in the maelstrom of American modernism ; a biography by Robert D. Richardson