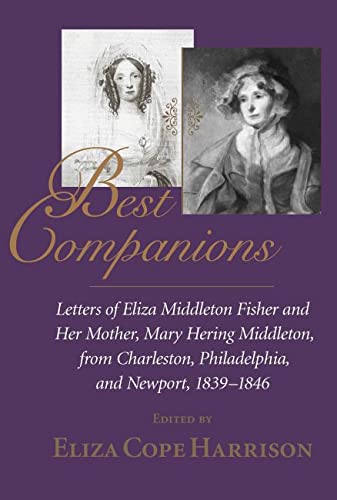 "In the spring of 1839, Eliza Middleton, the youngest daughter of a wealthy South Carolina rice planter and diplomat, married Philadelphian Joshua Francis Fischer at Middleton Place, one of the most celebrated plantations in the South. Soon after the wedding Eliza began a new life in Philadelphia, leaving her family and familiar surroundings behind. In her first letter home, she begged her mother, "Tell me everything when you write." Thus began a seven-year conversation - on paper - between Eliza and her British-born mother, Mary Hering Middleton, that would encompass some 375 letters. Gathered in this volume with more than fifty illustrations and an introduction by Eliza Cope Harrison, the correspondence offers a sweeping yet intimate view of antebellum Charleston, Philadelphia, and the fashionable resort of Newport, Rhode Island. The letters delineate a cultural and social life that bound together North and South at a time when sectional interests worked to sunder the nation." "Eliza and her mother chronicle issues and events ranging from mental illness to musical performances, financial panics to children's parties, pregnancy to politics. In addition they introduce one to another a notable cast of characters, including Charles Dickens, President Van Buren, the courtly Philadelphian George Harrison, the scandalous actress Fanny Kemble Butler, the irascible diplomat Henry Middleton, the lovely Julia Ward, and the African slave who was captain of the Middletons' private schooner."--BOOK JACKET.… (more)