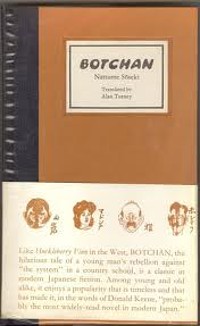 'All right, I decided, if I couldn't win tonight, I'd win tomorrow. If I couldn't win tomorrow, I'd win the day after. And if I couldn't win the day after, I'd just have my meals delivered from home and stay right where I was until I did win' Botchan is a modern young man from the Tokyo metropolis, sent to the ultra-traditional Matsuyama district as a Maths teacher after his the death of his parents. Cynical, rebellious and immature, Botchan finds himself facing several tests, from the pupils - prone to playing tricks on their new, naïve teacher; the staff - vain, immoral, and in danger of becoming a bad influence on Botchan; and from his own as-yet-unformed nature, as he finds his place in the world. One of the most popular novels in Japan where it is considered a classic of adolescence, Botchanis as funny, poignant and memorable as it was when first published, over 100 years ago. In J. Cohn's introduction to his colourful translation, he discusses Botchan's success, the book's clash between Western intellectualism and traditional Japanese values, and the importance of names and nicknames in the novel. Translated and introduced by J. Cohn… (more)

LibraryThing member kidzdoc
Botchan was written by Soseki in 1905, and it is widely considered to be one of the most important works of Japanese literature, as it was one of the first modern works that touches on the conflict between traditional values and beliefs found in remote Japanese villages, and the influence of the West and a modern society in a major city such as Tokyo.

The narrator is a young man of slight build but feisty spirit who has recently graduated from university with a degree in physics, who has been hired to teach mathematics in a middle school in a small rural town. Botchan is guided by his personal moral code and sense of duty, which is exceeded only by his self importance and pomposity. Almost immediately he runs afoul of several of the students in his classes, who torment him with blackboard comments and juvenile tricks. He subsequently angers his immediate supervisor, the principal of the school, and several of his fellow teachers, who conspire against him and his supervisor. Botchan strikes out against his accusers and foes, as he longs to return to Tokyo and to the old woman who served as the family maid during his troubled childhood, as she is the only person who nurtured and believed in him.

Despite its short length of 92 pages, Botchan was a tedious read that seemed at least twice as long as its actual length. Not recommended.… (more)
11 more
LibraryThing member Praj05
Botchan's story of his life as a middle-school teacher in the Japanese countryside is simple and entertaining.Botchan a complete stranger to compliments and praises in his childhood grows to be a loner with a 'I don't care' attitude.He gets confused or rather angry with the subtle manipulations he experiences later in life. The only emotional attachment he has and loves is that with his childhood maid Kiyo, who never stops from showering motherly love and praises on him.
The writings concentrates on the innocence and lack of insight experienced by a rookie when encountered with seasoned players(in this case teachers).Although the slow paced narration made me lose patience, it was quickly recovered with peals of laughter brought by the humorous incidents played in the school.The politics and manipulative aspects of the school were interesting and agreeable. It is a quick read. The best part about reading a classic is that it makes you understand the foundation of a culture and its attributes.… (more)
LibraryThing member DRFP
A charming little novel by Sōseki. It doesn't contain the insight that his later novels do, as it races along at great pace, but it's a joyous, fun read. Botchan is forthright and impetuous yet one can't help being won over by his honesty and general decency. Not a novel to illuminate the human condition but a worthwhile read nonetheless.… (more)
LibraryThing member honotaku
Teacher goes mad in Matsuyama. Much lighter than Soseki's other novels.
LibraryThing member antiquary
One of the funniest books about teaching I have ever read. Though set in a rural Japanese school in the nineteenth century, much of it rings true today --student
pranks (the "fried prawns" incident is brilliant) -- faculty
rivalries, are all vividly portrayed.
LibraryThing member HadriantheBlind
A lighthearted, funny, very relatable novel. Anybody who's worked in a school setting can relate to this teacher, impertinent and brash and hilarious as he is.
LibraryThing member jorgearanda
I just can't see the supposed charm of this book. I'm tired of stories, real or fictional, where the supposed hero is a self-righteous, impulsive, ignorant, maniquean, violent, egocentric, stupid harbinger of Divine Retribution.
LibraryThing member missizicks
I much preferred this translation of Sōseki's classic tale of arrogant youth coming to terms with the realities of life. Botchan is cartoon like in his extremes, and very funny. His brief interlude among the inhabitants of a country town is infuriating and entertaining in equal measure.
LibraryThing member bokai
While Botchan is generally considered Souseki's most famous novel, I didn't enjoy it as much as I did Kokoro. The parallels between Botchan and Catcher in the Rye are numerous, so it's easy shorthand to that this is Japan's version of Sallinger's novel, even though the comparison isn't perfect. In both novels the protagonist expresses irritation with the world around him, and represents himself as a non-nonsense guy telling it like it is. Where Holden goes on about his phonies, Botchan is constantly complaining about the two faced nature of his associates. But Holden is an unreliable narrator, and a disturbed, anchorless boy. Botchan never appears to be more than exactly what he says. Maybe I'm missing the nuance, but I don't think there is any to find.

Not that that's bad. Animal Farm didn't have a drop of nuance but it's still a good, blunt little book. Botchan isn't going to get your brain going too hard unless you are already really interested in early 1900's Japan, but even though its target is a place from another time, people have not changed all that much, and it's still fun to read about a bunch of assholes getting their comeuppance.

My major gripe with the book is in the translation. I read the Sasaki version, and there were some places where he outright admitted that he couldn't translate a pun or joke. I would have preferred to read a translator's translation, something that worked through the knotty stuff in footnotes or something, but I can see how that might not be the preferred approach for the average reader.

Overall, if you found Holden Caulfield irritating you might like Botchan a little better (I did.) And if you want something much more upbeat than Kokoro Botchan fits the bill, although I think I Am A Cat is the better of Souseki's humorous works.… (more)
LibraryThing member missizicks
I can't find the version that I have on my e reader, so I'm using this one! My free version from Project Gutenberg is okay, but the translation is very of its time. The prose is a little stilted at times, but the humour of the story comes through. I prefer the Joel Cohn translation!
LibraryThing member stillatim
Very enjoyable read, a bit like early Evelyn Waugh filtered through someone who relishes the idea of writing in the voice of an uneducated, naive, morally upright young man, who is also a bit of a jerk. The translator does a pretty solid job, given that filter.
LibraryThing member alexrichman
Imagine that Holden Caulfield had a great uncle or something...who was a teacher in 19th-century Japan. Not a lot happens, but the pissy protagonist's 'all these bastards are out to get me' worldview is oddly charming. Cute.
Fewer

Kokoro by Natsume Soseki
Beauty and Sadness by Yasunari Kawabata
Masks by Fumiko Enchi
Rashomon and seventeen other stories by Ryunosuke Akutagawa
Naomi by Junʾichirō Tanizaki
1 more
The tale of genji by Murasaki Shikibu,
Fewer