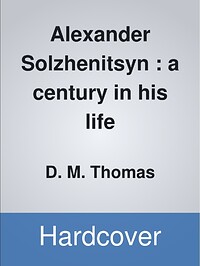 Alexander Solzhenitsyn : a century in his life

D. M. Thomas paints a deeply affecting portrait of the intricate relationship between Solzhenitsyn's life and his art, always framing this biography in the context of the historical times. Indeed, Thomas tells not only the harrowing and sorrowful tale of Alexander Solzhenitsyn's life but also the painful story of Russia itself, a country perpetually at war with itself and its own diverse people. Beginning with the years of Revolution and Civil War, Solzhenitsyn's dramatic life embodies the cruelty, passion, and chaos that have characterized Russian history over the last century. Thomas's account covers extensively all the major periods of the Russian author's remarkable life, from childhood to his years in the Stalinist labor camps, his battle against censorship and his expulsion from the U.S.S.R. in 1974, and his Vermont period and return to a Russia that has shed its Communist cloak but not its dark interior.… (more)

LibraryThing member PCorrigan
From my Amazon review:
I would concur with the excellent reviews here. Without resorting to hagiography we get I think a pretty well rounded portrait of a man. A great writer no doubt, a flawed, intensely driven human being as well. Solzhenitsyn the Giant-Slayer of the USSR! This biography deserves
Show More
4 stars just for being attempted on such a great man but it is also very well-written, comprehensive and thoroughly researched so I give it 5. Not sure I would need to tackle Scammell's bio after this. Still after reading this it is hard to imagine what it might have been like to sit down and have a few beers with Sanya and talk about the good old days. Or the bad new days or whatever. Solzhenitsyn wrote a book in the 'Gulag' that without any doubt belongs on a list (top 10, 25, 50..whatever) of the most important books ever written. Maybe not the best, but name any book with more a more important subject...how you liquidate 60 million humans (and almost not get caught)! It defies all imagination in its horror. This was a very 'readable' work and I have new tremendous new insight into the author Solzhenitsyn. My next project in Russia..'November 1916'! My only wish is for a few more photos! Maybe of the various iconic locations where he wrote, dachas and even East Prussia or Estonia or the Gulag sites of his experience would have been incredible.
Show Less