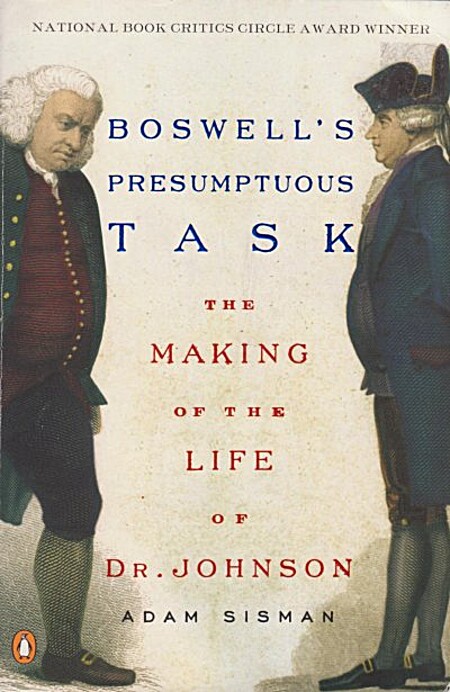 Boswell's presumptuous task : the making of the life of Dr. Johnson

"James Boswell's Life of Johnson is the most celebrated of all biographies, acknowledged as one of the greatest and most entertaining books in the English language. And yet Boswell himself has generally been considered little more than an idiot, tolerated by his friends as an agreeable scatterbrain, regarded by his contemporaries as a man of no judgement whatsoever, and condemned by posterity as a lecher and a drunk. How could such a fool have written such a book?" "This is the story of Boswell's "presumptuous task": his biography of Samuel Johnson. It traces the friendship between Boswell and his great mentor, one of the most unlikely pairings in the history of literature, and provides a fascinating and original account of Boswell's seven-year struggle to write the Life, following Johnson's death in 1784. At the time, Boswell was trying and failing to make his mark in the world, desperate for money, debilitated by drinking, torn between his duties at home as a Scots laird and the lure of London, tormented by rival biographers, often embarrassed, humiliated, or depressed. ("Many a time have I thought of giving it up," he confessed when the work was almost finished.) A dazzling study of the biographer at work, Boswell's Presumptuous Task movingly shows how a man who failed in almost everything else produced a masterpiece."--BOOK JACKET.… (more)

LibraryThing member literarysarah
It is not necessary to have read Boswell's Life of Samuel Johnson to appreciate Adam Sisman's book. He provides plenty of context and detail for readers who are less familiar with the literary and historical figures in eighteenth century England. In fact, though I read the Life of Johnson first, I would recommend doing it the other way round and starting with Sisman's narrative. Particularly interesting is the posterity section which charts the popularity and reputation of the Life (and its author) through the past two hundred years.… (more)
3 more
LibraryThing member moibibliomaniac
A perfect choice of a title by Adam Sisman!

In his Introductory Chapter of The Life of Samuel Johnson, James Boswell wrote:
"To write the Life of him who excelled all mankind in writing the lives of others, and who, whether we consider his extraordinary endowments or his various works, has been equalled by few in any age, is an arduous, and may be reckoned in me a presumptuous task."

I'm surprised that Boswell didn't spell the word "him" with a capital "H."

In his dictionary, Johnson defines the word Arduous as:
1. Lofty; hard to climb
2. Difficult

Boswell certainly had lofty expectations, especially since everyone else had already written their lives of Johnson. In his LOJ, Boswell shows some of Johnson's warts, but never enough to knock him off his pedestal. In his quasi-biography of Boswell, Sisman bares all, depicting Boswell at times as a drunken sot who may well have set the all-time record for contracting Gonorrhea. Sisman shows that Boswell made the task of writing Johnson's biography more difficult because of his drinking, and because of his desire to make a name for himself in other ventures, either as a lawyer or hopefully, as an appointed politician. But a brilliant writer Boswell was, and Sisman shows that as well, although Sisman credits Malone's editing with putting the icing on the cake. Malone had nothing to do with the second edition, and Sisman says that edition contains errors, which Malone corrected in the third edition after Boswell's death.
All in all, a good scholarly and pleasant read. Moi recommends.… (more)
LibraryThing member wagner.sarah35
I picked up this book primarily out of an interest in the late 18th century and for that it was a valuable read. Better than some authors and historians, this book delivers an idea of the forces and complexities of 18th-century life, through the perspective of James Boswell, the author of the seminal biography The Life of Dr. Johnson. Had I been more familiar with Samuel Johnson or the biography previously, I likely would have gotten more out of this book. Still, I enjoyed learning about both Johnson and Boswell, their relationship, and Boswell's effort to produce the definitive biography of his mentor.… (more)
LibraryThing member kerns222
well written book that will not keep you up too late at night. You can put it down most anywhere. Interesting facts. Interesting lives. Interesting books, journals, letters, and 18th century life. And lots of Johnsonalia for those who want it.
Fewer