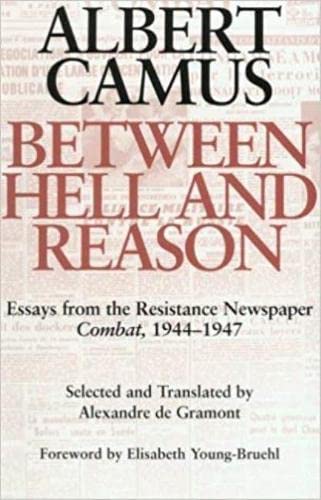 Between hell and reason : essays from the Resistance newspaper Combat, 1944-1947

"From 1943 to 1947, Albert Camus was editor-in-chief of the famous underground and post-Liberation French newspaper Combat. Among his journalist writings during this period were eloquent essays that grappled with questions of revolution, violence, freedom, justice, ethics, and the emerging social order. The 41 pieces collected here--most never before published in English--tell the story of a sensitive man's odyssey from "hell to reason" at a time of tremendous upheaval while also providing a missing link between Camus's pre-war and post-war works. Almost lyrical in their intensity of thought and language, these newspaper pieces show a Camus new to most American readers and are a unique testimony to an extraordinary period in history with parallels to current changes in Eastern Europe." "At the time of Liberation in 1944, Camus called for a revolution in French society, including a violent purge of those who had sided with the Nazis. When this turned into a near civil war of personal vendettas and summary executions, he gradually became disillusioned with his hopes for a new society. His later pieces in Combat show him arriving at a more moderate theory of revolt later echoed in such books as The Plague and The Rebel: the individual mattered above all, human life was greater than social goals. "I have come to the conclusion," he wrote, "that men who want to change the world today must choose one of the following: the charnel house, the impossible dream of stopping history, or the acceptance of a relative Utopia that still leaves man the choice to act freely.""--BOOK JACKET.… (more)

LibraryThing member baswood
Albert Camus from his early experience in the communist party in Algeria was convinced that politicians were either selfish and corrupt or dedicated to abstract goals or political dogma; all of which caused them to neglect the people they were supposed to serve. Camus was therefore well equipped to be the editor of a Parisian newspaper, but this was not just any old newspaper; "Combat" was the paper of the French resistance and when Paris was liberated from the Nazis in August 1944, the paper emerged from the underground with Camus as its editor and he looked forward to a new breed of politicians to get the country back on its feet after the horrors of occupation.

[Between Hell and Reason] contains just over 40 essays originally printed as editorials written mainly between August 1944 and November 1946, they average at about 1000 words per essay and are superbly written in clear and concise language. They serve to give an easily digestible potted history of Camus' political thought during the period, but just as importantly for the modern reader they provide a window on the struggles of France to come to terms with the Nazi invasion. In the book the essays are divided into three sections, the first covers the period from August 1944 to December 1944 and are full of hope for the future of France, but Camus sets his stall out in the very first essay written on the 21 August just a couple of days after the start of the insurrection by the Resistance against the German garrison:

"Combat against Nazi Germany continues; it will continue relentlessly. But even if this is the hardest of struggles for which all France has mobilised, it is not the only one we must fight. It will not be enough to return to the mere appearance of liberty with which France of 1939 had to be content. We will have accomplished only an infinitesimal part of our task if tomorrow's French Republic finds itself like the Third Republic, confined by the domination of Money.

We all know that the fight against privileges of money was always a favourite theme of Petain and his crew. But we also know that, since July 1940, Money has weighed more heavily on our people than ever before. For that is when Money, to conserve and increase it's privileges, hoisted traitors to power and deliberately tied it's interests to Hitler's"

Camus second essay written also during the insurrection is titled "They Shall Not Escape" and exhorts the Parisians to continue to erect barricades so that retribution can be carried out against the fleeing Germans. There follows a series of essays on some of Camus's favourite themes; Freedom and Justice, a continuation of the rebellion instigated by the resistance, fear that the old political order will be restored, social order, a new policy for the colonies and new forms of socialism. All these are written shortly after the liberation and are an attempt by Camus to have a voice in setting the agenda for the recovery of France. This section also contains his now notorious views that the purges against collaborators should be carried out. The final essay in this section finds Camus for the first time on the defensive; written in December 1944 it concerns what Camus sees as an offensive launched by the political right against the Resistance movement.

The second section of essays sees Camus in more sober and reflective mood, they start from the end of December 1944 and take us up to August 1945. The revolution in politics has not taken place and the Resistance movement has been sidelined. It contains Camus admission that he was wrong to support the purge, saying it has now gone astray and is a disgrace and France should move on, he is forced to re-state his paper's position on justice and democracy in politics, he takes a swipe at the Pope for supporting general Franco in Spain and for not declaring against the Nazis sooner than he did. Near the end of the section is his editorial on the bombing of Hiroshima, where he sees that world politics have changed for ever and humanity's hope now must lie with international efforts for world peace.

The third section is entitled "Neither Victims nor Executioners" and the standard of writing is maintained as Camus takes stock of a changing world and the changes that have come upon him over the previous two years. This is reflected in his brilliant editorial in November 1946 titled "To Save Lives":

It is a peculiarity of our times. We make love by telephone, we no longer work with material but with machines, and we kill and are killed by proxy. We gain in neatness but lose in understanding......... People like myself want not a world where murder no longer exists (we are not so crazy as that!), but one where murder is no longer legitimized. Here we are indeed Utopian - and contradictorily so. For we live in a world where murder is legitimised, and if we do not like that we must change it. But it seems we cannot change it without running the risk of murder. Murder thus brings us back to murder, and we will continue to live in terror whether we accept it with resignation or suppress it with means that substitute one form of terror for another.

The essays are selected and translated by Alexandre de Gramont who also writes an excellent introductory essay that fills in the background and puts the essays in the context of their times. That the essays are important historical documents goes without saying, but when they can still provide plenty of food for thought and maintain a quality of writing that manages to stay on the right side of bluster then for me they are a five star read.… (more)

Albert Camus : a life by Olivier Todd
The myth of Sisyphus, and other essays by Albert Camus
Exile and the Kingdom by Albert Camus
Baudelaire by Jean-Paul Sartre
The collaborator : the trial & execution of Robert Brasillach by Alice Yaeger Kaplan