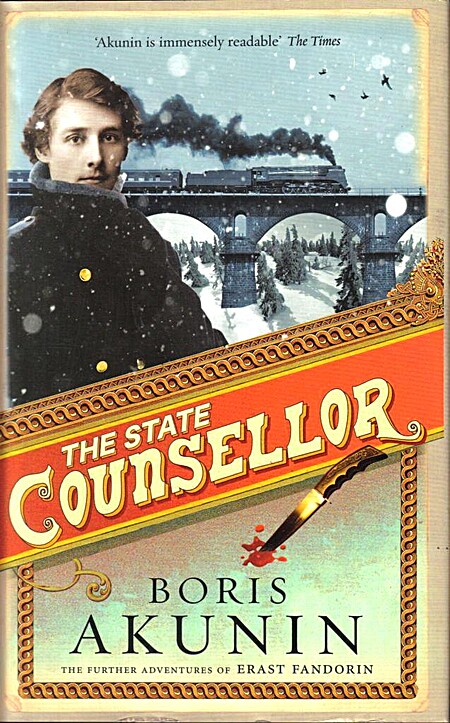 The reactionary Adjutant General Khrapov, newly appointed governor-general of Siberia and soon-to-be minister of the interior, is murdered in his official saloon carriage on his way from St. Petersburg to Moscow. The killer, disguised as Fandorin, boards the train at Klin, where it has been delayed by snowdrifts on the line. He leaves a knife bearing the initials "CG" (Combat Group) thrust up to the hilt in his victim's chest and escapes through the window of the carriage. Fandorin is first arrested for the crime, but quickly released when the train pulls into Moscow and the General's staff realise their blunder. The murder threatens the career of Prince Dolgorukoi, Moscow's elderly governor-general, and Fandorin's greatest fan. He asks Fandorin to investigate, even though someone new, Prince Pozharsky, has been sent from St. Petersburg to head the investigation. The head of the CG is a man named Mr. Green, the son of a Jewish pharmacist whose family suffered very badly from the pogroms. He bears a grudge and, together with his fellow revolutionaries, seeks vengeance. He is a man of steel, who has toughened himself so much that he is a worthy, and daunting, adversary.However, this is a battle between good and evil and Fandorin reminds us that two wrongs never make a right as he battles against Green in a test of wills.… (more)

LibraryThing member ericlee
I'm a great fan of Akunin and have read all his Erast Fandorin novels. This is in a way the most interesting of them all - and perhaps the last? Akunin in this novel takes on an aspect of the history of the tsarist police which he didn't touch in earlier books -- the infamous strategy of provokatsiia. Though he changes the names, anyone familiar with the history of the Okhrana will recognize super-agent Azef and his handlers. The book is extraordinarily relevant to today's "war on terror" and shows the tsarist regime as being too clever by half in its effort to manipulate rather than destroy the terrorist underground. I hope there will be more after this one ...… (more)
3 more
LibraryThing member polarbear123
Always the same, always different. Every Fandorin mystery is unique but easily recognisable. WOnderful storytelling, revealing, deep but with an overwhelming sense of fun also. Anyone who loves a good mystery will lap this stuff up. Fandorin is a legendary character.
LibraryThing member mcdenis
State Counsellor Erast Fandorin in his role as detective is charged not only to protect but also to bring to justice revolutionaries who are assassinating key political figures in the Tsar’s regime. The lengthy novel deftly moves the reader within the historical background of Imperial Russia and all its foibles and greedy intrigues. It is an excellent translation.… (more)
LibraryThing member ffortsa
This is the latest entry I could find in the series by Akunin that features Ernst Fandorin, a gifted and sometimes cursed detective operating in old Russia before WWI. I think the first of these occurs during the Crimean War, or at least a war with Turkey.

In this one, Fandorin has signed on as a Counsellor with a prince who also runs the various police departments in Moscow, just as the anarchist movement is blowing things up. The dual track of the anarchist leader and Fandorin is well managed, and the subtle politics is definitely worth the read.

note: Fandorin has spent time in the East, and has a Japanese manservant and physical trainer who could have been the straightfaced basis for Inspector Clouseau's manservant in the Peter Sellers movies. Fandorin's guests are inevitably surprised by the man and the physical training they witness.… (more)
Fewer