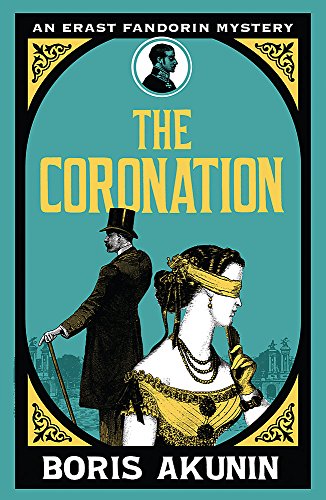 Grand Duke Georgii Alexandrovich arrives in Moscow for the coronation, accompanied by three of his children and their alluring governess, Mademoiselle Declique. During an afternoon stroll, daughter Xenia is dragged away by bandits, only to be rescued by an elegant gentleman and his oriental sidekick. The passing heroes introduce themselves as Fandorin and Masa, but panic ensues when they realise that four-year old Mikhail has been snatched in the confusion. A ransom letter arrives from Dr Lind, an international criminal and the Moriarty to Fandorin's Sherlock Holmes. The letter demands the handover of the Count Orlov, an enormous diamond on the royal sceptre which is due to play a part in the coronation. Fandorin suggests that the value of the stone is paid in 'installments', buying the party a week to ensure the young boy's safe return. But can the gentleman detective find Mikhail in time, or will the Grand Duke's son meet with the same gruesome fate as Lind's last abductee - whom Fandorin could do nothing to save? Will Fandorin succumb to the affections of Xenia? And why is he falling to his death on the very first page? Our inimitable hero returns in a tantalisingly closely-matched battle of wills and of wiles.… (more)

LibraryThing member Clara53
Brilliant. Akunin never disappoints. "The Coronation" is one of his best. Even though it's really hard to pinpoint the best - his writing is superb throughout. Here the story is told on behalf of the Head Butler for the royal/tzarist family - and how excellently told: with all the nuances of a person firmly established in his position; so we end up with two protagonists: Fandorin himself and Afanasii the butler, who inadvertently and reluctantly becomes our hero's helper, while vacillating between distrust and admiration for Fandorin. The mystery plot is skillfully sculpted on the background of real historical events - the coronation of the last Russian tzar and the horrible aftermath on the fairgrounds celebrating it.

The original Russian version came out a while ago, but I missed it somehow. English translation doesn't disappoint at all, though. An excellent, unforgettable read!!!… (more)
7 more
LibraryThing member AssaphMehr
This is one book that deserves six stars. By far my favourite of the Erast Fandorin novels, a series of tremendous novels.
This is a must read, for anyone who enjoys historical detectives, Tsarist Russia or plain good fiction.
LibraryThing member Literary_butterfly
I had never heard of Boris Akunin's Erast Fandorin mysteries until I went hunting on the internet for another book narrated by a butler. The series is massively poplar in Russia (think Harry Potter and you'll be close) and has been translated into English by Andrew Bromfield. The Coronation is the seventh book in the series.

Erast Fandorin is a celebrated detective who seems to be more in the mould of Sherlock Holmes than Hercule Poirot. After a rather slow start, Fandorin first appears in the book as a stranger who saves one of the Tsar's cousins from kidnap, but unfortunately allows another cousin to be kidnapped instead. It soon becomes clear that the kidnap has happened on the orders of Fandorin's arch-enemy, the Moriarty-esque Dr Lind - a baddy with absolutely no redeeming features whatsoever. The ransom demanded is a diamond without which the coronation of Tsar Nicholas II cannot take place. Fandorin is employed to attempt to retireve the child without handing over the diamond - the loss of which would apparently bring more shame and distress to the royal family than the kidnap and death of its youngest member.

The book's narrator is Afenasii Ziukin, butler to one of the Tsar's uncles. I can see why authors find it a useful device to use a servant as narrator - by their nature they are present at most of the action but are able to comment on it dispassionately. However Ziukin gets himself involved in the action, taking it upon himself to try to investigate the case and carry out several daring missions of his own - most of which end in disaster or with the need to be bailed out by Fandorin. Every detective must have a bumbling sidekick and Ziukin is certainly Fandorin's.

I suppose it's always going to be difficult jumping into a series halfway through - in fact it's something I don't usually do. The Coronation does, in fact, work fairly well as a stand-alone book, but I probably missed out by not knowing any of Fandorin's back story. I think I was supposed to like and trust Fandorin from the beginning, but in common with Ziukin, I had never met him before and consequently didn't warm to him very much. In a way this didn't really matter, as Fandorin is less the protagonist of the book than Ziukin himself, and I did very much like the butler's character.

I can only assume that Akunin has read The Remains of the Day and I wouldn't be surprised if this book was an intentional homage to Ishiguro. Like Stevens in The Remains of the Day, Ziukin is pompous, obsessed with the idea of dignity and utterly blind to the attentions of his female colleague. He is, however, brave (to the point of stupidity) and flawed enough to appear human. Very few of the rest of the characters made much of an impression on me. To be honest I had a hard time differentiating one from another, especially as they tend to be referred to variously by their given name and patronymic, or their surname. Working out who was who was sometimes a challenge.

One element of the book that I really liked was its basis in Russian history. The coronation of the title is that of Tsar Nicholas II and Akunin makes use of several events of the time, including the Khodynka tragedy, in which over a thousand people died in a stampede at the coronation festivities. Akunin obviously knows his period well and pays minute attention to historical detail which makes the book really fascinating and entertaining reading.

On the whole though, I found the book rather difficult reading. I struggled to get into it, and even when the action began I just wasn't gripped or convinced enough by the story to care too much about what happened. Most of the action sequences verged on the farcical, which made the book a fun read but not one that I was able to get too emotionally involved in. Having said that, I loved the plot twist at the end, which I absolutely hadn't seen coming and which finally gripped me - just a little too late.

I can't say that The Coronation has turned me into another of Akunin's many fans, but I feel a bit bad dismissing a book that comes so late in the series. At some point I'll probably give a Fandorin book another go and see if the detective or his author can change my mind.… (more)
LibraryThing member polarbear123
What I like about the fandom in books is that akunin finds a way to breathe new life into each mystery. Here the narrative is from the point of view of the butler. Weird at first but a master stroke as the story goes on. A class act
LibraryThing member jetangen4571
This book is wonderful and it made me work to fact check what things were like in Russia before the Bolshevik Revolution.
As for the detective Fandorin, he is resourceful, athletic, a master of disguises, insightful, is plagued by a nemesis, is a master of logic, and has a very useful sleuthing partner. Sound somewhat familiar? But he is definitely his own character, just as Russia is quite dissimilar from England even in this time of the final days of the tsars.
The investigation of the kidnapping mastermind, evil as he is, is full of twists and red herrings as well as action and adventure and is related by the chief butler to the royals who involves himself even more than he expects to.
This is one in a series ably translated by Andrew Bromfeld, but any floundering by this reader is not the fault of the author or translator, but my own ignorance of Russian history.
I requested and received a free ebook copy from Grove Atlantic via NetGalley. Thank you!… (more)
LibraryThing member Maura49
The dashing Erast Fandorin is in Moscow, joining the many gathered to celebrate the coronation of Tsar Nicholas 11, the last Romanov monarch although no-one knows this of course. The story is narrated by Afanasii Stepanovich Ziukin who is the very upright butler to Grand Duke Georgii Alexandrovich.
His ordered world is shattered when the youngest child of the Grand Duke, Mika, is kidnapped. The kidnappers chief is Dr Lind an old adversary of Fandorin's who is drawn into an involved and drawn out rescue plan.
We see Fandorin from Ziukin's point of view and he is something of an unreliable narrator. He takes a dislike to Fandorin and is prejudiced against him. He has always lived as a servant to the Grand Duke, a rather blinkered existence and one slowly realises that what he sees may not be accurate, and may even be damaging to Fandorin's plans.
Ziukin shares in the action, dragged along in the detective's wake and embroiled in the fantastic ideas of Endlung, a friend of Pavel Georgievich, the impressionable eldest son of the Grand Duke.
Below the surface one has the awareness of history on the move, with many hints that Nicholas' reign will be bad for Russia. One's awareness of the fate of the Tsar and his family colour one's reading of a thrilling and poignant story full of danger, love and violence.… (more)
LibraryThing member janerawoof
At various times I've read the whole series that's been translated into English so far, and consider this episode the best so far. Narrated by the butler to one of the Romanov royal family, this tells of the coronation of Nicholas II--really, the kidnapping of one of the sons, a little boy, Mika, and the efforts of Fandorin, the butler, Afanasy, and others to rescue him and to keep out of the hands of the archcriminal, Dr. Lind, the Orlov diamond, which will play a part in the coronation. As ransom, Dr. Lind, asks for various Romanov jewels but consents to the family's "renting" the diamond until after the coronation then making the exchange. Incredible unexpected developments all through the story keep up the non-stop action. The conclusion came completely out of the blue!

Highly recommended.… (more)
LibraryThing member jetangen4571
This book is wonderful and it made me work to fact check what things were like in Russia before the Bolshevik Revolution.
As for the detective Fandorin, he is resourceful, athletic, a master of disguises, insightful, is plagued by a nemesis, is a master of logic, and has a very useful sleuthing partner. Sound somewhat familiar? But he is definitely his own character, just as Russia is quite dissimilar from England even in this time of the final days of the tsars.
The investigation of the kidnapping mastermind, evil as he is, is full of twists and red herrings as well as action and adventure and is related by the chief butler to the royals who involves himself even more than he expects to.
This is one in a series ably translated by Andrew Bromfeld, but any floundering by this reader is not the fault of the author or translator, but my own ignorance of Russian history.
I requested and received a free ebook copy from Grove Atlantic via NetGalley. Thank you!… (more)
Fewer