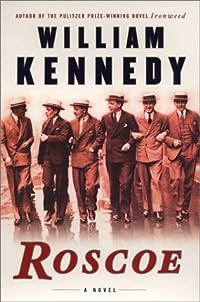 From the Pulitzer-Prize winning author of Ironweed and Legs, Roscoe is a comic journey into the dark heart of America's postwar Democratic dream.; It's V-J Day, World War II is finally over, and Roscoe is quitting politics after twenty-six years as chief brainstruster of Albany's notorious Democratic machine. The suave, brilliant, unscrupulous Falstaffian wants to hang up his white double-breasted Palm Beach suit and drift into retirement. But how will he relax his hold on the lid without the political pot boiling over, scalding his beloved and her family? Armed with the politician's most powerful credo - 'Righteousness doesn't stand a chance against the imagination' - Roscoe fights his final political battles. Every step forward leads Roscoe into the past - to the early loss of his true love, to his own particular heroics in World War I, the takeover of City Hall and the methodical assassination of the gangster Jack 'Legs' Diamond. Roscoe is a comic masterpiece from one of America's most revered novelists.… (more)

LibraryThing member Griff
Many years ago I happened upon Ironweed by William Kennedy (his Pulitzer Prize winner) but for some reason never finished it. While in Stratford a few weeks ago, I strolled down Ontario Street after finishing my coffee at Balzac's and on a sidewalk table in front of The Book Vault were a number of books priced at $3.99 (Canadian) or less. There actually was a remarkable collection - and I picked up a few by T.C. Boyle, Robertson Davies - and Roscoe by WK.

Upon my return from Stratford, I started Ironweed again - one of the early "Albany series" books. It is a remarkable portrayal of the life of down and out Francis Phelan - and his street friends. It may very well change your view of those living on the street, if nothing else - a wonderful book of redemption (in his own way).

I finished Ironweed in Savannah this week and started Roscoe during my return flight. It provides more on the Albany political scene in the 40's, with great characters that quickly come to life.… (more)
3 more
LibraryThing member novelcommentary
The wonderful character of Roscoe adds to Kennedy's impressive array of heros of the Albany region. It is 1945, the war just ended and Roscue is the fixer of all things political and emotional. It seems the powerfcul democratic party could not survive without Roscoe behind the scenes. "He rigs elections and hands out innumerable bribes, covers up a suicide, whitewashes a murder and double-crosses a blackmailer. He also uncovers a terrible secret and tells it to no one, and then sacrifices himself for love. "(reviewer)
Just makes me want to read the rest of this series.
The men in this novel live in a time where they controled everything -the city, the money, the women they loved. Roscoe things he wants out of politics and he knows he loves his best friend's wife, but you can't always get what you want. Memorable scenes include a cock fighting match, a creative trial strategy and a reconnecting of old loves. Highly recommend to all… (more)
LibraryThing member VashonJim
Good characters in this foray into political intrigue in upstate New York.
LibraryThing member JBD1
Kennedy's best, I think. A brilliantly-written look at New York machine politics.
Fewer

Independence day by Richard Ford
A Flag for Sunrise : a novel by Robert Stone
Charming Billy by Alice McDermott
The march : a novel by E. L. Doctorow
Continental Drift by Russell Banks
5 more
A frolic of his own: a novel by William Gaddis
Outerbridge Reach by Robert Stone
Tree of smoke by Denis Johnson
Forgetfulness by Ward Just
A good scent from a strange mountain : stories by Robert Olen Butler
Fewer