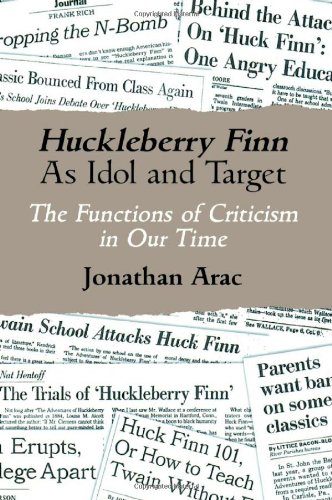 Huckleberry Finn as idol and target : the functions of criticism in our time

"If racially offensive epithets are banned from network airtime and the pages USA Today, Jonathan Arac asks, shouldn't fair hearing be given to those who protest their use in an eighth-grade classroom? Placing Mark Twain's comic and beloved masterpiece, Huckleberry Finn, in the context of long-standing American debates about race and culture, Jonathan Arac has written a work of scholarship in the service of citizenship."--BOOK JACKET. "Arac does not want to ban Huckleberry Finn, but to provide a context for fairer, fuller, and better-informed debates. He revisits the era of the novel's setting in the 1840s, the period in the 1880s when Twain wrote and published the book, and the post-World War II era, to refute many deeply entrenched assumptions about Huckleberry Finn and its place in cultural history. Commenting on figures from Harriet Beecher Stowe, Frederick Douglass, Ralph Ellison and Lionel Trilling to Leo Marx, Archie Bunker, Shelley Fisher Fishkin, and Mark Fuhrman. Arac's discussion is trenchant, lucid, and timely."--Jacket.… (more)

Was Huck Black? : Mark Twain and African-American voices by Shelley Fisher Fishkin
On the shoulders of giants : a Shandean postscript by Robert King Merton
The leopard's spots : scientific attitudes toward race in America, 1815-59 by W. Stanton
Cane: An Authoritative Text, Backgrounds, Criticism by Jean Toomer
Master Humphrey's clock : and A child's history of England by Charles Dickens
3 more
In these great times : [a Karl Kraus reader by Karl Kraus
Nathaniel Hawthorne : a life by Brenda Wineapple
The Intellectual Devotional Biographies : Revive Your Mind, Complete Your Education, and Acquaint Yourself with the World's Greatest Personalities by David S. Kidder
Fewer