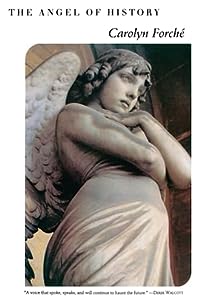 The angel of history

Carolyn Forche is known as one of our most important contemporary poets. Her first book, Gathering the Tribes, won the Yale Younger Poets Award. Her second, The Country Between Us, won both the Lamont Poetry Award and an award from the Poetry Society of America. Although The Angel of History is a departure from her previous books, it contains echoes of both earlier volumes. Placed in the context of twentieth-century moral disaster - war, genocide, the Holocaust, the atomic bomb - Forche's third collection of poems is a meditation on memory, specifically on how memory survives the unimaginable. The poems reflect the effects of such experience: the lines, and often the images within them, are fragmented, discordant. But read together, these lines become a haunting mosaic of grief, evoking the necessary accommodations human beings make to survive what is unsurvivable. These are personal poems, poems startling in their honesty and humility, poems that bear witness rather than explain or resolve. Carolyn Forche describes her book in a note to the reader: "The Angel of History is not about experiences. It is for me the opening of a wound, the muffling and silence of a decade, and it is also a gathering of utterances that have lifted away from the earth and wrapped it in a weather of risen words. These utterances issue from my own encounter with the events of this century but do not represent 'it.' The first-person, free-verse, lyric-narrative poem of my earlier years has given way to a work which has desired its own bodying forth: polyphonic, broken, haunted, and in ruins, with no possibility of restoration." An ambitious and compelling collection, The Angel of History may also be groundbreaking. As poets have always done, Forche attempts to give voice to the unutterable, using language to keep memory alive, relive history, make tracks in an empty field, and link the past with the future.… (more)

LibraryThing member ValSmith
The only book of Carolyn's I own. She lived near me in Michigan, and I once dedicated a poem called "Northville" to her. This is a powerful and mood-evoking collection.