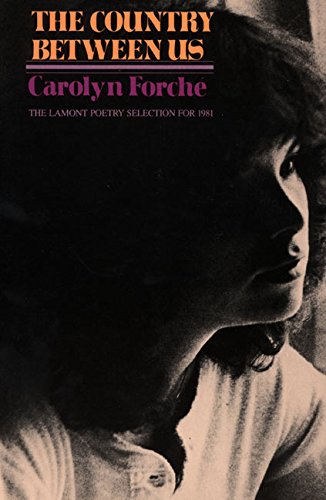 The country between us

"Here is poetry of courage and passion, which manages to be tender and achingly sensual and what is often called 'political' at the same time. This is a major new voice." -- Margaret Atwood The Country Between Us opens with a series of poems about El Salvador, where Carolyn Forché worked as a journalist and was closely involved with the political struggle in that tortured country in the late 1970's. Forché's other poems also tend to be personal, immediate, and moving. Perhaps the final effect of her poetry is the image of a sensitive, brave, and engaged young woman who has made her life a journey. She has already traveled to many places, as these poems indicate, but beyond that is the sense of someone who is, in Ignazio Silone's words, coming from far and going far.… (more)

LibraryThing member abirdman
This book is a river of sadness and strength. Taking as a point of departure the struggles of Latin America, the poet manages to reveal the hurt without taking sides. Deeply political but not divisive.
4 more
LibraryThing member MusicMom41
Carolyn Forche was a journalist for Amnesty International and a human rights advocate who spent much time in El Salvador in the ‘70s chronicling the war and the struggles of the people there. Her poetry often combines the personal with the political seamlessly and need several readings to be able to truly appreciate all she puts into her poems. This volume won the Lamont Poetry Prize in 1981. Forche is also the editor of Against Forgetting: Twentieth-century Poetry of Witness, an anthology of poetry of poems from every war in that century.

Elena was a friend of Forche whose husband was a journalist who was critical of the government. One evening as the couple came home from a dinner celebrating their wedding anniversary there were government troops waiting for them to gun them down. She was wounded in the mouth and her husband was killed. Elena was scheduled to be executed but there were so many street demonstrations supporting her that she was allowed to go into exile..

IN MEMORY OF ELENA

We spend our morning
in the flower stalls counting
the dark tongues of bells
that hang from ropes waiting
for the silence of the hour.
We find a table, ask for paella,
cold soup and wine, where a calm
light trembles years behind us.

In Buenos Aries only three
years ago, it was the last time his hand
slipped into her dress, with pearls
cooling her throat and bells like
these, chipping at the night—

As she talks, the hollow
clopping of a horse, the sound
of bones touched together.
The paella comes, a bed of rice
and camarones, fingers and shells,
the lips of those whose lips
have been removed, mussels
the soft blue of a leg socket.

This is not paella, this is what
has become of those who remained
In Buenos Aires. This is the ring
of a rifle report on the stones,
her hand over her mouth,
her husband falling against her.

These are the flowers we bought
this morning, the dahlias tossed
on his grave and bells
waiting with their tongues cut out
for this particular silence.… (more)
LibraryThing member rachelprz
The poems about El Salvador were wrenching. Wonderful poems.
LibraryThing member snash
[The Country Between Us] is a book of poetry about man's horrific inhumanity to man from El Salvador to Serbia and beyond, it's affect on the observer as well as the victim, and the impossibility of overcoming it. Much of the imagery was stunning and unique. Excellent but difficult to read.
LibraryThing member cabockwrites
"There is nothing one man will not do to another." With all going on at our southern border, I felt I had to re-read Forche's poems about El Salvador written in 1978-80.
Fewer