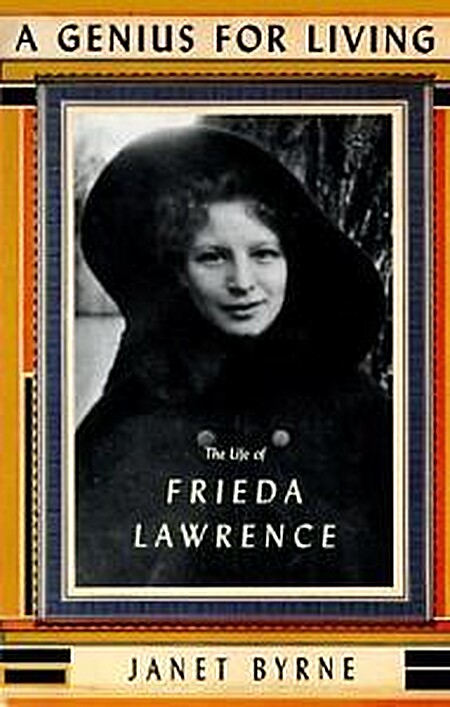 A Genius for Living : The Life of Frieda Lawrence

With lively intelligence and keen psychological insight, Janet Byrne tells the story of Frieda Lawrence's rich and tumultuous life, from her aristocratic Prussian childhood in one of the most divided regions of Europe, through her first marriage to a staid English professor in Nottingham; her wild affair with the cocaine-addicted psychoanalyst and free-love advocate Otto Gross; the scandalous abandonment of her husband and three children for the love of a coal miner's son who would become one of the twentieth century's greatest novelists; and her later years in and near Taos, New Mexico, first with Lawrence and then with her third husband, the handsome and massively unfaithful Angelino Ravagli, a former sharpshooter in the Italian army. Frieda is "in" every major novel D.H. Lawrence wrote during their eighteen years together, from The Rainbow and Women in Love to Lady Chatterley's Lover. She was his most trusted reader; his dependence on her was absolute. Hardly the untutored earth mother or sexual libertine frequently portrayed in books about Lawrence, Frieda had an uncanny and complex vision of relations between the sexes and a blithe, aggressively anti-intellectual surefootedness that helped shape one of the most famously embattled unions of the century as well as its literary progeny. Drawing on scores of unpublished archival sources, memoirs, and interviews with friends and relatives, Janet Byrne has brilliantly captured Frieda's peculiar genius in this compelling biography, a dramatic saga of individualism, humor, will, and creative energy.… (more)

The Priest of Love: A Life of D. H. Lawrence by Harry Thornton Moore
Lawrence and the Women: The Intimate Life of D.H. Lawrence by Elaine Feinstein
Vanessa Bell by Frances Spalding
Less than a treason : Hemingway in Paris by Peter Griffin
T. H. White; a biography by Sylvia Townsend Warner
4 more
Genius in disguise : Harold Ross of the New Yorker by Thomas Kunkel
A Serious Character: The Life of Ezra Pound by Humphrey Carpenter
What's O'Clock by Amy Lowell
Anne Sexton : a biography by Diane Wood Middlebrook
Fewer