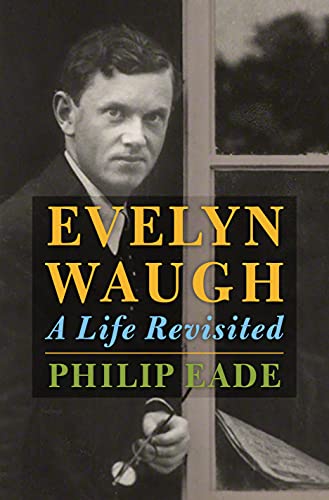 "On the fiftieth anniversary of Evelyn Waugh's death, here is a completely fresh view of one of the most gifted--and fascinating--writers of our time Graham Greene hailed Evelyn Waugh as "the greatest novelist of my generation," and in recent years Waugh's reputation has only grown. Now, half a century after Waugh's death in 1966, Philip Eade has delivered a hugely entertaining biography that is both authoritative and full of new information, some of it sensational. Drawing on extensive unseen primary sources, Eade's book sheds new light on many of the key phases and themes of Waugh's life: his difficult relationship with his embarrassingly sentimental father; his formative homosexual affairs at Oxford; his unrequited love for various Bright Young Things; his disastrous first marriage; his momentous conversion to Roman Catholicism; his unconventional yet successful second marriage; his checkered wartime career; and his shattering nervous breakdown. Along the way, we come to understand not only Waugh's complex relationship with the aristocracy, but also the astonishing power of his wit, and the love, fear, and loathing that he variously inspired in others. Waugh was famously difficult, and Eade brilliantly captures the myriad facets of his character even as he casts new light on the novels that have dazzled generations of readers"--… (more)

Claremont Review of Books
Eade recounts Waugh’s life in an admirably economic, straightforward manner, with a nice sense of measure and in a prose style free of jargon and cliché. He neither Freudianizes Waugh nor condemns his lapses into social savagery. Without a trace of tendentiousness, free of all doctrine, the biographer seeks to understand the strange behavior of his subject through telling the story of his life without commenting censoriously on it.

LibraryThing member michaelg16
I have been reading and greatly enjoying Waugh for many years and I sat rapt as a young man as Brideshead Revisted was broadcast week after week on PBS in the 1980's. Through the years I have read many things about Waugh and his circle, so this biography was less than enlightening for me though it offers some freshness and a unique perspective that made me occassionaly pause. In the end, I came away with the uneasy impression that Philip Wade didn't really like the man he was writing about -which is fine - but also that he didn't really understand why or even that he was a great writer. Hmm?… (more)
10 more
LibraryThing member John_Vaughan
As I wrote in a previous review ...Evelyn was hilarious, uproariously rude, pedantic, dogmatic, deeply religious, prudish and a true English eccentric. I enjoyed Philip Eade's portrait of his talented wit, courage and privileged life but - as it is a review copy - missed the photographs.

I love reading about this extremely talented family, and reading any of their works. I have some 18 books in my collection. My favorite author of the family - after Evely himself-is probably "Bron", but Evelyn's brother Alec's biographical history of the Waugh family "Fathers and Sons" is excellent.

And I can recommend this life (admittedly a Re-Visit) as an ideal entry point to and new Waugh readers.… (more)
LibraryThing member dhelmen
A thoroughly enjoyable biography of a writer I have always enjoyed. I was not familiar with the early life of Waugh, and enjoyed the insight into the family that shaped him. A biography that is as enjoyable as a novel is a great thing, and Eade has definitely accomplished that.
LibraryThing member SigmundFraud
It was time for a new biography of Evelyn Waugh and this one does justice to him and his writing. I happen to love mid century English writers and Waugh is one of the best along with some of my other favorites like Nancy Mitford, Graham Greene and Somerset Maugham. The biography is exhaustive and sometimes exhausting. The author devoted forty percent of the book to Waugh's first 25 years, including a detailed study of his antecedents. I could have done with less of that and more of the years when he was writing his major novels. I just finished reading Philip Ziegler's biography of Lady Diana Cooper who was a close friend of Waugh's. The books have many similarities as they socialized with many of the same people. The two biographies are also written in similar styles. Both with lots of name dropping. But if you are interested in Waugh this book is definitely worth a detour.… (more)
LibraryThing member etxgardener
There are two camps of people. Those who like to red literary biographies to obtain a decoder ring (so to speak) for an author's works of fiction an those who would prefer to remain in the dark. I am definitely in the former camp. PhilipEade's new biography of Evelyn Waugh proveds an excellent decoder ring to his body of ork - especially to his best known novel - Brideshead Revisited

Waugh was a brilliant writer, but an insecure man owing to his father's well known preference for his older brother, his short stature, his chagrin at going to a second rate public school, and his failure to succeed academically at Oxford. His defense mechanisms were large quantities of alcohol, an acerbic wit. and then, later in life teh Catholic church.

I don't think this book covers much new ground in Waugh's life story, but for those who are unfamiliar with him, this is a well researched and written survey of his life.… (more)
LibraryThing member chrisac
My previous knowledge of Evelyn Waugh was his authorship of “Brideshead Revisited” which was the television event of the early 1980s, which starred Jeremy Irons in one of his first big roles.

I was curious to learn more about Evelyn Waugh’s life, which was why I put in for an Early Reviewers copy of “Evelyn Waugh: A Life Revisited”. I also read and very much liked Philip Eade’s earlier biography of Prince Philip, Duke of Edinburgh.

I found this biography to be very detailed, and while I learned more about the author’s life and family, I felt it difficult to get through, with so many names and places I was not familiar with. This book, for me, was a slow read, but it did inspire me to want to watch “Brideshead” once more and perhaps to look for and read some more of Waugh’s work.

One thing that disappointed me was that Waugh’s family tree as well as photographs of him, his family, friends, and important places were all omitted, most likely because this was a review copy.

This book is recommended to those who are fans of Evelyn Waugh and his works. It is chock full of details, some titillating, some rather boring, but it is a carefully woven narrative of the life of one of the great English authors.… (more)
LibraryThing member kerns222
A detailed, readable, and sympathetic bio of one nasty, little shit. Waugh lacks compassion, overflows with arrogance, and is unable to understand the 20th century. He was recognized as a great stylist and a diligent worker (when he was in the mood). Now to find a critical bio. Any suggestions?
LibraryThing member Schmerguls
5483. Evelyn Waugh A Life Revisited, by Philip Eade (read 7 Jul 2017) This is a 2016 biography which as soon as I saw it I wanted to read, even though on 18 Nov 1983 I read Christopher Sykes biography, as well as having read the first volume of Waugh's autobiography--the only part he wrote--on 6 May 2009. I have read 16 books by Waught, though there are 15 books he published which I have not read. But I have read his major works. This biographyby Eade tells of his life and does not analize his work to any extent. Waugh was a genius but certainly was a weird person in some ways. His youth was misspent but after his second marriage he apparently led a mostly moral life--in contrast to his youthful pre-Catholic days--though of course he drank too much and he was beastly to many..… (more)
LibraryThing member RoseCityReader
Philip Eade’s new biography of Evelyn Waugh focuses on Waugh’s personal life rather than his books. Using some new primary sources, Eade reviews Waugh’s family history, his childhood, education, two marriages, conversion to Catholicism, and the development of his character prior to his death at age 62 in 1966.

Waugh is a difficult character, with many flaws but a lot of charm. Eade stays out of the way and lets Waugh come through as is. A good introduction to the man, but look elsewhere for an an analysis of his books.… (more)
LibraryThing member amanda4242
I've been a fan of Waugh for years but knew little about his life, so I was very happy to win Eade's biography. I found it an engaging and enlightening read--I had no idea quite how autobiographical some of Waugh's novels are! Highly recommended.
LibraryThing member MareF
This was a good introduction to the author for me. I enjoyed the insights and look forward to reading his books and letters.
Fewer