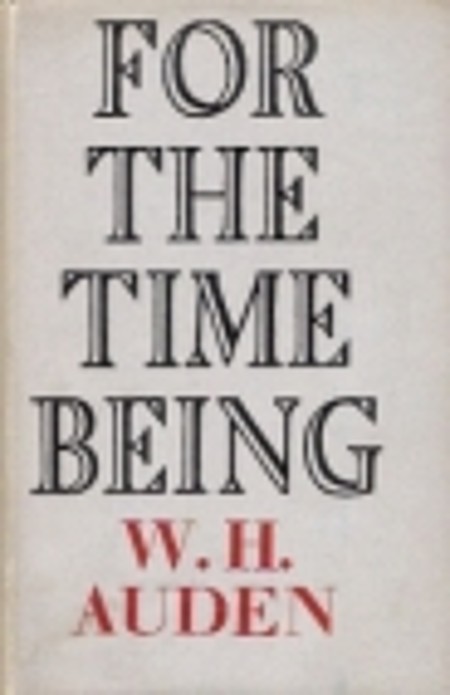 For the time being

"For the Time Being is a pivotal book in the career of one of the greatest poets of the twentieth century. W. H. Auden had recently moved to America, fallen in love with a young man to whom he considered himself married, rethought his entire poetic and intellectual equipment, and reclaimed the Christian faith of his childhood. Then, in short order, his relationship fell apart and his mother, to whom he was very close, died. In the midst of this period of personal crisis and intellectual remaking, he decided to write a poem about Christmas and to have it set to music by his friend Benjamin Britten. Applying for a Guggenheim grant, Auden explained that he understood the difficulty of writing something vivid and distinctive about that most clichéd of subjects, but welcomed the challenge. In the end, the poem proved too long and complex to be set by Britten, but in it we have a remarkably ambitious and poetically rich attempt to see Christmas in double focus: as a moment in the history of the Roman Empire and of Judaism, and as an ever-new and always contemporary event for the believer. For the Time Being is Auden's only explicitly religious long poem, a technical tour de force, and a revelatory window into the poet's personal and intellectual development. This edition provides the most accurate text of the poem, a detailed introduction by Alan Jacobs that explains its themes and sets the poem in its proper contexts, and thorough annotations of its references and allusions." --from inside jacket.… (more)