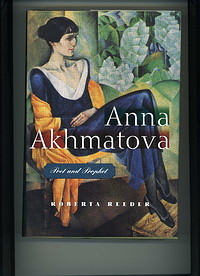 "Tall, slender, austere, with features that were described as haunting and hypnotic, Akhmatova possessed a quiet reserve, combined with an unusual intensity, that early on attracted fellow artists. As Picasso changed the face of art, Akhmatova would revolutionize the poetic vision of her contemporaries, for it was she who introduced the laconic style of twentieth-century poetry that seemed to blend in with the modernist forces of her age. One of those writers on whom she cast her spell was Nicholas Gumilyov, a swashbuckling Hemingway type, an eminent literary figure in his own right, who became her first husband. On their honeymoon, they went to Paris in 1910, where they met Modigliani, with whom Akhmatova later had an affair, succeeded by other extremely close relationships with the likes of the composer Arthur Lourie and Osip Mandelstam. Akhmatova and Gumilyov's relationship was clearly strained from the start, and the two, in a love-hate style, tortured each other until their divorce in 1918. Only after Gumilyov was shot by the Bolsheviks in 1921 did Akhmatova realize how much he had meant to her." "Friend and protector of writers like Pasternak and Mandelstam in the 1920s and 1950s, she was so lionized by her intellectual peers that even when the Bolsheviks turned on her poetry, the authorities feared to harm or kill her. When Mandelstam, for example, was arrested. Akhmatova was in his apartment, and she did everything she could to save him, before he later went mad and died under mysterious circumstances in 1958. Unlike Mandelstam, Pasternak chose to compromise, and wrote an ode to Lenin and translated other poems to Stalin, becoming for a while the government's literary "golden boy"." "While Akhmatova was spared the physical torture of others, her son, Lev, was arrested several times, the authorities believing that she could be tortured through her son's imprisonment. As an artist and mother, she reacted to her trauma by composing a cycle of poems about suffering called Requiem, now regarded as one of the greatest works of the twentieth century, but not published fully in the Soviet Union until 1987. Her other truly great work, Poem Without a Hero, was written from 1940 through 1960, partly during the time that she was expelled from the Writer's Union, a time when friends kept her from starving to death. It was then that she became, through the likes of Isaiah Berlin and others, the most striking symbol to the West of the complete and ruinous breakdown of Communism."--BOOK JACKET.Title Summary field provided by Blackwell North America, Inc. All Rights Reserved… (more)

Remembering Anna Akhmatova by Anatoly Nayman
Anna Akhmatova : a poetic pilgrimage by Amanda Haight
The guest from the future : Anna Akhmatova and Isaiah Berlin by György Dalos
Less Than One: selected essays by Joseph Brodsky
Anna Akhmatova - Selected Poems by Anna Akhmatova
6 more
So Forth: Poems by Joseph Brodsky
Gathering the tribes by Carolyn Forché
Alexander Solzhenitsyn : a century in his life by D. M. Thomas
One art : letters by Elizabeth Bishop
Vladimir Nabokov: The Russian Years by Brian Boyd
Axel's castle : a study in the imaginative literature of 1870-1930 by Edmund Wilson
Fewer