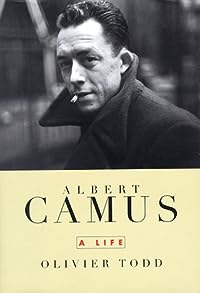 In this enormously engaging, vibrant, and richly researched biography of Albert Camus, the French writer and journalist Olivier Todd has drawn on personal correspondence, notebooks, and public records never before tapped, as well as interviews with Camus's family, friends, fellow workers, writers, mentors, and lovers. Todd shows us a Camus who struggled all his life with irreconcilable conflicts--between his loyalty to family and his passionate nature, between the call to political action and the integrity to his art, between his support of the native Algerians and his identification with the forgotten people, the poor whites. A very private man, Camus could be charming and prickly, sincere and theatrical, genuinely humble, yet full of great ambition. Todd paints a vivid picture of the time and place that shaped Camus--his impoverished childhood in the Algerian city of Belcourt, the sea and the sun and the hot sands that he so loved (he would always feel an exile elsewhere), and the educational system that nurtured him. We see the forces that lured him into communism, and his attraction to the theater and to journalism as outlets for his creativity. The Paris that Camus was inevitably drawn to is one that Todd knows intimately, and he brings alive the war years, the underground activities that Camus was caught up in during the Occupation and the bitter postwar period, as well as the intrigues of the French literati who embraced Camus after his first novel, L'Etranger, was published. Todd is also keenly attuned to the French intellectual climate, and as he takes Camus's measure as a successful novelist, journalist, playwright and director, literary editor, philosopher, he also reveals the temperament in the writer that increasingly isolated him and crippled his reputation in the years before his death and for a long time after. He shows us the solitary man behind the mask--debilitated by continuing bouts of tuberculosis, constantly drawn to irresistible women, and deeply troubled by his political conflicts with the reigning French intellectuals, particularly by the vitriol of his former friend Sartre over the Algerian conflict. Filled with sharp observations and sparkling with telling details, here is a wonderfully human portrait of the Nobel Prize-winning writer, who died at the age of forty-six and who remains one of the most influential literary figures of our time. "From the Hardcover edition."… (more)

LibraryThing member baswood
“Freedom means being able to defend what I don’t agree with, even in a government or a world I approve of. It’s being able to admit your opponent is right.”

“The (Liason group) proposes to
Show More
create communities of men beyond borders, which are united by things other than abstract ties of ideology”

Albert Camus kept working notebooks throughout his life as well as being a pamphleteer and a journalist and was always ready with a maxim or aphorism to convey his message. There is much of his work in the public domain and Olivier Todd’s biography uses this material to such an extent that it almost feels, at times, that Camus is telling his story in his own words. As an attempt to get into the creative mind of Camus; I think it works fairly well, my only issue is that Camus wrote almost exclusively in French and I fear that some of what he has said may have been lost in translation.

Olivier Todd does an excellent job of painting a vivid picture of the life and times of his subject. There are excellent chapters on his early life in Algiers. He was born to a poor working class French family and he made his name in the colony as a novelist, playwright and journalist, not moving to Paris until 1940 when he was 27 years old. He had been diagnosed with tuberculosis as a teenager and his health problems, which plagued him all his life prevented him from doing active service in World War II. During the war years he became editor of Combat a journal sympathetic to the resistance movement. The extent of Camus involvement in the resistance is still not clear: he claimed never to have touched a gun, but typically at the end of the war he involved himself in pleas for mercy for collaborators who came up for trial. In Paris he was a powerful figure in the literary world and his allegiances and then enmity with Sartre and many of the left wing intellectuals is well documented. Camus led a busy life at one time he was editor in chief of Combat, a reader with the publishing firm Gallimard and desperately trying to find time for his own writing, His love life was complicated and he always had the threat of his own and his wife’s ill health to sap his spirits. After his break from the circle of Parisian left wing intellectuals he felt himself to be in exile and when the Algerian war of independence loomed; as a pied-noir he felt himself even more out on a limb when he refused to endorse the FLN (The Arab independence organisation). He made a lecture tour of the USA and accepted the award of the Nobel prize; he was hardly ever out of the public limelight and always it seemed found himself tied up in knots by politics.

Oliver Todd does not lose sight of the fact that it is Camus’s novels, plays, essays and journalism that is his real legacy and does well in describing his working methods, his constant re-writing, his dissatisfaction with much of his output and his contention that hard work and study got him through rather than any innate genius. Todd manages to incorporate in his narrative, reviews and comments on the novels, plays, essays and their impact on the literary world. His narrative helps the reader to get a feel for Camus thoughts and influences and Todd takes time out to explain what Camus meant by the Absurd and how it differed from Existentialism.

Albert Camus always had an eye for the ladies and was a noted seducer of women. His long lasting second marriage to Francine survived his affairs. He comes across as a man of infinite charm, who managed to juggle his women around his working life. His mistresses tended to stay with him, accepting the man for what he was, a marvellous companion with an honesty and sensibility that was tremendously appealing. In fact honesty is a character trait that exudes from these pages. I got the feeling that Camus always tried to be honest with himself and with other people. He cared deeply about humanity and although not a pacifist would not support any group that advocated violence. It was Camus stand against the horrors perpetrated by the Stalinist regime in Russia that alienated him from many of the left wing groupings in Paris.

His enduring human warmth and goodness embarrass some thinkers. The present book is neither an expose nor a hagiography, nor is it a compendium of Camus’s good deeds. Camus could seem brusque or unpleasant, but he was more often understanding and kind. Vulnerable, he was faithful in friendship and love, despite his numerous affairs. He gave an encapsulated view of his emotional beliefs: ‘No great work… has ever been based on hatred and contempt. The true creator always reconciles people through some part of his heart and life’

Todd’s admiration for the man shines through and this is no bad thing for a biographer. I also found myself agreeing with much of what Camus said and thought and so I am eagerly looking forward to reading some Camus over the coming year. This is a very good biography and at just over 400 pages it gives a well rounded portrait of the man and his works. Unhesitatingly recommended for anyone wishing to get to know more about Albert Camus before, or while reading him. My only quibble is, that although Camus is extensively quoted there are no references or notes as to where they originate from. A minor quibble with a biography that I rate as 4.5 stars.
Show Less
3 more
LibraryThing member kidzdoc
Albert Camus: A Life is an uneven biography, which provides very little critical analysis of Camus' writings and philosophy, and overemphasizes his numerous affairs, marital problems, and petty squabbles with Sartre, de Beauvoir and other writers. The best parts of the book are its discussions of
Show More
the creation of L'Etranger and La Peste, but most of the rest of the book was trivial and a chore to read.
Show Less
LibraryThing member jddunn
A solid, fair-minded and enlightening biography of Camus. I could have stood for a little more literary criticism and examination of his place in the culture at large, but otherwise I can’t complain much at all.
LibraryThing member headisdead
Fairly comprehensive biography with some enlightening episodes, but continuously repeats itself, presenting ground already covered as if it were new. Poor writing or bad editing I don't know, but it's awfully annoying!
Fewer

Genet : a biography by Edmund White
Exile and the Kingdom by Albert Camus
The myth of Sisyphus, and other essays by Albert Camus
Camus by Germaine Brée
Marcel Proust by Jean-Yves Tadié
5 more
Sartre : a life by Annie Cohen-Solal
Damned to fame : the life of Samuel Beckett by James Knowlson
The fall by Albert Camus
At the existentialist café : freedom, being, and apricot cocktails with Jean-Paul Sartre, Simone de Beauvoir, Albert Camus, Martin Heidegger, Maurice Merleau-Ponty and others by Sarah Bakewell
The passion of Michel Foucault by James Miller
Fewer