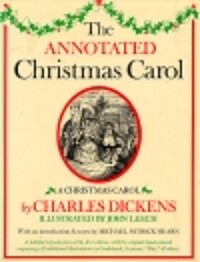 What would Christmas be without A Christmas Carol? Charles Dickens's famous ghost story is as much a part of the season as plum pudding and mistletoe, and Michael Patrick Hearn, the celebrated annotator of The Wizard of Oz and The Adventures of Huckleberry Finn, has prepared this sumptuous, thoroughly annotated edition, which has already become the definitive edition of our century. Initially published by Norton in 2004, this is the first edition to combine the original story with Dickens's Public Reading text, published to coincide with his 1867-68 American tour, which has not been reprinted in nearly a century. Included are rare photographs as well as the original Leech wood engravings and hand-colored etchings, supplemented by other contemporary illustrations by George Cruikshank, Gustave Doré, John Tenniel, and "Phiz." The Annotated Christmas Carol will be a literary feast for the whole family for generations.… (more)

LibraryThing member mmyoung
This review is divided into two sections: the first deals with this reviewer’s assessment of this volume as an annotation while the second assesses the book annotated.

Part One: The Annotated Christmas Carol as a volume of annotation.

Frankly this reviewer was not impressed by the annotating. While some annotations seemed superfluous there were points where comment seemed called for and none was included. The annotator did point out some instances of cant but failed to discuss other points of possible confusion in the text. For example, it is difficult to judge generosity or economy when there is no clear sense of the ‘real world’ or ‘present day’ cost of things. Did Scrooge pay Cratchit more or less than was common for men in that situation? What are we to imagine Scrooge’s nephew did for a living? Was it normal for a clerk not to have actual winter coat or is Cratchit’s need to wear a comforter for warmth common? How unusual was it for someone to have rooms in a building otherwise let out only to offices? Was the Cratchit house of typical size for a family of that number? And was a family of that size typical for a clerk making the wages Cratchit could expect?

While the annotations were not adequate to answering these questions they also did a bad job of contextualizing the ways in which the England of Dicken’s time was changing as the industrial revolution took hold and society became more and more urban.

Part Two: The Christmas Carol - a story by Charles Dickens

The reviewer has always found this story to suffer from fractured logic and distasteful theology. Scrooge is initially visited by the ghost of Marley warning him as to the “after life” consequences of the way Scrooge has chosen to live. Then that aspect of the story is dropped. Scrooge’s visitors do not terrify him with warnings of punishment to come but rather taunt him with memories, loneliness and death. The Spirit of Christmas Past does no more than remind Scrooge of past hopes and disappointments. As Scrooge himself said, a bit of undercooked potato could bring about the same kind of vivid dreams. The Spirit of Christmas Present shows Scrooge all the people who are celebrating Christmas that year. Yet Scrooge knew that people were doing this long before he was visited by this Spirit. Indeed he complained of them doing so since their behaviour wanted thrift on their part and presumed much on the generosity of those who, like him, did not celebrate the season. Indeed the Scrooge, first met by the reader, would have asked what good all the singing, praying and worship was doing these people who would be as cold and hungry the day after Christmas as they were the day before. Would they have not been better off to invest the money spent on the Christmas dinner and used the energy they expended on Christmas celebrations to improve their own circumstances? As for the horror previewed by the Spirit of Christmas Future it was simply that Scrooge would die alone (something he must have long since realized) and that enterprising people would attempt to make money from his corpse and belongings. This reviewer is tempted to believe that the Scrooge met in the opening pages would have actually approved of, if not applauded, the behaviour of these men and women who did not let superstition and convention stand between them and the making of a profit. In sum, Scrooge’s dread realization was that he had once had foolish dreams, that those around him who partook in Christmas were not all repaid with warmth and good food and that he, like all human beings, would die. It is unconvincing that even three nights of dreams that underscored that reality would do much to shake him from the habits, attitudes and beliefs of a lifetime. Scrooge is not convincingly motivated by fear of the afterlife: he is, apparently, suddenly visited with the emotions that Charles Dickens imagined he would feel were he in Scrooge’s circumstances. Since someone who felt about the world as did Dickens would not have made the choices Scrooge made in the first place this realization is actually a tautology.

The denouement of Scrooge’s bad night with the ghosts does not make this reader feel that Scrooge was a man reformed but rather that Scrooge was a man who had been brainwashed. If the Scrooge of the next morning was shown to struggle with his newfound understandings of the implications of his actions then it might possibly have been uplifting for this reader. How can one applaud the generosity of a man who no longer struggles with the demons of avarice? How can one applaud the open-handedness of a rich man who has suddenly realized that he may die alone and that a small investment in those around him will guarantee care and attention in his old age? To praise Scrooge’s behaviour is like praising someone on Prozac for no longer acting depressed.

It did neither.… (more)
3 more
LibraryThing member Stbalbach
The classic Christmas story first written in 1843 when Dickens was still early in his career it was an instant success that allowed him to break out of debt. A richly detailed short story that requires annotations to fully appreciate the mid-19th century terms and venacular. It can be read over multiple times without tireing in its densely woven and richly described atmosphere. I plan to read it again next Christmas. The Norton Annotated is so well done it is hard to imagine anything better, a great piece of artwork in its own right.… (more)
LibraryThing member nymith
My version of this timeless classic is Annotated, which I would certainly recommend as the ideal binding. There are a surprising number of "slang" terms of the time, and the footnotes can come in handy, I felt.

I won't summarise the story, since everyone ought to know it by now. But even if you know everything, and sneer at Tiny Tim as sentimental and the character transformation of Scrooge as implausible, I really would advise you to read the story before you condemn it. I was quite surprised by its enjoyability.

One doesn't think of Dickens and fantasy as going together, does one? But this story proves he had a fine, vivid imagination in that direction, and hence the supernatural is effortlessly crafted. Imagery for Marley and the Three Spirits is sublime, each one seeming to outdo the last.

The other key set of descriptions in this story is that of Dickens' London. A superb creation. The imagery of Christmas is beautifully evoked, what with mouth-watering descriptions of a streetmarket and economically elegant passages devoted to bleak coastal celebrations...

The prose isn't perfect, of course. Each chapter bulges with at least a few overactive details, and sometimes the wording is garbled and in need of editing. And in terms of plot and character, Dickens' famed sentimentality does intrude from time to time - such as in the character of Belle (the Angel of the House) and during the Fezziwig ball scene.

Yet what does it matter? Despite these flaws, A Christmas Carol is marvelous. To begin with Scrooge and see it all happen with him, is in a way, to take part in that redemption as well. I found his transformation entirely plausible, and by the time I reached the final act, I shared his joy entirely. Happiness radiated from the pages, and I finally understood why this is considered such a timeless part of the Christmas tradition.… (more)
LibraryThing member VirginiaGill
I actually love Dickens and this story in particular. However, I did not enjoy this edition of the book. Picked it up thinking it would give me lots of interesting info for our book group discussion. Mostly just found it annoying. Skip all the notes, or read them at a separate sitting from the story itself and you will enjoy it far more.… (more)
Fewer