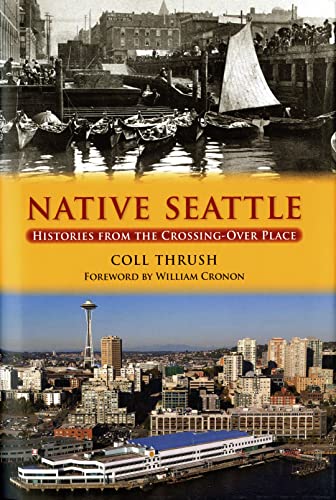 Winner of the 2008 Washington State Book Award for History/Biography In traditional scholarship, Native Americans have been conspicuously absent from urban history. Indians appear at the time of contact, are involved in fighting or treaties, and then seem to vanish, usually onto reservations. In Native Seattle, Coll Thrush explodes the commonly accepted notion that Indians and cities-and thus Indian and urban histories-are mutually exclusive, that Indians and cities cannot coexist, and that one must necessarily be eclipsed by the other. Native people and places played a vital part in the founding of Seattle and in what the city is today, just as urban changes transformed what it meant to be Native. On the urban indigenous frontier of the 1850s, 1860s, and 1870s, Indians were central to town life. Native Americans literally made Seattle possible through their labor and their participation, even as they were made scapegoats for urban disorder. As late as 1880, Seattle was still very much a Native place. Between the 1880s and the 1930s, however, Seattle's urban and Indian histories were transformed as the town turned into a metropolis. Massive changes in the urban environment dramatically affected indigenous people's abilities to survive in traditional places. The movement of Native people and their material culture to Seattle from all across the region inspired new identities both for the migrants and for the city itself. As boosters, historians, and pioneers tried to explain Seattle's historical trajectory, they told stories about Indians: as hostile enemies, as exotic Others, and as noble symbols of a vanished wilderness. But by the beginning of World War II, a new multitribal urban Native community had begun to take shape in Seattle, even as it was overshadowed by the city's appropriation of Indian images to understand and sell itself. After World War II, more changes in the city, combined with the agency of Native people, led to a new visibility and authority for Indians in Seattle. The descendants of Seattle's indigenous peoples capitalized on broader historical revisionism to claim new authority over urban places and narratives. At the beginning of the twenty-first century, Native people have returned to the center of civic life, not as contrived symbols of a whitewashed past but on their own terms. In Seattle, the strands of urban and Indian history have always been intertwined. Including an atlas of indigenous Seattle created with linguist Nile Thompson, Native Seattle is a new kind of urban Indian history, a book with implications that reach far beyond the region. Replaced by ISBN 9780295741345… (more)

First of all, it is very clear that this was written as graduate student work. I'm a graduate student in history myself, so that isn't a criticism. But it does mean that it is geared more towards professors and towards certain academic goals than towards a popular audience. As a Seattle resident with only a vague idea of Seattle's history, I was hoping for something designed for a popular audience. The book tends to assume that you know the major stories of Seattle's history, such as the Denny Party landing, the importance of the AYP Exhibitions, the Indian "attack" on Fort Lawton. It assumes that you know who all of the big names in Seattle history are. Most frustratingly, there is a lot of discussion of Chief Seattle's famous speech, with some reference to the fact that Seattle probable didn't say most of what is in the speech as we know it, but there was absolutely no discussion of what parts of the speech came from him, and only a few lines of the speech are quoted in the book. Since I'm not well-versed in Seattle history, it was really hard for me to see how this native history is distinct from Seattle's master narrative, and I was often confused about the events Thrush was discussing. So don't pick this up expecting it to be a good book to learn Seattle's history. It's a good book to supplement your knowledge, but assumes that you already know Seattle's history pretty well.

The introduction discusses at great length how most people think that Indian history and urban history are mutually exclusive: that is, Indians exist in the wilderness, then white people come in and build cities and push Indians out. Thrush claims that the book will debunk this myth and show that Indians do have an urban history. He also claims that he will use evidence from Native Americans and let their voices tell this Indian urban history. The book doesn't do these things at all. Actually, it is very much a story of marginalization, imperialism, and appropriation of native imagery by whites. The book does talk about some Indians who live in Seattle, but the vast majority of the evidence is anecdotal, and mostly seems to reinforce the master narrative. The Indians he does describe in Seattle have lowly service jobs, or live on the notorious Skid Road (although he assumes that you know why Skid Road is notorious, and does very little to describe it).

Really, instead of an Indian urban history, this is a history of white attitudes to Indians and white appropriation of Indian traditions, art, and imagery for their own political and imperialist needs. I did not feel that Indians had a voice in this book at all, and other than a few place-names, I learned basically nothing about Indian culture.

The anecdotal nature of the evidence was especially distressing. Nowhere are there any statistics about numbers of Indians living in Seattle, or where they lived, or what their economic status has been. Thrush will make some statement along the lines of "Lots of Indians lived south of downtown and worked in local businesses," and then he'll name two Indians and where they worked. Or he'll say that Indian memories of certain places remained intact for generations, and then he'll quote one sentence from an oral history interview of one Indian. I feel like Thrush is trying to investigate Indian history, but the only tools he has at his disposal are the tools we use to study white history - government records, newspapers, and documents. Even the nature of the evidence could have become an interesting discussion, but Thrush never discusses it.

Wow, this review has turned out to be a lot more scathing than I meant it to be. Some of my negativity is because I was hoping this would be more of a general history, and I wasn't expecting the book to have prerequisites. But the book also has some pretty big flaws as a work of history.… (more)
1 more
LibraryThing member eldang
A beautiful book that powerfully illustrates its key claim: that the Native history of Seattle may be dramatically changed and challenged, but it's neither past nor complete. A few things I particularly appreciated:

* The vivid description of the multi-ethnic Seattle of the early pioneer days. It made me wish that hadn't been wiped out, and wonder what kind of hybrid culture could have emerged in a Seattle or a Vancouver that had allowed it to keep flourishing.
* A clear sense of how the contemporary Tribes of the region relate to ancestral and language groups.
* A much clearer portrayal than I've seen elsewhere of who "Chief" Seattle really was and why he commanded so much respect and attention.
* Many mentions of individuals and families who weren't necessarily individually notable. A lot of them are very brief sketches, but they still mean much more than just saying "we know there were Shilsholes and Muckleshoots working at this mill", etc.
* The powerful sense of continuity of Native Seattle even among all the hardship and forced change.
* The atlas section at the end that brings the immediate pre-Settler period to life though its list of place names and explanations of their significance.

That atlas was what I thought the whole book would be, but it's actually much more interesting in the context of all the stories that precede it.… (more)
Fewer

inscribed to David Brewster by author

Emerald City : An environmental history of Seattle by Matthew Klingle
Puget's Sound : a narrative of early Tacoma and the southern Sound by Murray Cromwell Morgan
The Forging of a Black Community: Seattle's Central District from 1870 through the Civil Rights Era (Emil and Kathleen Sick Book Series in Western History and Biography) by Quintard Taylor
Answering Chief Seattle by Albert Furtwangler
Alaska-Yukon-Pacific Exposition : Washington's first world's fair : a timeline history by Alan J. Stein
21 more
Skid road : an informal portrait of Seattle by Murray Cromwell Morgan
The American Northwest: A History of Oregon and Washington by Gordon B. Dodds
Chief Seattle and the Town That Took His Name: The Change of Worlds for the Native People and Settlers on Puget Sound by David M. Buerge
Seattle and the Demons of Ambition: From Boom to Bust in the Number One City of the Future by Fred Moody
The Good Rain: Across Time and Terrain in the Pacific Northwest by Timothy Egan
Vanishing Seattle (Images of America) by Clark Humphrey
The Natural History of Puget Sound Country by Arthur R. Kruckeberg
Seattle, past to present by Roger Sale
Seattle geographies by Michael Brown
The Canoe and the Saddle; or, Klalam and Klickatat by Theodore Winthrop
Utopias on Puget Sound : 1885-1915 by Charles Pierce LeWarne
Washington Territory by Robert E. Ficken
Island in the sound by Hazel Heckman
On American Soil : How Justice Became a Casualty of World War II by Jack Hamann
To Serve the Greatest Number : A History of Group Health Cooperative of Puget Sound by Walt Crowley
Exploring Washington's past : a road guide to history by Ruth Kirk
Digressions of a Native Son by Emmett Watson
The Seattle bungalow : people and houses, 1900-1940 by Janet Ore
Seattle, now & then by Paul Dorpat
Short nights of the Shadow Catcher : the epic life and immortal photographs of Edward Curtis by Timothy Egan
Island Year by Hazel Heckman
Fewer