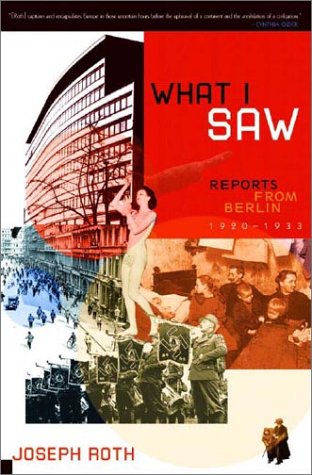 The Joseph Roth revival has finally gone mainstream with the thunderous reception for What I Saw, a book that has become a classic with five hardcover printings. Glowingly reviewed, What I Saw introduces a new generation to the genius of this tortured author with its "nonstop brilliance, irresistible charm and continuing relevance" (Jeffrey Eugenides, New York Times Book Review). As if anticipating Christopher Isherwood, the book re-creates the tragicomic world of 1920s Berlin as seen by its greatest journalistic eyewitness. In 1920, Joseph Roth, the most renowned German correspondent of his age, arrived in Berlin, the capital of the Weimar Republic. He produced a series of impressionistic and political essays that influenced an entire generation of writers, including Thomas Mann and the young Christopher Isherwood. Translated and collected here for the first time, these pieces record the violent social and political paroxysms that constantly threatened to undo the fragile democracy that was the Weimar Republic. Roth, like no other German writer of his time, ventured beyond Berlin's official veneer to the heart of the city, chronicling the lives of its forgotten inhabitants: the war cripples, the Jewish immigrants from the Pale, the criminals, the bathhouse denizens, and the nameless dead who filled the morgues. Warning early on of the dangers posed by the Nazis, Roth evoked a landscape of moral bankruptcy and debauched beauty--a memorable portrait of a city and a time of commingled hope and chaos. What I Saw, like no other existing work, records the violent social and political paroxysms that compromised and ultimately destroyed the precarious democracy that was the Weimar Republic.… (more)

LibraryThing member jwhenderson
This is the wonderful selection of essays by Joseph Roth collected as What I Saw: Reports from Berlin 1920-1933. In this selection of "reports" by the novelist and journalist Joseph Roth, best known for his masterpiece The Radetzky March, we are presented with a picture of the Weimar Republic through the eyes of one of the finest writers of the twentieth century. Roth was a young foreign correspondent for various newspapers, only twenty-six years old, when the earliest of these pieces was written. During the period he would also write some of the novels that have brought him posthumous fame.

The reports in this selection chronicle the underside of Berlin including Jewish immigrants, criminals and others. There are 34 pieces organized by topics such as Displaced Persons, Bourgeoisie and Bohemians, Berlin's Pleasure Industry and Look Back in Anger. In the essay "The Kurfurstendamm" he writes, "In the evening I walk along the Kurferstendamm. I slink along the walls like a dog. I am on my own, but I have a certain sense that destiny has me on a leash. . . . And so the Kurfurstendamm stretches out endlessly day and night. Also, it's being renovated. These two facts need to be emphasized, because of the way it's continually ceding particles of its true self to its designated cultural-historical role."

It is the essay of the last section, "The Auto-da-Fe of the Mind" that resonates in my memory looking back on my reading of this book. Let me quote:
"Let me say it loud and clear: The European mind is capitulating. It is capitulating out of weakness, out of sloth, out of apathy, out of lack of imagination . . . Now, as the smoke of our burned books rises into the sky, we German writers of Jewish descent must acknowledge above all that we have been defeated."

The essays in this book ring loud and clear over the decades and they bring home to the twenty-first century a sense of the life and decay of the era witnessed by Joseph Roth.… (more)
4 more
LibraryThing member dougwood57
Joseph Roth is best-known today as the author of the The Radetzky March (Works of Joseph Roth), but his day job was as a journalist. This book is a collection of columns he wrote as he observed daily life in Berlin. (The correct term for them is "feuilleton").

The titles of the book's parts give a good indication of Roth's topics in the 34 selections published here for the first time in English; for example, the Jewish Quarter, Displaced Persons, Bourgeoisie and Bohemians, and Berlin's Pleasure Industry. While Roth mentions Hitler, Goebbels, and the Nazis occasionally, only the final chapter, Auto-da-Fe of the Mind, is devoted entirely to the subject.

One thing I should make clear, Roth's book is NOT an exploration of the growing power of the Nazis. Given that Berliners came late to Nazism, this is perhaps not that surprising, but it came as a disappointment to me. (The subtitle's reference to 1920-1933 is a bit misleading. Only the final chapter was written in 1933 and the latest prior publication date for any other chapter was 1929.)

Roth did not much like Berlin and his descriptions provide a counterbalance to the numerous views of Berlin's heyday in the 1920's. The book is indispensable to anyone with a great interest in Berlin, especially in the inter-war period, but otherwise of limited interest to most readers - unless you just enjoy a good and well-written feuilleton without regard to the subject matter.… (more)
LibraryThing member CarltonC
Over a couple of months I have read this uneven collection of newspaper articles by Joseph Roth, famous to me as the author of The Radetsky March. The articles are mainly from the Frankfurter Zeitung about Berlin in the 1920's. These are not political, but more about everyday events or, better, random musings.
The book starts with some articles about Jews - refugees from the East (Poland, Hungary and many from Russian POW camps following WWI) and their area in Berlin, including an article about a model miniature rebuilding of the Temple of Solomon.
There are then a series of articles on various locations or events in Berlin that have caught Roth's attention - night dives (cafes etc), the homeless refugees, the steam baths, the police morgue, the traffic system, new buildings and the pleasure industry.
These sometimes soar, such as the article on skyscrapers:
"It is impossible for the proximity of clouds to have no effect on human beings. The view out of the window, taking in the full boundlessness of the horizon, works on both heart and soul. The lungs take in the air of heaven. Clouds wander past the brows of mortal man as previously only around the brows of Olympians."
and
"Oh— and already you hear that the first skyscraper in Berlin is to contain a great entertainment palace, with cinemas, dance hall, bar, Negro bands, vaudeville, jazz. Because human nature will not deny its weaknesses, even where it is seemingly in the process of overcoming them. And if it were possible for us to build a “planet scraper” and to construct settlements on Mars, the expeditions of scientists and engineers would be accompanied by a delegation of bartenders. I have a shining vision of a bar in the clouds. It’s raining champagne cocktails."
Sometimes the effect is far more prosaic, but still enlightening of a different time.

The final, longer essay written in 1933 and published in Paris after Roth's "voluntary" exile when the Nazis came to power is about the Nazi rise to power. This is a powerful essay and although it is easy to be clever with hindsight, this was wise at the time. The article opens:
"Very few observers anywhere in the world seem to have understood what the Third Reich’s burning of books, the expulsion of Jewish writers, and all its other crazy assaults on the intellect actually mean. The technical apotheosis of the barbarians, the terrible march of the mechanized orangutans, armed with hand grenades, poison gas, ammonia, and nitroglycerine, with gas masks and airplanes, the return of the spiritual (if not the actual) descendants of the Cimbri and Teutoni— all this means far more than the threatened and terrorized world seems to realize: It must be understood. Let me say it loud and clear: The European mind is capitulating. It is capitulating out of weakness, out of sloth, out of apathy, out of lack of imagination (it will be the task of some future generation to establish the reasons for this disgraceful capitulation)."

Overall it is a powerful collection and, through the overall impression of the times it portrays, is more than the sum of its uneven parts.… (more)
LibraryThing member pamelad
A collection of Roth's journalism, published in Berlin in the twenties. The last article, written in Paris in 1933, tells the world of the fate of Jewish writers in Nazi Germany.

Roth gathers impressions as he wanders the streets of Berlin, in and out of cafes, and nightclubs, the Riechstag and a shelter for the homeless. He writes with wit and passion. A brilliant record of Berlin during the Weimar Republic.… (more)
LibraryThing member mjlivi
A fascinating portrait of Berlin between the wars. Witty and ironic snapshots of city life, politics and the arts all lent a hint of sadness by the foreshadowing of what is to come.
Fewer