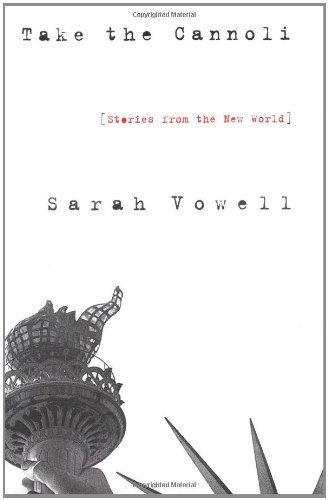 Take the Cannoli : Stories from the New World

A wickedly funny collection of personal essays from popular NPR personality Sarah Vowell. Hailed by Newsweek as a "cranky stylist with talent to burn," Vowell has an irresistible voice -- caustic and sympathetic, insightful and double-edged -- that has attracted a loyal following for her magazine writing and radio monologues on This American Life. While tackling subjects such as identity, politics, religion, art, and history, these autobiographical tales are written with a biting humor, placing Vowell solidly in the tradition of Mark Twain and Dorothy Parker. Vowell searches the streets of Hoboken for traces of the town's favorite son, Frank Sinatra. She goes under cover of heavy makeup in an investigation of goth culture, blasts cannonballs into a hillside on a father-daughter outing, and maps her family's haunted history on a road trip down the Trail of Tears. Take the Cannoli is an eclectic tour of the New World, a collection of alternately hilarious and heartbreaking essays and autobiographical yarns.… (more)

The A. V. Club
From her gun-making father to her obsession with The Godfather, Disney World, The Chelsea Hotel, and Goths, Take The Cannoli is full of personal anecdotes that rarely try to insert themselves into the pop-culture continuum. Instead, they're part of the pop-culture continuum, like mental snapshots taken on a tour of the country. Vowell understands that even the world's most mundane elements can be and often are interesting, making Take The Cannoli a surprisingly successful assessment of American life free from the trappings of grandiosity.

LibraryThing member goldiebear
I desperately want to like Sarah Vowell. This is the second book I have attempted to read by her and it's just not working. I have never been a big short story fan and this book didn't help. She tries too hard to be funny and in the end it's just annoying. I keep hoping that I am going to find something amusing, but I don't. I don't care about her family or her weird quirks. Somehow her writing just doesn’t help me to care. I don't know why. Usually I dig stuff like this. I made it about 3/4 of the way through this book and was done. I didn't even finish. I was bored and I felt like I was just wasting time.....… (more)
16 more
LibraryThing member eduscapes
I've enjoyed listening to the essays of Sarah Vowell on public radio, so I wasn't sure if reading her books would be the same experience. However as I read the book, I could almost hear her trademark nasal voice reading to me aloud. I'm not a particularly cynical person, but there's something about the way that Vowell views the world that I find hilarious!… (more)
LibraryThing member seidchen
I've enjoyed listening to Sarah Vowell's stories on "This American Life," so this book caught my eye from the library shelf. As a light summer read, it did not disappoint. I enjoyed these wry travelogues, musings on guns, insomnia, mix tapes, and various visions of the apocalypse, and also the romps through Disney World and the Chelsea Hotel.

Unlike David Sedaris, who made it big on NPR with a similar brand of intellectual, self-deprecating humor, Sarah Vowel writes stories that wrap her quirky childhood and more recent experiences in an informed perspective on American history. She has an astute eye for detail and an ear for a quick and comic turn of phrase. Her diction is distinctive, a finely tuned mix of high and low. As she says in the story "The End is Near, Nearer, Nearest," she has "a passion for unlikely words."

Having previously heard her read "Music Lessons" from this collection on the radio, though, I found I couldn't get her (likewise distinctive) voice out of my head. Vowell writes in a style better suited to speech, punctuating for dramatic pauses. While it's fun to listen to her stories read aloud, the book suffers from this stage-direction-like approach.… (more)
LibraryThing member trinityofone
Reading Sarah Vowell always inspires in me the same reaction as watching/listening to a really cool kid did in high school (or, okay, now): I desperately want to *hang* with her. (Especially because she's also friends with fellow essayist David Rakoff, whom I adore; one of the pieces in this collection is about the two of them going to DisneyWorld, and I had resist the temptation to leap up from my couch, waving my hand and crying: 'Ooh, take me! Take me, too!') In these essays about growing up/living in America and trying to make sense of American history and culture, Vowell captures the spirit and soul of (this often impossibly fucked up) country in a way that's remarkably close to the way I see it—remarkable, among other reasons, because Vowell's experiences are mostly based around living in Oklahoma, Montana, and Chicago, and mine around Vermont and California. It's nice to think that there are still some aspects of American life that can be seen as inclusive, red state or blue, and though Vowell (quite rightly) doesn't gloss over any of the nation's nastier aspects, she treats all her subjects with respect and humor—qualities we could certainly use more of.… (more)
LibraryThing member dickcraig
I didn't like this much as Vowell's other book. It was a quick read.
LibraryThing member swampette
What a truly delightful book! I so thoroughly enjoyed Sarah Vowell's essay in State by State that I decided to check out one of her books. I devoured it in less than 24 hours! Her writing voice - like her speaking voice - is distinct and quirky, though caustic enough that I wouldn't want to read all her books consecutively. But I do look forward to adding them to my reading list sporadically.… (more)
LibraryThing member aiyume
A selection of essays by Sarah Vowell mostly from NPR's This American Life, these give a glimpse into Sarah's life and into the heart of America itself. From the Trail of Tears to mix tapes and goth culture, this book inspires a geek crush in me that makes me want to read and hear more.
LibraryThing member vnovak
Humorous essays from NPR's "This American Life" commentator Sarah Vowell. The best pieces are hilariously funny and touching, while others are strident and obsessive. My favorites are about insomnia, a goth makeover, rock 'n' roll fantasy camp, learning to drive, making custom music tapes, and the high school band experience.
LibraryThing member rosencrantz79
Perhaps because I've listened to my Assassination Vacation audiobook four or five times, or maybe because she has an extremely distinctive voice, but when I read Sarah Vowell's essays, I can actually hear her speaking in my head. It's like listening to my own personal This American Life episode! I like the depth and scope Vowell achieved in Vacation and found myself wishing that she had a little more room to explore some of the ideas and themes she writes about in Cannoli, but this is a nice collection overall.… (more)
LibraryThing member jennyo
Sarah Vowell is one of my favorite essayists. I love the way she combines history, politics, and geekiness into such a funny and informative package. I'm sort of tired tonight, so I'm taking the lazy way out and simply including some of my favorite quotes from the book as a review.

From The End is Near, Nearer, Nearest

Heaven, such as it is, is right here on earth. Behold: my revelation: I stand at the door in the morning, and lo, there is a newspaper, in sight like unto an emerald. And holy, holy, holy is the coffee, which was, and is, and is to come. And hark, I hear the voice of an angel round about the radio, saying, "Since my baby left me I found a new place to dwell." And lo, after this I beheld a great multitude, which no man could number, of shoes. And after these things I will hasten unto a taxicab and to a theater, where a ticket will be given unto me, and lo, it will be a matinee, and a film that doeth great wonders. And when it is finished, the heavens will open, and out will cometh a rain fragrant as myrrh, and yea, I have an umbrella.

And once again it's striking how the two American tendencies exist side by side--to remember our past, and to completely ignore it and have fun. Look at how we treat all our national holidays. Don't we mourn the dead on Memorial Day with volleyball and sunscreen? Don't We the People commemorate the Fourth of July by setting meat and bottle rockets on fire? Which makes a lot of sense when you remember that a phrase as weird and whimsical as "the pursuit of happiness" sits right there--in the second sentence of the founding document of the country.

And from the same essay:

When I think about my relationship with America, I feel like a battered wife: Yeah, he knocks me around a lot, but boy, he sure can dance.… (more)
LibraryThing member amelish
The first (?) essay about her dad made me cry for no reason. I don't particularly like her style of writing though. I expected it to be wordy and wicked and hilarious, but it seems a little...simplified? Tame? Obviously she's really smart, but it's as if she's writing essays expressly to be read on oh, "This American Life" or something. Wait...… (more)
LibraryThing member Djupstrom
Smart, funny, and interesting. And I am not just talking about the the author Sarah Vowell. Taking the Canolli is a nice change of pace.
LibraryThing member Unreachableshelf
An engaging collection of essays on various topics of Americana. Vowell is a fun author to spend some time with.
LibraryThing member rcooper3589
wonderful! makes you really think!!
LibraryThing member gbelik
An enjoyable collection of essays by Sarah Vowell. I love to listen to her books, but I couldn't find this one as an audio book so I read it. I can hear her voice while reading it too.
LibraryThing member bragan
A collection of personal essays, most of which originally appeared as radio segments on This American Life, in which Sarah Vowell, among other things, fires a canon with her gunsmith father, traces her Cherokee ancestors' path along the Trail of Tears, reflects on a childhood spent waiting for the Apocalypse, fails to get into the spirit of rock 'n' roll fantasy camp, and compulsively rewatches The Godfather.

I didn't find this quite as consistently engaging as Assassination Vacation or The Wordy Shipmates -- I think I may just like Vowell better when she's writing at greater length -- but it's still full of offbeat charm, often very funny, and occasionally insightful.… (more)
LibraryThing member readingrebecca
I enjoyed these essays enormously, but really loved Dark Circles, Sarah Vowell's essay about insomnia. Suffering from the same malady, I SO identified with her. I've tried all those "cures" she mentioned and with much the same results. And when she talked about going a day without caffeine, well I had to pick myself up off the floor!… (more)
Fewer