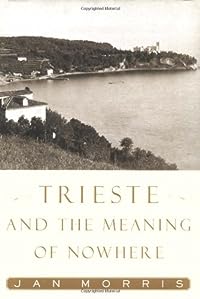 Trieste and the meaning of nowhere

Jan Morris (then James) first visited Trieste as a soldier at the end of the Second World War. Since then, the city has come to represent her own life, with all its hopes, disillusionments, loves and memories. Here, her thoughts on a host of subjects - ships, cities, cats, sex, nationalism, Jewishness, civility and kindness - are inspired by the presence of Trieste, and recorded in or between the lines of this book.' Evoking the whole of its modern history, from its explosive growth to wealth and fame under the Habsburgs, through the years of Fascist rule to the miserable years of the Cold War, when rivalries among the great powers prevented its creation as a free city under United Nations auspices, Trieste and the Meaning of Nowhere is neither a history nor a travel book; like the place, it is one of a kind. Jan Morris's collection of travel writing and reportage spans over five decades and includes such titles as Venice, Coronation Everest, Hong Kong, Spain, Manhattan '45, A Writer's World and the Pax Britannica Trilogy. Hav, her novel, was shortlisted for the Booker Prize and the Arthur C. Clarke Award.… (more)

Slovene Studies
I am reminded of what Nabokov said about admirers of smooth but bad translations “...the hack who has never read the original and does not know its language praises an imitation as readable because easy platitudes have replaced in it the intricacies of which he is unaware..” This book is a
Show More
bad translation, a poetization of Trieste. And the fawning commentators praise it because they know even less about the original.
Show Less

LibraryThing member wandering_star
From the very first paragraph, you know this isn't going to be your standard travel book. How many travel writers would dare to start a book about a city like this: "I cannot always see Trieste in my mind's eye. Who can? It is not one of your iconic cities, instantly visible in the memory or the
Show More
imagination. It offers no unforgettable landmark, no universally familiar melody, no unmistakable cuisine, hardly a single native name that everyone knows. It is a middle-size, essentially middle-aged Italian seaport, ethnically ambivalent, historically confused, only intermittently prosperous, tucked away at the top right-hand corner of the Adriatic Sea, and so lacking the customary characteristics of Italy that in 1999 some 70 percent of Italians, so a poll claimed to discover, did not know it was in Italy at all."

This book can start like this because it's at least as much about travelling in time as in space. Trieste had a period of glory and importance in the eighteenth and early nineteenth centuries, when it was the seaport for the Austro-Hungarian Empire - but as wars broke out, borders shifted and new countries were born, it lost its role and fell into a decline. So the story of Trieste is about "age, doubt and disillusion ... lost consequence and faded power". It also, in many ways, is a reflection on Jan Morris' own life - she first visited the city immediately after WW2, and has been a regular visitor ever since.

The book is undoubtedly melancholy, yet it's also uplifting. There are extended flights of imagination to the city in its prime: "All around me first-class passengers, awaiting the time to board their ship, are enjoying their last half-hour on Austrian soil before sailing away to America, Alexandria or the East. There they sit at their tables in the sunshine, with their parasols and their ebony walking-sticks, greeting old acquaintances or introducing one another to fellow-passengers." The book as a whole is a song of praise to a certain state of mind, sympathetic, honest and courteous, which Morris claims to have found in this city more than any other.

Ultimately, "Trieste and the Meaning of Nowhere" is deeply imbued with an understanding of the historical dynamics which have created the city - and makes you wander what the point is of going anywhere without that sort of understanding. It's also beautifully written, and a book that leaves you with ideas fizzing round your head, from Morris' musings on the nature of nationalism or of exile, to her throwaway lines like "ports are more vulnerable than most cities to the vagaries of history".
Show Less
5 more
LibraryThing member bhowell
This is the last book by a brilliant British historian who has written at least 30 history books mostly on British and European history. She simply is beyond compare other than in my mind perhaps Christopher Hibbert. Indeed I have found that I am missing some of my favourites because my son, a
Show More
graduate student in history has gradually been taking them. They really are that good.
Show Less
LibraryThing member thorold
At first glance, Trieste seems an unlikely subject for a travel book, especially for one billed as the last book by a distinguished writer. It's a place you're probably more likely to visit for business than for pleasure, and it is also famously a city that most people have trouble finding on the
Show More
map (as Morris concedes, even Italians don't always know which country Trieste belongs to). Even if we do know anything about Trieste, that knowledge tends to be contradictory and improbable: it was the chief seaport of Austria, but we're pretty sure it's not in Austria, and moreover, Austria is famously landlocked; it was the place where the emperor Maximilian lived, but it's certainly not in Mexico; the writer most famously associated with it is James Joyce, but there is only one city we can ever associate with Joyce, and that's at the other end of Europe. We do know it was the place where Winckelmann was murdered by a boy he had picked up, but we now have only the vaguest idea who Winckelmann was. And so on.

Morris has a lot of fun exploring this kind of oddity, but of course there's more to it than that. It turns out that Trieste was the place where she (then still "he") was stationed as a young army officer at the end of World War II, and she's evidently kept in close touch with the place over the intervening half-century. This gives the opportunity for some very interesting insights into the way the city reflects - or doesn't - the ways that Europe has changed over the years. One important theme that keeps coming back is exile: how Trieste's peculiarly central and yet non-central situation, perpetually on the fringes of European spatial awareness, has allowed it to act as a shelter for people and ideas that don't really fit in with its ostensibly businesslike, commercial atmosphere.

This probably isn't a book that will produce a profound shift in your way of looking at the world, and (like all really good travel books) it would be of little practical use as a guide for the visitor. But it is definitely a book that will give you the feeling that you ought to visit the place it describes (and the sense that in a way, you already have); it is a book that will leave you reflecting that the world can't be altogether a bad place if it is capable of inspiring such wonderful writing; and it will probably also leave you with the hope that Morris, despite assurances to the contrary, might have one or two more unpublished books tucked away somewhere still...
Show Less
LibraryThing member oparaxenos
Good, but not great

I have always been fascinated by Trieste, and was looking forward to reading Jan Morris' impressions of the city. Unfortunately, I found the book a rather rambling discourse about life and European history in general, rather than about Trieste and its place in the world.
LibraryThing member soylentgreen23
This is, really, the biography of a city, less a piece of travel writing and more an examination of what it means to be a place and not 'in' a place. Except, it's that too - Jan Morris manages the balance between what the city represents through its history on the one hand, and what the city and
Show More
its inhabitants (both guests and residents) experienced on the other, with aplomb; the result is a book that is never dull, and that is loaded with fascinating details.
Show Less
LibraryThing member LynnB
I found that this book lacked a narrative...there was no frame that allowed me to see where the author was going. It was a sad book -- Trieste is in decline and the author is reaching old age and believes this will be her last book. (She wrote seven more).

My favourite part was the description of
Show More
the old ladies in Draguc all coming to help a traveller find the key to the church. That is one of the few parts that were animated with people.

This book didn't make me fall in love with Trieste as I fell in love with Venice and Savannah after read City of Falling Angels and Midnight in the Garden of Good and Evil by John Berendt.
Show Less
Fewer

Black lamb and grey falcon : a journey through Yugoslavia by Rebecca West
A Time of Gifts: On Foot to Constantinople: From the Hook of Holland to the Middle Danube (New York Review Books Classics) by Patrick Leigh Fermor
Between the Woods and the Water: On Foot to Constantinople: From The Middle Danube to the Iron Gates (New York Review Books Classics) by Patrick Leigh Fermor
The Lost Continent: Travels in Small-Town America by Bill Bryson
The Pillars of Hercules: A Grand Tour of the Mediterranean by Paul Theroux
9 more
The World : Travels 1950-2000 by Jan Morris
The broken road : from the Iron Gates to Mount Athos by Patrick Leigh Fermor
Midnight in Sicily: on art, food, history, travel and La Cosa Nostra by Peter Robb
Mediterranean Winter: The Pleasures of History and Landscape in Tunisia, Sicily, Dalmatia, and the Peloponnese by Robert D. Kaplan
Barcelona by Robert Hughes
The Travels of Marco Polo the Venetian by Marco Polo
Venetian Life. Two volumes by William Dean Howells
Istanbul : memories and the city by Orhan Pamuk
What am I doing here by Bruce Chatwin
Fewer