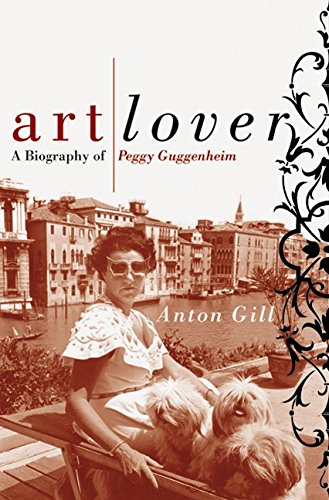 "Peggy Guggenheim's tempestuous life (1898-1979) spanned the most exciting and volatile years of the twentieth century, and she lived it to the full. How she became one of the century's foremost collectors of modern art - and one of its most formidable lovers - is the subject of this biography." "Her father, Benjamin Guggenheim, went down with the Titanic en route home from installing the elevator machinery in the Eiffel Tower, and it was in Paris in the 1930s that the young heiress came into a small fortune and began to make her mark in the art world. Uneasily married to the alcoholic English dilettante writer Laurence Vail, she joined the American expatriate bohemian set. Though her many lovers included such lions of the worlds of art and literature as Samuel Beckett, Max Ernst (whom she later married), Yves Tanguy, and Roland Penrose, real love always seemed to elude her." "In the later 1930s, Peggy set up one of the first galleries of modern art in London, quickly acquiring a magnificent selection of works by Picasso (who snubbed her), Magritte, Miro, and Brancusi, and buying great numbers of paintings from artists fleeing to America after the Nazi invasion of France. Escaping from Vichy, she moved back to New York, where she was hugely influential in assisting the beginnings of the new American abstract expressionist movement (in particular, Jackson Pollock)." "Researched, filled with colorful incident, and boasting a distinguished cast, Anton Gill's biography reveals the inner drives of a remarkable woman and indefatigable patron of the arts."--BOOK JACKET.… (more)

The Devil and Dr. Barnes: Portrait of an American Art Collector by Howard Greenfeld
Duveen by S. N. Behrman
The Girl with the Gallery by Lindsay Pollock
M : the man who became Caravaggio by Peter Robb
Them : a memoir of parents by Francine du Plessix Gray
2 more
About the New Yorker and me : a sentimental journal by E. J. Kahn
The Judgment of Paris: the revolutionary decade that gave the world Impressionism by Ross King
Fewer