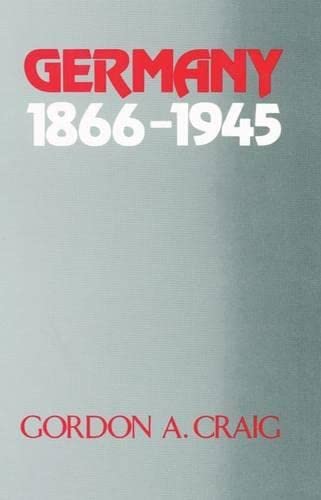 The Oxford History of Modern Europe

This is the history of the rise and fall of united Germany, which lasted only 75 years from its establishment by Bismark in 1870, and ended in the rubble of Hitler's regime.Gordon Craig not only analyses the political structures of and the foreign, social, and economic policies of successive governments, but also examines the individuals who dominated the period and the important intellectual and cultural influences at work. His fascinating chapter on the richdiversity of Weimar culture - Mann and Hesse, Marlene Deitrich and film, Brecht, Schonberg, Expressionist art, and the growth of psychoanalytic theory - is proof enough that this is not an ordinary history book.

LibraryThing member gmicksmith
Excellent and comprehensive even if the prose is turgid. This was my undergraduate text for the history of Germany and I thoroughly enjoyed it. I refer to it consistently to refresh my memory on the period in German history.
1 more
LibraryThing member charlie68
Very Readable.
Fewer