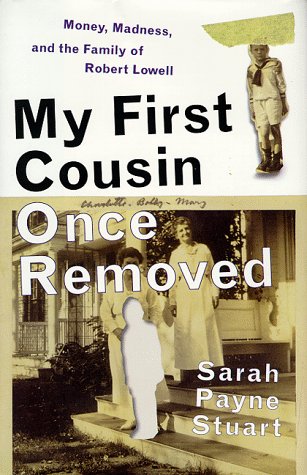 My First Cousin Once Removed: Money, madness, and the family of Robert Lowell

The art of being truly funny is an undervalued one in these angst-ridden times, but it is an ability that acclaimed novelist Sarah Payne Stuart has in abundance. Her talents have never been on more glorious display than in My First Cousin Once Removed, a memoir--at once hilarious, personal and sad--of her extraordinary Boston Brahmin family, whose most famous member is the legendary poet Robert Lowell, the author's first cousin (once removed). Sarah Payne Stuart grew up in a family of aristocratic lineage whose fortune had long ago been lost. (Among the many family documents cited is a Boston Globe article in which Lowell's bankrupt grandfather is quoted in his will as having left his children their good breeding and Boston heritage.) Stuart's upbringing carried with it a heady sense of privilege and entitlement, but without the money to back it up. This dichotomy--of being both anointed and strapped, of needing to keep up a brave front at all costs, even when members of successive generations of the family (including the author's brother and famous cousin) find themselves locked up in mental wards--forms the heart of this story. An irreverent and clear-sighted mediation on the claustrophobic yet seductive bonds of family, as well as an intimate portrait of a famous man, My First Cousin Once Removed is a wry and haunting story of survival in the midst of instability and dynastic decline. Praise for Sarah Payne Stuart and My First Cousin Once Removed "From a sometimes painful family history, Sarah Payne Stuart has created a poignant, funny, and ultimately triumphant memoir filled with great warmth and wisdom. Written in a refreshing, unforgettable voice which never falters nor sentimentalizes, My First Cousin Once Removed is a thoroughly terrific book." --Doris Kerns Goodwin "Stuart is a deft writer who knows to snare her audience with brilliant, bitter-black humor while touching lightly but with sure, probing fingers of our darker fears, our least favorite wounds." --Seattle Weekly… (more)

Becoming a poet : Elizabeth Bishop with Marianne Moore and Robert Lowell by David Kalstone
Anne Sexton : a biography by Diane Wood Middlebrook
Memories of a Catholic girlhood by Mary McCarthy
The Art of Shakespeare's Sonnets by Helen Vendler
Savage beauty : the life of Edna St. Vincent Millay by Nancy Milford
4 more
The journals of Sylvia Plath, 1950-1962 by Sylvia Plath
The Kiss by Kathryn Harrison
The Complete Poems of Emily Dickinson by Emily Dickinson
Robert Lowell: Setting the River on Fire: A Study of Genius, Mania, and Character by Kay R. Jamison
Fewer