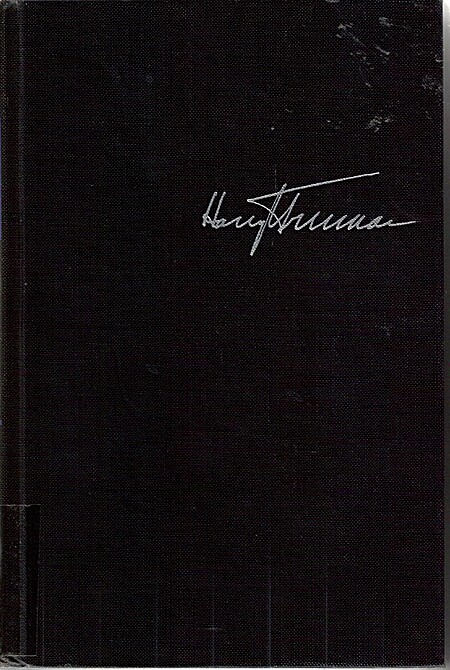 Harry S. Truman was thrust into a job he neither sought nor wanted by a call summoning him to the White House. There First Lady Eleanor Roosevelt told him that President Franklin Delano Roosevelt was dead. Two hours later, with little formality, he was sworn into office. "I had come to see the president," Truman recalls in this autobiography. "Now, having repeated that simply worded oath, I myself was president."With World War II raging in the Pacific, the looming decision of whether to drop the atomic bomb, and seemingly intractable labor issues at home, no chief executive ever fell heir to such a burden on such short notice.This book is an invaluable record of Truman's tumultuous first year in office, his youth in Missouri, and his rise in politics. He shares glimpses of his family life; clear-eyed appraisals of world leaders, including Winston Churchill, Charles De Gaulle, and Joseph Stalin; and candid disclosures about history-making national and international events.… (more)

LibraryThing member EricCostello
First volume of Truman's memoirs, which is rather uneven. The first segment covers his first days in office in great detail, and is one of the best records of that period available. The book then segues to auto-biography, which, while quite interesting, greatly interrupts the flow of the narrative and doesn't add all that much to what follows. When we pick up the thread of the rest of the book, which pretty much covers the May, 1945 - December, 1946 period, a lot of it is an overly detailed slog. In some cases, Truman quotes from documents in haec verba, including one long conversation with Churchill. Not an ideal thing for memoirs. It might have been better had Truman written a book specifically on the Potsdam Conference, which takes up a fair slice of the second half of the book, and in some cases, reads like minutes of the meeting. Flashes of the Truman wit and hard-headedness can be seen in the book, but for the most part, they seem to have been edited out. Slightly disappointing.… (more)

Memoirs By Harry S. Truman: Volume Two, Years of Trial and Hope by Harry S. Truman
Truman by David G. McCullough
Where the buck stops : the personal and private writings of Harry S. Truman by Margaret Truman
Man of the People: A Life of Harry S. Truman by Alonzo L. Hamby
The Haldeman diaries : inside the Nixon White House by H. R. Haldeman
6 more
Bess W. Truman by Margaret Truman
The Conquerors: Roosevelt, Truman and the Destruction of Hitler's Germany, 1941-1945 by Michael R. Beschloss
President Reagan: The Role of a Lifetime by Lou Cannon
Eisenhower : soldier and president by Stephen E. Ambrose
A world transformed by George Bush
Abuse of power : the new Nixon tapes by Stanley I. Kutler
Fewer