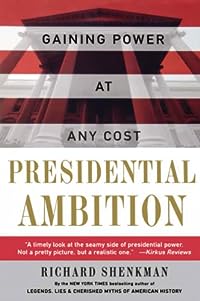 In this timely, provocative, illuminating, and often shocking book. New York Times bestselling author Richard Shenkman provides a vital context for understanding the American presidents, today and throughout history. Combining a potent narrative with persuasive and compelling insights, Shenkman reveals that it is not just recent presidents who have been ambitious--and at times frighteningly overambitious, willing to sacrifice their health, family, loyalty, and values as they sought to overcome the obstacles to power--but they all have. This volcanic ambition, Shenkman shows, has been essential not only in obtaining power but in facing--and attempting to master--the great historical forces that have continually reshaped the United States, from Manifest Destiny and Emancipation to immigration, the Great Depression, and nuclear weapons. As Shenkman describes the lives and careers of the most representative and colorful presidents from Washington to Nixon, he shows that those who succeeded in reaching the White House, whatever their flaws, were complicated human beings, idealistic as well as ambitious. Over time, however, they began to make increasingly troubling compromises, leading to a decline in t he mortal tone of American politics. What drove politics downward? In a stunning conclusion, Shenkman demonstrates that it wasn't a decline in presidential character that was responsible, but change--the dramatic transformation of the United States from a country of four million in Washington's day to more than a quarter billion today--that made running the country more complicated and difficult. Instead of things getting better and better they got worse and worse as people became used to increasingly promiscuous political practices. First John Adams played politics with national security. Then James Polk lied the country into war. James Buchana tolerated the bribing of congressmen. Ulysses S. Grant ignored shocking corruption. Rutehrford B. Hayes became the first of several presidents to win election through vote stealing. Grover Clevland pandered to immigrants. Teddy Roosevelt precipitated an international crises to improve his chances of election. FDR used the IRS to go after his political enemies. Harry Truman faked a war scare. John Kennedy played God with nuclear missiles. And Lyndon Johnson lied and lied and lied. Sympathetic but balanced in his presentation of the presidents' behavior, in his richly detailed portraits Shenkman shows just how resourceful they had to be to survive and succeed. Presidential Ambition--dramatic, lively, and nakedly honest--is a book that will permanently alter the way we think about past, present, and future American presidents.… (more)

First mothers : the women who shaped the presidents by Bonnie Angelo
Eyewitness to Power: The Essence of Leadership: Nixon to Clinton by David R. Gergen
Behind the Oval Office : winning the presidency in the nineties by Dick Morris
Abuse of power : the new Nixon tapes by Stanley I. Kutler
Richard Milhous Nixon : the rise of an American politician by Roger Morris
8 more
Lone star rising : Lyndon Johnson and his times, 1908-1960 by Robert Dallek
Taking charge : the Johnson White House tapes, 1963-1964 by Michael R. Beschloss
Wealth and Democracy: A Political History of the American Rich by Kevin Phillips
Campaigns : A Century of Presidential Races from the Photo Archives of the New York Times by Alan Brinkley
"To the best of my ability" : the American presidents by James M. McPherson
The arrogance of power : the secret world of Richard Nixon by Anthony Summers
Lincoln at Cooper Union: The Speech That Made Abraham Lincoln President by Harold Holzer
Governor Reagan: His Rise to Power by Lou Cannon
Fewer