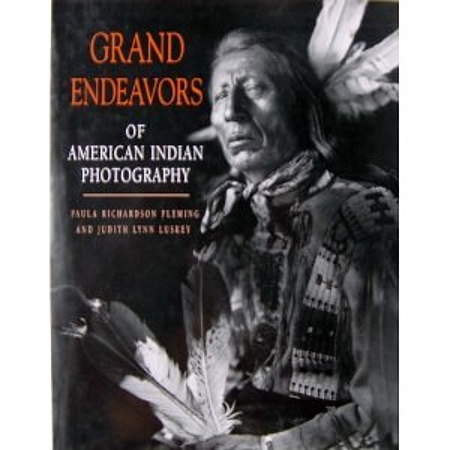 Grand Endeavors of American Indian Photography presents the masterworks of photographers who, about the turn of the century, were inspired to document the lives of the first Americans. Spurred by an almost universal conviction that Indian peoples would soon vanish forever, they sought to gather, as photographer George Wharton James proclaimed, "all that we possibly can ... ere it is too late." Their ranks included independent photographers - such as the maverick, bicycle-riding Sumner W. Matteson - who often lived among the people they photographed, gaining remarkable and unsurpassed access to the Brule Sioux of South Dakota and the Tlingit and Haida Indians of Alaska, among other nations. Other photographers set up studios at world's fairs and expositions. Like the Gerhard sisters of St. Louis, they seized the opportunity to photograph Indian delegations, including the aging faces of Geronimo, Osage chief Oh-Lo-Ho-Walla, and Arikara chief Red Star. Perhaps the best of the photographers were the pictorialists, Roland W. Reed and Edward S. Curtis. Combining a skilled art style with ethnographic detail, they produced lasting images of Native Americans of several nations: Pueblo, Navaho, Apache, Crow, Mohave, Cheyenne, Ojibway, Gros Ventre, Kiowa, and Blackfeet among them. Tracing the history of attempts to record the lives of American Indians, this book includes many images never before published. Reaching back to the early endeavors of painters, drawing on the journals of photographers and their interviews with Native Americans, the book reveals brave, resilient, and dignified peoples who have not vanished. In the words of George Horse Capture, a Gros Ventre, "We are here now, have been here for thousands of years, and we will always be here. We have fooled them all!"… (more)

Custer Died for Your Sins; An Indian Manifesto by Vine Deloria
Native nations : first Americans as seen by Edward S. Curtis by Edward S. Curtis
The North American Indians in Early Photographs by Paula Richardson Fleming
Portraits from North American Indian Life by Edward S. Curtis
Understanding Northwest Coast Art: A Guide to Crests, Beings and Symbols by Cheryl Shearar
4 more
I will tell of my war story : a pictorial account of the Nez Perce War by Scott M. Thompson
A long and terrible shadow : white values, native rights in the Americas, 1492-1992 by Thomas R. Berger
A Time of gathering : native heritage in Washington State by Robin Kathleen Wright
Looking at Indian art of the Northwest Coast by Hilary Stewart
Fewer