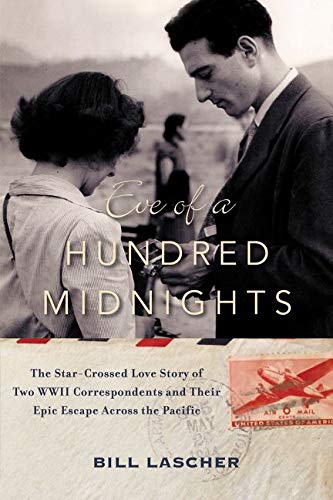 Eve of a Hundred Midnights: The Star-Crossed Love Story of Two WWII Correspondents and their Epic Escape Across the Pacific

On New Year's Eve, 1941, just three weeks after the attack on Pearl Harbor, the Japanese were bombing the Philippine capital of Manila, where journalists Mel and Annalee Jacoby had married just a month earlier. The couple had worked in China as members of a tight community of foreign correspondents with close ties to Chinese leaders; if captured by invading Japanese troops, they were certain to be executed. Racing to the docks just before midnight, they barely escaped on a freighter--the beginning of a tumultuous journey that would take them from one island outpost to another. While keeping ahead of the approaching Japanese, Mel and Annalee covered the harrowing war in the Pacific Theater--two of only a handful of valiant and dedicated journalists reporting from the region.… (more)

LibraryThing member jamespurcell
A good book about an interesting time and place; preWW2 China. Detailed and exhaustive research about the proponents add much interest but slow the pace. For a recent Stanford grad, Melville Jacoby managed to be in the right place and talk to the right people in these tumultuous times.

Hiroshima by John Hersey
Dispatches by Michael Herr
With the old breed, at Peleliu and Okinawa by E. B. Sledge
Are You Somebody : The accidental memoir of a Dublin woman by Nuala O'Faolain
A Train in Winter: An Extraordinary Story of Women, Friendship, and Resistance in Occupied France by Caroline Moorehead