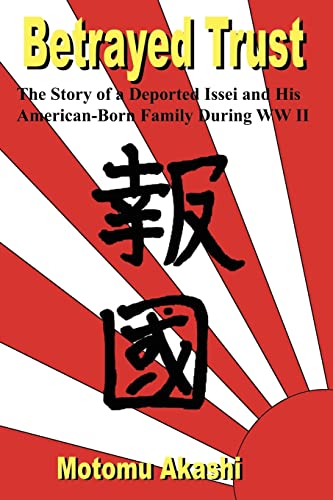 Betrayed Trust: The Story of a Deported Issei and His American-Born Family During WW II

Betrayed Trust illuminates why some Issei (first generation Japanese resident alien) and Japanese-Americans chose to give up on America rather than to stay with a nation that abused, condemned, rejected, incarcerated, and took away their freedom.  It is a compelling narration of an Issei and his American-born family who were imprisoned for almost four years during World War II under the custody of the U.S. Government.  Betrayed Trust reveals the most intimate thoughts of the author's father's secret political activities, efforts for resegregation, and involvement in creating a "true Japanese" environment at the Tule Lake Segregation Center.  The author discloses his father's activities as chairman of the Standing Committee of the Resegregation Group and as one of the founders of two super pro-Japanese organizations, the Sokoku Kenkyu Seinen Dan (Young Men's Association for the Study of the Motherland) and the Sokuji Kikoku Hoshi Dan (Society for Immediate Return to Serve the Motherland), which led to his removal by the Department of Justice from Tule Lake Segregation Center; his detention at the Santa Fe Interment Camp; his removal and segregation to a secret Japanese Segregation Camp #; his covert transfer to the INS Terminal Island Detention Station and ultimately to the Portland Detention Station for deportation as one of the most dangerous alien enemy.… (more)