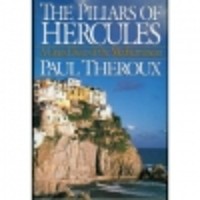 The Pillars of Hercules: A Grand Tour of the Mediterranean

In this modern Grand Tour, Theroux sets off from Gibraltar on a journey around the Mediterranean Sea. It is a long, lively, and occasionally dangerous trip, up the coast of Spain, along the Riviera, by ferry to the islands of Corsica, Sardinia, Sicily, and beyond. By foot, train, bus, and cruise ship, Theroux travels around Italy and the Greek islands, to Albania in a state of near anarchy and to war-torn Croatia. He sails into Istanbul, its minarets and mosque domes beckoning him to the Levant. Ahead are Damascus and the villages of Syria, shrouded in the cult of Assad; Israel, besieged by suicide bombers; Egypt, Morocco and Paul Bowles' Tangier. Exploring wild coastlines, probing through layers of tradition and culture, ancient and modern, tawdry and splendid, Theroux weaves the legends and siren calls of civilizations as old as time into a story about life on the Mediterranean today.… (more)

NY Times
For along with being an anti-tourist, Mr. Theroux prides himself on being something of the village atheist: religious enthusiasm of any kind fills him with equal-opportunity loathing. And why not? There are enough horrors to be apportioned among the great Mediterranean faiths, and Mr. Theroux, to give him credit, casts a skeptical eye on the murderous accomplishments of the secular powers as well.
— 1 more
Kirkus
Theroux bestows perhaps his greatest compliment of all to the journey itself: ``I knew I would go back, the way you went back to a museum, to look . . . and think.'' Never has he said that before. As satisfying as a glass of cool wine on a dusty Calabrian afternoon

LibraryThing member NellieMc
Excellent travel book, though not quite in the upper echelon. Excellent observations and writing, but there was still a remoteness that interfered with real knowledge. Do have to admire the author's courage -- he definitely traveled to get the story, even when it was difficult if not dangerous. I think I would have also preferred more of an historical context.… (more)
7 more
LibraryThing member ubaidd
The Pillars of Hercules is a "Grand Tour of the Mediterranean", an encounter with the most storied sea on the planet. Paul Theroux is well up to the task of bringing a his unique brand of spartan travel to a journey that has been written about since Homer's Odyssey.

Reading the travelogues of Paul Theroux is not just an encounter with exotic geography and customs, it is also an intensely literary experience. Mr. Theroux is a scholar, a linguist and in his uniquely curmodgeonly manner a keen observer of men. He is funny and mindful of his sour temper as he pokes fun at his own style. He makes generalizations as he sneers at the "snap judgments and obnoxious opinions" expressed by Evelyn Waugh in Labels (1930), an account of that writer's cruise around the Mediterranean. I found his description of an encounter with another traveler hilarious -

"In life, it is inevitable that you meet someone just like yourself. What a shock that your double is not very nice, and seems selfish and judgmental and frivolous and illogical."

The book begins on a fiesty note - at the Rock of Gibraltar, one of the "Pillars of Hercules" where the author clearly prefers the company of apes to 'tourists'. Tourists he thinks are the worst kinds of humans but he promises early on not to talk about them. Mr. Theroux of course is not a tourist, he is a traveler. The interesting fact is that I agree with his characterization, at least of himself. I found the overall tone less vitriolic than the one employed in Ghost Train to the Eastern Star and Dark Star Safari. There are three cities the author showers considerable praise on - Dubrovnik, Jerusalem and Venice. He is kinder to the Italians but ruthless in his criticism of the Greeks. He relates his frustrating experience with Israel's security and then talks about his meeting with American expat Paul Bowles that borders on the surreal. I've encountered Istanbul twice in Mr. Theroux' works - once in Ghost Train to the Eastern Star and once in Pillars of Hercules - and I can't wait to go visit that grand city. There are encounters with other writers and other, more colorful characters, each contributing to a delightfully readable account.

Mr. Theroux says -
"But then a travel book is a very strange thing, there are few good excuses for writing one--all of them personal..The fairest way of judging travel books is by their truth and their wit"

If he were to judge his work by his own standards, I would say Mr. Theroux would be very proud. Highly recommended.… (more)
LibraryThing member Don1
I'm a big fan of Theroux's travel books and this is one of his best. Some people think Theroux is too cranky and too blunt but that's part of what I find appealing in his books. I don't always agree with him but his books are never boring.
LibraryThing member charlie68
Well-written and funny.
LibraryThing member satyridae
Choppy and disconnected, but still well-written and fun.
LibraryThing member soylentgreen23
Certainly the best of Theroux's work - though I have yet to read a book of his that wasn't at least interesting. His grand idea this time is to travel from Gibraltar to Ceuta (Morocco), the two fabled pillars of Hercules, but to do so the long way round. That's the principle, at any rate. What follows is a uniquely bizarre adventure that swings this way and that around the Med; nothing is as simple as it seems. Wonderfully fun.… (more)
LibraryThing member sarcher
The Mediterranean is simultaneously a barrier and a shared resource depending on how it's used and viewed. Does influence span it, or is influence limited by it? The travel limitations faced on Theroux's overland sections are contrasted by the fact that the sea is right there for travel, illustrated by the constant retreat to a ferry, cruise ship, etc. Really enjoyed the contrast of the different cruise experiences.… (more)
LibraryThing member untraveller
Excellent writing about a clockwise circuit of the Mediterranean, more or less. He skips a few places due to the political and military nature of that spot of geography, but does a good job getting into and eyeballing places the average person would not go. A really good eye for some incriminating detail....
Fewer