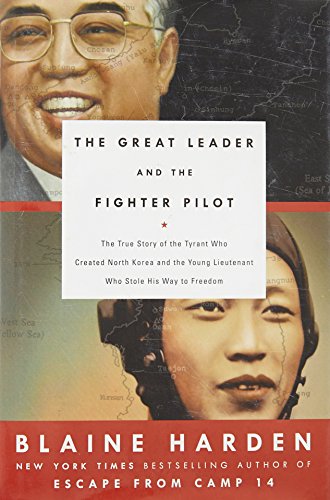 The great leader and the fighter pilot : the true story of the tyrant who created North Korea and the young lieutenant who stole his way to freedom

"From the bestselling author of Escape from Camp 14, the murderous rise of North Korea's founding dictator and the fighter pilot who faked him out In The Great Leader and the Fighter Pilot, New York Times bestselling author Blaine Harden tells the riveting story of how Kim Il Sung grabbed power and plunged his country into war against the United States while the youngest fighter pilot in his air force was playing a high-risk game of deception--and escape. As Kim ascended from Soviet puppet to godlike ruler, No Kum Sok noisily pretended to love his Great Leader. That is, until he swiped a Soviet MiG-15 and delivered it to the Americans, not knowing they were offering a $100,000 bounty for the warplane (the equivalent of nearly one million dollars today). The theft--just weeks after the Korean War ended in July 1953--electrified the world and incited Kim's bloody vengeance. During the Korean War the United States brutally carpet bombed the North, killing hundreds of thousands of civilians and giving the Kim dynasty, as Harden reveals, the fact-based narrative it would use to this day to sell paranoia and hatred of Americans. Drawing on documents from Chinese and Russian archives about the role of Mao and Stalin in Kim's shadowy rise, as well as from never-before-released U.S. intelligence and interrogation files, Harden gives us a heart-pounding escape adventure and an entirely new way to understand the world's longest-lasting totalitarian state"--… (more)

LibraryThing member Cherylk
I absolutely fell in love with Mr. Harden's novel, Escape From Camp 14. It was a riveting read. I could not stop reading the book. So you could say I was excited and intrigued to read Mr. Harden's next novel. Why this book was not a one seat read like the prior novel, it was still a very great read. I like reading military books. Yet it seems that most of my reading is during the WWII time period. I am not that familiar with the Korean War. So this book was a good eye opener to this particular war.

As a Korean myself, I am so glad that I was born in South Korea and not North Korea. If I had been born in North Korea I now that I may not ever be here today. It is scary as I was reading this book just how under the radar Kim passed. Due to his young age. Even Stalin thought he was the puppet master. He was wrong. Kim was a ruthless leader, who only cared about himself.

No was a courageous man. I can not imagine the extreme pressure he went through living under Kim's rule while trying to find a better life outside of North Korea.

What I like the most about Mr. Harden's writing is that he gives you all of the facts and holds nothing back. So you get a history lesson with some very intriguing people that have a story to tell.… (more)
4 more
LibraryThing member Stbalbach
The Great Leader and the Fighter Pilot is a character-driven "nonfiction thriller" about the origin of Kim Il-sung and the state of North Korea. It is also a good summary of the Korea War. Considering so few know about this "forgotten war" (including myself) it's an easy and entertaining way to learn more. "Entertaining" because the book is also the story of No Kum-sok, a North Korean fighter pilot who famously defected. His defection story adds a "thriller" element and is balancing force to Kim Il-sung's awful character, although the two historically had little to do with one another. Harden highlights an aspect of the war that is almost completely unknown among the American public - during the strategic bombing of the north upwards of 1.5 million civilians were killed or about 20% of the entire population, men, women and children - largely with napalm. It's on the scale of the Holocaust, mathematically speaking. The Kim dynasty has not forgotten and it's one of the core planks in their propaganda campaign to retain power. Another example of American foreign policy blowback creating the thing it sought to prevent.… (more)
LibraryThing member 1Randal
I really, really enjoyed Mr. Harden's earlier work, Escape From Camp 14. Therefore, I was looking forward to reading this, his next effort. I'm happy to report that he didn't disappoint! Fascinating book. Had a hard time putting it down. Makes you wonder, how in the world can the world stand by and let these madmen rule the poor North Korean people? Way to go, Mr. Harden, job extremely well done!… (more)
LibraryThing member drmaf
Parallel stories of the rise and rise of Kim Il Sung from shabby guerrilla to unchallenged despot of the most brutal and secretive regime on earth, and one of his young air force pilots, No Kum Sok, who for years concealed a deep hatred of Communism under a cloak of excessive patriotism and party loyalty while dreaming of the day he could fly his MiG15 over the South Korean border to freedom. No's flight caused a sensation in the west and considerable embarrassment for the US, who had promised $100000 for the first Red pilot to deliver a MiG to them, only to discover that No had never heard of the reward and didnt particularly want it anyway. How this young man planned and undertook his desperate flight and how he constructed a new life for himself in the US is a terriffic tale of determination and desire for freedom, contrasted with the utterly sordid rise of Kim Il Sung through unparalleled ruthlessness and brutality, adept political skills and an uncanny ability to bounce back from near disaster, aided by copious fawning to his Chinese and Russian masters even while he was outwitting them. Really good demonstration of the best and worst of human nature, as well a good adventure story. Great stuff.… (more)
LibraryThing member wagner.sarah35
I came to this book with only the most basic understanding of the Korean War and while this book's mission is not to retell that story in detail, I do feel I have a better understanding of how the dictator Kim Il Sung came to power and the kind of culture he created in North Korea, which apparently still persists today. I also had no idea that a North Korean pilot had defected to the south by landing a MiG at an American air base, but it certainly made for an exciting story! Overall, this was a good read and excellent for understanding how North Korea came to be what it is today.… (more)
Fewer

Escape from Camp 14 : one man's remarkable odyssey from North Korea to freedom in the West by Blaine Harden
The Korean War by Max Hastings
Red Notice: How I Became Putin's No. 1 Enemy by Bill. Browder
Hue 1968: A Turning Point of the American War in Vietnam by Mark Bowden
The History of Korea by Woo-Keun Han