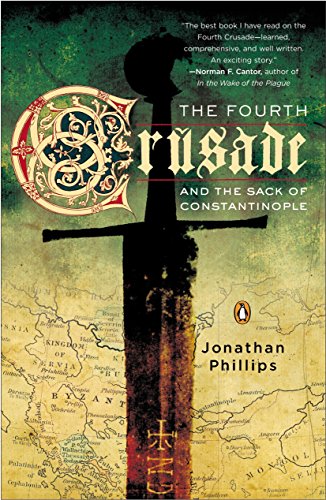 The Fourth Crusade and the Sack of Constantinople

In April 1204, the armies of Western Christendom wrote another bloodstained chapter in the history of holy war. Aflame with religious zeal, the Fourth Crusade had set out to free Jerusalem from the grip of Islam. But after a dramatic series of events, the crusaders turned against the Christian city of Constantinople, the heart of the Byzantine Empire and the greatest metropolis in the known world. The crusaders spared no one in their savagery: they murdered old and young, raped women and girls, desecrated churches and plundered treasuries, and much of the city was put to the torch. Some contemporaries felt God had approved this punishment of the effeminate, treacherous Greeks; others expressed shock and disgust. History has judged this as the crusade that went wrong, and even today its violence and brutality provokes deep ill-feeling towards the Catholic Church.--From publisher description.… (more)

LibraryThing member CBJames
The Fourth Crusade and the Sack of Constantinople by Jonathan Phillips tells the story of what went wrong. The crusade began as an attempt to send large numbers of reinforcements to the crusader kingdoms in Palestine to try and recapture Jerusalem and ended up invading several Christian kingdoms culminating in the destruction of Constantinople, the most splendid city in the Christian world of its day. It takes many mistakes and many people for something to go so disastrously wrong, and it is to Mr. Phillips credit that he does such a good job explaining how the Fourth Crusade came about and then came to such a bad end.

The crusade started with an overreaching promise to send 30,000 men to defend the crusader kingdoms and a contract with Venice to build enough ships to carry them. Because England did not participate in this crusade and because several other groups decided to bypass the planned gathering in Venice and go straight to Palestine not enough forces gathered to cover the contracted cost of building the ships. To pay off the dept, the crusaders agreed to take the coastal city of Zara, which the doge of Venice had long wanted to control. Still not enough money was available to pay the debt for the ships, so the crusaders joined forces with Alexus IV, son of the deposed emperor of Byzantium in an attempt to dethrone Alexus III and take Constantinople. Afterwards, Alexus IV was not able raise enough taxes to pay his debt to the crusaders and was dethroned by his own people. In the end, because the political situation in Constantinople was so chaotic the Greeks were not able to adequately defend their city and it fell to the crusaders.

In the end, the venom intended for the Muslim population of the holy land was unleashed on the Christians of Constantinople. Churches and monasteries were raided. Relics were looted. Money and valuable objects were stolen. The silver leaf that decorated the Hagia Sophia was pealed away, chiseled off and melted down. Not even nuns in their convents were safe.

The crusaders then established a kingdom in Constantinople and tried to bring the rest of Byzantium under their control. They never made it to the holy land in the end, nor did their kingdom last very long. Within a century, the Greeks were back in control of Byzantium and Constantinople, though even they fell shortly afterwards to the Turks.

Mr. Phillips explains all of these events using eyewitness accounts from both sides of the story. He gives the reader the details needed to illuminate the events and to understand the motivations of the people involved. It's hard to find any heroes in the Fourth Crusade, everyone's motives are so compromised either at the start of the crusade or by its end. That the crusades targeted both Muslim and Jewish populations, most people know. The Fourth Crusade and the Sack of Constantinople is a useful book because it details the extent to which the crusades targeted Christians and did so in the name of God. In the final analysis, there is not much to admire in the notion of a crusade, and we should be on our guard whenever we hear someone call for one. Fail to learn lessons of history at your own risk.… (more)
4 more
LibraryThing member niklin
Phillips makes good explanation of how the fourth crusade ended up plundering and sacking Christian Constantinople, rather than fighting the infidels in the holy land. Accordingly, the crusade got into a financial despair, due to an expensive contract with the Venetians to provide a fleet and transport to Palestine. This caused the crusaders to search for any means to end their dept, if they wanted the crusade to go on. At first they conquered the Christian city of Zara for the Venetians, but this only provided them with a breathing space. Thereafter they got a proposition they couldn’t refuse. By helping Alexius IV to the Byzantine throne, he would end their entire finical problem, and even give them much needed military reinforcement in their quest for Jerusalem. The hopelessly corrupt Byzantine Empire proved to be no match for the rather small army of crusaders, and the extremely unpopular Alexius IV, was soon on the throne in Constantinople. But the honey moon was brief. The Latin crusaders were looked upon with the outmost repugnance and hate by the Orthodox Greeks of Constantinople. Alexius realized that his days were numbered if he didn’t stop bankrupting his own treasures by constantly paying enormous sums to the crusader camp outside the city. Thereby the crusaders felt betrayed by, in their view, the equal repugnant and untrustworthy Greeks. The growing tension ended with the crusaders again conquering the city, but this time they had a score settle. The city was partially burned to the ground, the citizens were murdered and raped en masse, and both the city (including the churches) and the citizens were plundered of anything valuable. Also the Byzantine Empire was replaced by a Latin empire ruled by a king who was one of the crusaders. The crusaders never got to the holy land. Instead they were stuck in ever lasting fight for the survival of the Latin Empire, against Orthodox neighbors. This Empire lasted sixty years, and during that time it was tapping the recourses of the Western world in their struggle for the holy land against the Muslims, leading to the loss of the last Christian strong point in Palestine. Also in the long run, it certainly made it easier for the Ottomans to finally destroy the Byzantine Empire 1453, since the resurrected Byzantine Empire was only a shadow of the former one.
Phillips provides a good story well described in the surrounding era, with some small side tracks to make it more interestingly. The essence of the book is surely that he disproves the belief that the crusade from the beginning was a plot by Latin Church to conquer and subdue the Orthodox Byzantine Empire. One major critique of the book is that at times lacks a deeper discussion of how some major events of the crusade evolved, and what might have caused the leaders to their decisions. But at the same time, it is hard to write history books about the Middle Ages, due to the form of the sources, so too much discussions will just end up with a book full of jaunty thoughts of the author. In other words, a good read…… (more)
LibraryThing member woollymammoth
A well researched and engagingly written history of the Fourth Crusade which got me thinking at about the situation of the world at the moment. We've never stopped fighting the crusades in a way.
LibraryThing member atiara
I got bored of this and ended up mostly skimming this book. There's no suspense when you know how it all ends.
LibraryThing member gougework
Extremely readable updated history which corrects many of the illusions that the crusaders attacked Constantinople preemptively. Presents narrative from various eyewitness accounts from Venetian, Greek, Latin, French, Noble and Peasant viewpoints
Fewer