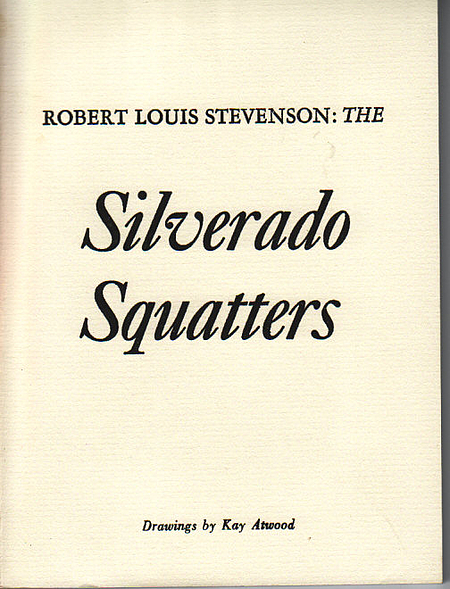 The scene of this little book is on a high mountain. There are, indeed, many higher; there are many of a nobler outline. It is no place of pilgrimage for the summary globe-trotter; but to one who lives upon its sides, Mount Saint Helena soon becomes a center of interest. It is the Mont Blanc of one section of the Californian Coast Range, none of its near neighbors rising to one-half its altitude. It looks down on much green, intricate country. It feeds in the spring-time many splashing brooks. From its summit you must have an excellent lesson of geography: seeing, to the south, San Francisco Bay, with Tamalpais on the one hand and Monte Diablo on the other; to the west and thirty miles away, the open ocean; eastward, across the corn-lands and thick tule swamps of Sacramento Valley, to where the Central Pacific railroad begins to climb the sides of the Sierras; and northward, for what I know, the white head of Shasta looking down on Oregon.The author's experiences at Silverado were recorded in a journal he called "Silverado Sketches," parts of which he incorporated into Silverado Squatters in 1883 while living in Bournemouth, England, with other tales appearing in "Essays of Travel" and "Across the Plains." Many of his notes on the scenery around him later provided much of the descriptive detail for Treasure Island (1883).… (more)

LibraryThing member gbill
This slim volume was really only of interest to me because it detailed Stevenson's wanderings in Northern California, including a Petrified forest and early Napa Valley wineries.

Quotes:
On travel:
"It is very curious, of course, and ancient enough, if that were all. Doubtless, the heart of the geologist beats quicker at the sight; but, for my part, I was mightily unmoved. Sight-seeing is the art of disappointment."

On wine (CA wine has come a long way since 1883):
"A nice point in human history falls to be decided by Californian and Australian wines. Wine in California is still in the experimental stage. ... The smack of Californian earth shall linger on the palate of your grandson."

On Jews and the power of money to make one free:
"Take them for all in all, few people have done my heart more good; they seemed so throroughly entitled to happines, and to enjoy it in so large a measure and so free from after-thought; almost they persuaded me to be a Jew. There was, indeeed, a chink of money in their talk. They particularly commended people who were well to do. 'He don't care - ain't it?' was their highest word of commendation to an individual fate; and here I seemed to grasp the root of their philosophy - it was to be free from care, free to make these Sunday wanderings, that they so eagerly pursued after wealth; and all this carefulness was to be careless."

On capitalism:
"The village usurer is not so sad a feature of humanity and human progress as the millionaire manufacturer, fattening on the toil and loss of thousands..."… (more)
1 more
LibraryThing member MrsLee
This is a recounting of the time Robert Louis Stevenson spent in the hills of Calistoga county trying to recover from his illness. He and his wife (and her two mostly grown sons) spent their honeymoon of three months in an old abandoned mining office/bunkhouse. I would call it camping, considering the condition the place was in, he called it squatting because they didn't have permission from the absentee owner, nor were they paying rent.

Much of the writing is picturesque, especially if you are familiar with the area. He pokes light fun at the situation, the difficulties, the people around him and himself. Be ready for some racial slurs and stereotyping as was sadly typical of the times. Still, his observations of natural history, human nature and life in general, along with his lovely turn of phrase, make this an interesting small episode in California history.… (more)
Fewer