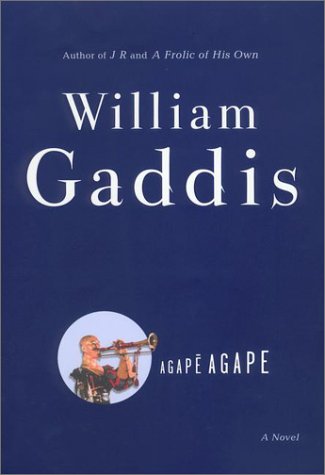 The late William Gaddis wrote four novels during his lifetime, immense and complex books that helped inaugurate a new movement in American letters. Now comes his final work of fiction, a subtle, concentrated culmination of his art and ideas. For more than fifty years Gaddis collected notes for a book about the mechanization of the arts, told via a social history of the player piano in America. In the years before his death in 1998, he distilled the whole mass into a fiction, a dramatic monologue by an elderly man with a terminal illness. This "man in the bed" lies dying, thinking anxiously about the book he still plans to write, grumbling about the deterioration of civilization and trying to explain his obsession to the world before he passes away or goes mad. Agape- Agapecontinues Gaddis's career-long reflection via the form of the novel on those aspects of the corporate technological culture that are uniquely destructive of the arts. It is a stunning achievement from one of the indisputable masters of postwar American fiction.… (more)

LibraryThing member LizaHa
I read this book while in a haze of pain/painkillers, after having been holed up for several days after having spilled some coffee on my legs and gotten some crazy burns. I have to assume these circumstances affected my impression of it which is extreme and immediate and a little bit hysterical, much like the book itself. In fact, I am pretty sure I am overidentifying in a kind of absurd way, but I have to say in my defense that the book invites it.

What struck me most while reading Agape Agape was the sense that we are all absolutely doomed with no hope of any kind of authentic experience in our lives, much less authentic art, but since we have never known anything better all we can do is pursue more, more, more mediocrity and false experience in our increasingly mechanized and soulless age, the falcon cannot hear the falconer, things fall apart, the center cannot hold, our bodies are falling apart, our life work is unaccomplished and even if it were accomplished there would be none among the duped, doped and stupefied masses to read, hear or comprehend it. I thought of, you know, American Idol, celebration of it-could-be-me mediocrity. I thought about how it seems like more people want to learn how to write than learn how to read, and don't seem to consider the latter a prerequisite for the former. I thought about my own slide into indulged, entertained, look-I'm-participating-on-by-writing-this-review-on-goodreads inanity. Then I thought about how even reading this book is kind of like playing a player piano because it's pauseless stream of consciousness enters your own so that it's as though you are thinking these thoughts yourself and participating, but actually it is just taking you over. Then I thought it was time to finish up the book, get out of the house, and lay off the vicodin for awhile.

After taking just a step back (but only a little one, I should have waited longer, I think) the strongest impression I was left with was the sense of the limitation of the author. While I was reading it felt absolutely true that the player piano was a sign and symbol of the wearing down of some previous not-exactly-delineated time when experience could have been authentic and art both true and truly appreciated, maybe here is an example:

"...what happened? What happened! Go back to that biggest thrill in music is your own participation where did it tip, where did it go from participating even in these cockneyed embraces with Beethoven and Wagner and, and Hofmann and Grieg and these ghostly hands on the, what took it from entertaining to being entertained? From this phantom entertainer to this bleary stupefied pleasure seeking, what breaks your heart. 'Discover your unsuspected talent' that's what breaks your heart, losing that whole, that loss of a kind of innocence that crept in, drifting away of that romantic intoxication that was really quite ridiculous but it was, no it was really quite wonderful, for the first time music in homes anyone's home 'every member of the household may be a performer' this ad says, discovering his unsuspected talent with his feet, this romantic illusion of participating, playing Beethoven yourself that was being destroyed by the technology that had made it possible in the first place..."

Everyone knows this feeling, right? And by coincidence I was reading Benjamin's "The Work of Art in the Age of Mechanical Reproduction" at the same time, and I want to write about that more. But here, even though the feeling behind his argument is so forcefully conveyed, the argument itself is not quite made. The feeling in the end is that the book has failed, and the sense of this failure was more compelling than the argument itself. It ends, "That was Youth with its reckless exuberance when all things were possible pursued by Age where we are now, looking back at what we destroyed, what we tore away from that self who could do more, and its work that's become my enemy because that's what I can tell you about, that Youth who could do anything." And THAT is what breaks your heart.… (more)
4 more
LibraryThing member HadriantheBlind
Gaddis' last published work of fiction. Takes the form of a rambling monologue from a dying man about his life, his shattered will to live, his heirs fighting over his other will, technology, the madness of crowds and the herd mentality, the mechanization of art, disease, death, and so forth.

One only wonders what Gaddis would have thought of AutoTune.… (more)
LibraryThing member abirdman
Maddening, posthumous, short, this book was never meant to be published. It appears to be notes that were left out of the author's previous two novels. Read it as an addendum to "A Frolic of His Own' if you can't ever get enough of Gaddis.
LibraryThing member librarianbryan
Hardcore Gaddis fans will appreciate this insight to his work and philosophy. A lot of us have waited a long time to see the perpetually edited work of Gaddis' best characters, Jack Gibbs.native son
LibraryThing member JimElkins
What is a Rant?

This is Gaddis's fifth and last book. Even with a large font and judicious line spacing, the book doesn't quite make 100 pages. A really excellent Afterword by Joseph Tabbi makes it 113 pages. It's a monologue, in broken grammar and logic, by a dying man. He thinks of his unfinished book on the history of the player piano, and he fights the effects of his medication and his illness. The theme is the relentless mechanization of the imagination and art.

I read this because it's been noted that Gaddis read Bernhard late in his life, and this book is said to show Bernhard's influence. My initial interest was to see whether the rant -- by which I mean Benhard's endless, relentless and compulsive monologues -- could be the object of emulation. What can be emulated from an excess of formless bile?

I'd imagine Bernhard would have secretly admired the philosophic and historical complaints here, and he would have nastily disparaged Gaddis's lingering worship of high culture and the erudition that makes it possible. I also picture him disparaging Gaddis's the formal tricks Gaddis uses to produce his stream of consciousness text: he changes subject in the middle of a phrase, he breaks clauses with apostrophes, and in general he tinkers with the form of writing instead of letting his anger and unhappiness ruin his grammar. The closing page of "Agape Agape" is moving, but not because of its echoes of Bernhard; it sounds like wisdom literature, well in control of the painful idea it wants to communicate.

A rant, I conclude, cannot be an object of emulation. Not because it proceeds from some pure unstoppable dissatisfaction, but because a rant, in Bernhard, is a kind of writing that happens when everything is torn down, so it fights for air. The narrator in this book is not in control of his body or the sequence of his thoughts, but the author is.

This book cannot be read without some homework. It's important, at the least, to know:

1. Agape (Christian love) agape (ruined) is Gaddis's formula for the loss of imaginative freedom, and it matters that the Christian agape is a love between brothers: for Gaddis, the author, if not for the narrator, real acts of imagination and art happen in friendship, in love. Tabbi has useful biographical information about this, regarding Gaddis's friendship with Martin Dworkin.

2. One of this book's, and Gaddis's, central texts is a verse by Michelangelo. In the original:

In Gaddis's translation (extracted from the prose in which he places it, p. 94):

3. It's also important to re-read Tolstoy's "Kreutzer Sonata" to recall the ambivalent hold of music; even though music freely played (as opposed to mechanically reproduced on a player piano) is this book's theme, music itself is not an unambiguous synecdoche for all the arts, or even for good art.… (more)
Fewer