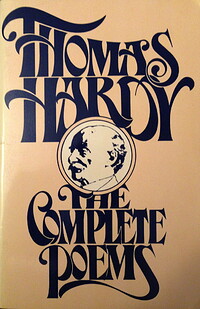 The Complete Poems of Thomas Hardy

Thomas Hardy's first love was always poetry. It was not until 1898, when he was fifty-eight years old, having already established his reputation with fourteen novels and over forty short stories, that his first book of poetry, Wessex Poems was published. For the final thirty years of his life he abandoned fiction and devoted himself entirely to poetry. It is a tribute to his remarkable powers of creativity that he is now not only regarded as one of the most important English novelists but is also recognised as a poet of major stature and ever increasing popularity. The Complete Poems , edited by James Gibson, includes all of Hardy's prolific output of more than nine hundred poems, complemented by a detailed notes section. Collected in this single volume are his eight books of verse, all the uncollected poems, 'Domicilium' and the songs from The Dynasts. This new edition contains an additional poem, The Sound of Her .… (more)

LibraryThing member alaudacorax
This is a review of the particular edition I own and I'm writing it to vent my feelings on the ugliness of the book. Mine is the hardback of the Palgrave Macmillan edition and it's available (in the UK, at least) 'print on demand'. If you look at 'Popular covers', you'll see a couple of rather
Show More
nice-looking covers with a scene of a country church. This is what Amazon shows. You will also see a grey and ugly one with a strange litte box with spikes sticking out of it, this in paler grey. It looks like a science textbook. This is what actually turned up on my doorstep. I've never seen a hardback with a more glaringly inappropriate cover and I assume it's a standard cover for all their 'print on demands' (and, even then, I suspect the designer had some warped grudge against the world in general). Not an ornament to anyone's bookshelves.

I suppose I should say a bit about the contents. It contains every poem Hardy is known to have written (unfortunately, it seems to be the only hardback available that does so). They are set out in clear and reasonably-sized print. There is little else: a very short introduction and some notes on publication history of and changes made to individual poems, and the usual indices at the back. It also has a small number of illustrations that Hardy did for the original publications.

I'm not going to star it. I'd have to give it five stars for the contents and half a star, at most, for the actual book and an average wouldn't do justice to my feelings on either.
Show Less