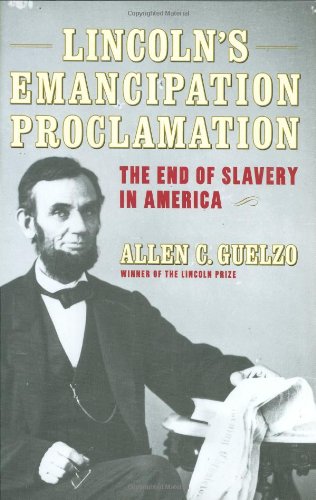 Lincoln's Emancipation Proclamation : The End of Slavery in America

"I do order and declare that all persons held as slaves...are, and henceforward shall be free...." No other words in American history changed the lives of so many Americans as this declaration from Abraham Lincoln's Emancipation Proclamation. Born in the struggle of Lincoln's determination to set slavery on the path to destruction, it has remained a document of struggle. What were Lincoln's real intentions? Prizewinning Lincoln scholar Allen C. Guelzo presents, for the first time, a full scale study of Lincoln's greatest state paper. Using unpublished letters and documents, little-known accounts from Civil War-era newspapers, and Congressional memoirs and correspondence, Guelzo tells the story of the complicated web of statesmen, judges, slaves, and soldiers who accompanied, and obstructed, Abraham Lincoln on the path to the Proclamation. The crisis of a White House at war, of plots in Congress and mutiny in the Army, of one man's will to turn the nation's face toward freedom--all these passionate events come alive in a powerful narrative of Lincoln's, and the Civil War's, greatest moment.… (more)