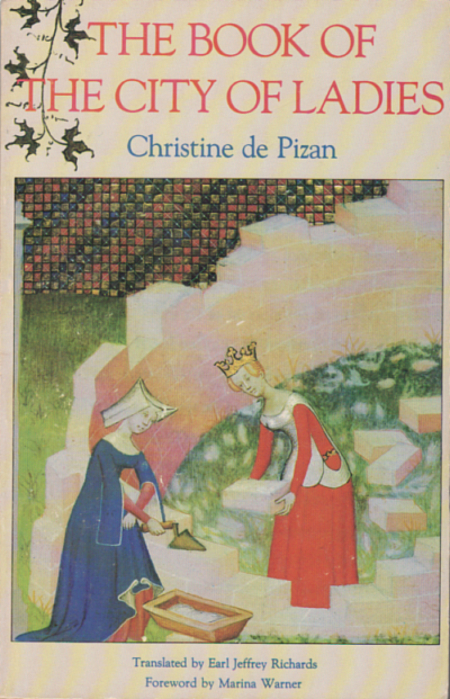 The Book of the City of Ladies

In dialogues with three celestial ladies, Reason, Rectitude, and Justice, Christine de Pizan (1365-ca. 1429) builds an allegorical fortified city for women using examples of the important contributions women have made to Western Civilization and arguments that prove their intellectual and moral equality to men. Earl Jeffrey Richards' acclaimed translation is used nationwide in the most eminent colleges and universities in America, from Columbia to Stanford.

LibraryThing member grheault
Ladies, ladies! Christine de Pizan, in the 15th century, gives courtly advice, and its rather good, up to date, interesting. Her mere existence as a writer is testimony to her courtly skills.
4 more
LibraryThing member TakeItOrLeaveIt
reading 'The city of ladies' is very much like having blue balls. ie comical torture. the book is ultimately Christine de Pizan's pity party. I dig her, don't get me wrong and I understand the relevance of the book for the feminine movement however I feel like instead of slandering men and going on and on about 'how this woman did this' and 'this woman did that' Christine should take a more psychological look at it, and not rely on God, and the three mystery ladies she makes up: Reason, Rectitude, and that other one. it's kind of an odd approach to have god justify the reason women reign supreme, don't ya think? I totally see where she's coming from and I know I seem like a chauvinist for going against her yadda yadda I just think the fantasy fairy tell ga ga isn't really the way to go about it. but hey this was written a long time ago. gotta give it her for getting some cred back in the day...
SO GLAD TO BE DONE WITH THIS! OMG. the last page was hillarious too. THe City of Ladies (ie the utopia of Christine's fair lady society! triumph! religion! just! rationality! logic! crazy gurl!)… (more)
LibraryThing member littleredcow
I like Christine de Pizan -- she resonates with me, and strikes me as a woman with a very clear voice and definite confidence. What's really interesting is, she's extremely defiant, but somewhat passive-aggressively so...always apparently demurring and humbling herself, yeah, but at the same time, totally (and freely) re-interpreting basically all of history and literature in favor of all the Ladies out there. I mean, she's talking to these goddesses like Boethius talks to Philosophy. She puts herself right at the center of the stage, for to later enlighten women. I don't know how else to say it: She has guts. And she's really, really bright and well-educated. Maybe I'm just a nerd, but I consider her a role model for young women.… (more)
LibraryThing member Unreachableshelf
A fifteenth proto-feminist tretise that women's virtue and capacity for learning is equal to men's, largely told through examples from Christian and Classical history. Anybody who is planning to write a work of historical fiction or fantasy in a world similar to Renaissance Europe with feminist heroines would do well to take Christine de Pizan in an example in how to make a character seem believably a product of her time rather than of the twenty-first century.… (more)
LibraryThing member page.fault
I read this in the 9th grade (and I know what a walkman is, so you can judge for yourself how long ago that was), so I'm pretty sure that (a) I didn't precisely get the maximum value out of the text, and (b) my memories do not do the book justice. I did a project on the role of women in medieval and renaissance times, and had a very hard time convincing my teacher that primary sources from the female perspective basically didn't exist. This is one of the very, very few examples. In the book, de Pizan discusses contemporary stereotypes of her gender and argues against certain negative portrayals. At a time in which women were considered to be ruled by passion, while men were ruled by reason, de Pizan argues strongly that women should also be ruled by reason. She does, however, maintain a dichotomy between the sexes, attributing gentleness, compassion, etc, to women and (if I remember correctly) decisiveness and action to men. She argues that the differences in nature between the genders itself implies an inherent difference in the roles that the gender is designed to take. To me, her argument here is interesting in itself, as she does not appear to address how she herself is in a position typically held by men. She also has a long section in which she expounds upon the female's role as wife and her duty towards her husband. An interesting but not precisely entertaining read.… (more)
Fewer