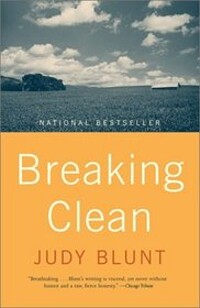 In this extraordinary literary debut third-generation homesteader Judy Blunt describes her hardscrabble life on the prairies of eastern Montana in prose as big and bold as the landscape. On a ranch miles from nowhere, Judy Blunt grew up with cattle and snakes, outhouse and isolation, epic blizzards and devastating prairie fires. She also grew up with a set of rules and roles prescribed to her sex long before she was born, a chafing set of strictures she eventually had no choice but to flee, taking along three children and leaving behind a confused husband and the only life she’d ever known. Gritty, lyrical, unsentimental and wise, Breaking Clean is at once informed by the myths of the West and powerful enough to break them down.

LibraryThing member NellieMc
I kept trying to find something to criticize this book, but everything I found centered around I wanted to know more -- about the author, her life, her family, what inspired them. And yet, after reading this tale of growing up in a very hardscrabble, even mean, isolated environment where "nonsupportive" governs everything, I still felt I have been deeply involved and given understanding. A really well written, illustrative view of a way of life that, while modern, seems timeless and certain not to be envied. Would recommend to anyone.… (more)
6 more
LibraryThing member donaldmorgan
Thomas Mcguane recommended this in an interview. Having spent some time on farms I found it engrossing, particularly the effects of a terrible winter storm on cattle. The aftermath of the freeze is harrowing. If you have any curiosity about what its like to live on a remote ranch I'd pick this up.
LibraryThing member nbturner
I really enjoyed this book, which I happened to purchase for .50 at the neighborhood yard sale. Blunt's descriptions of ranching life in remote Montana (50's-60's) is graphic and beautiful.
LibraryThing member debnance
I had expected the book to deal with the author's married life, but instead it focused primarily on her life as a child and a teen. I never found a good answer to the main question I had going into the book: Why did she "break clean"?
LibraryThing member EmScape
Judy Blunt's memoir describes growing up in a very rural area of Montana on a cattle ranch. Major themes include how women are treated as subordinate and subservient to men, and the importance of a close-knit community.
Blunt left her husband after 12 years of marriage, moved to the city, went to college and wrote a book, but there's not very much about that in this volume. She focuses mainly on her childhood and adolescence, which is fascinating to read about, but after that build-up, I would have liked to know more about how she went about escaping this life. One hopes she will write another volume.… (more)
LibraryThing member cougargirl1967
I could experience nearly everything she described, vividly laid out with frank and clear prose. Even though I'm technically a city girl, this tugged at my country heart.
LibraryThing member missmel58
Judy Blunt’s memoir Breaking Clean is a crisp, sharp, enjoyable read. Blunt carries her reader through a wide range of emotions as she travels through her youth in Montana. Her writing is engaging in its simplicity. Her subject matter, in many ways, familiar.
Though few of us have experienced Big Sky country and all of the harsh realities that go with that life, especially as a child, we have all experienced isolation, disappointment, parental abandonment, and rebellions in one way or another. We have all experienced a sense of different-ness in our worlds, a sense of being disconnected from those to whom we should feel most connected. Or at least I did. Blunt captures the emotion of her turbulent youth eloquently.
Blunt carries her readers through the experience of her youth and while one is given the impression that the author has had to distance herself from this lifestyle it is deeply ingrained in who she is. Her rural youth defined her adult life. The life she lives today seems to always be seen through the lens of where she came from. In her discussion of feminism, and she sees herself as a feminist, Blunt writes of the women of her youth, whom she does not view as feminists, “I grew up admiring a community of women whose strength and capacity for work I have yet to see equaled, true partners in the labor of farming and ranching.” (153). She goes on in the next passages to flesh out these women as able to endure anything, in silence. While Blunt refuses to be silent she endeavors to carry forward the ideal of enduring.
In the end, this is a lifestyle from which she fled, it is clear that it is this lifestyle that has shaped her views. The text is a vivid reminder of how we come to be who we are, by facing and owning who we were and from whence we came.… (more)
Fewer

This house of sky : landscapes of a Western mind by Ivan Doig
Hole in the Sky: A memoir by William Kittredge
Heart earth by Ivan Doig
Homestead by Annick Smith
Winter Brothers: A Season at the Edge of America by Ivan Doig
4 more
English Creek by Ivan Doig
Where the bluebird sings to the lemonade springs : living and writing in the West by Wallace Earle Stegner
Women's Diaries of the Westward Journey by Lillian Schlissel
In the wilderness : coming of age in unknown country by Kim Barnes
Fewer