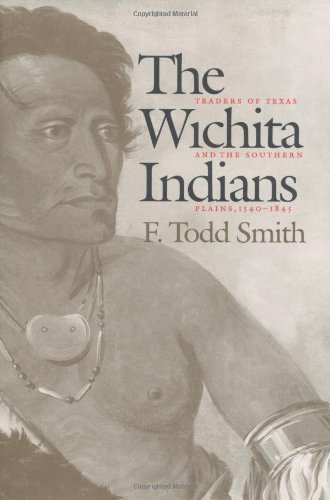 The Wichita Indians: Traders of Texas and the Southern Plains, 1540-1845

When two Wichita traders first encountered Europeans visiting the Pecos Pueblo in 1540, the Wichita tribes dominated the Southern Plains area, which stretched from Kansas to Central Texas. In the three centuries that followed, the Wichitas would be forced to negotiate with competitors, both European and Indian, for land, resources, trade, and their very survival. The Wichita Indians presents a thorough narrative of these bands from their first contact with Europeans until 1845, when the United States annexed Texas. Historian F. Todd Smith provides background information on the Wichita Indians' provenance--the separate tribes of Taovayas, Tawakonis, Kichais, Wacos, and other bands whose shared language and culture united them for survival when external pressures increased. Offering detailed descriptions of their battles, negotiations, trading practices, and survival strategies, Smith traces the Wichitas' struggles to adapt to rapidly changing circumstances and defend themselves from encroaching tribes and white settlers. A companion to Smith's other works on the early Caddos and the post-1845 Wichita and Caddo peoples, The Wichita Indians fills a gap in the history of Native Americans by focusing on this important tribe whose influence peaked on the Southern Plains long before the United States came into being.… (more)

Empire of the Summer Moon: Quanah Parker and the Rise and Fall of the Comanches, the Most Powerful Indian Tribe in American History by S. C. Gwynne