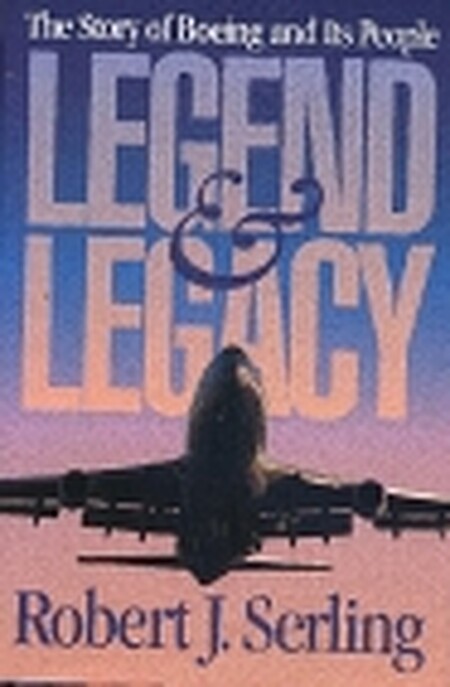 Legend and legacy : the story of Boeing and its people

The name Boeing evokes vivid images, from the B-17 Flying Fortresses of World War II to the 707 and 747 jet transports that revolutionized air travel. Less well known: The Boeing Company built the first stage of the Saturn rocket that started men on the way to the moon, developed the Minuteman missile system, and is now designing America's space station. Boeing jets, in service around the globe, carry 675 million passengers annually--the equivalent of twelve percent of the world's population. Behind the statistics and the awe-inspiring aircraft is a company of paradoxes, a vast organization nimble enough to take daring market risks that have kept it at the top of its industry. Robert J. Serling, forty-five years an award-winning aviation writer, takes the reader behind the scenes with humor, objectivity, and abundant anecdotes: Boeing once went seventeen months without seeing a single domestic jetliner and came close to bankruptcy. One of its legendary test pilots unexpectedly barrel-rolled a prototype jetliner, into which the company had sunk one-quarter of its net worth, because he thought the stunt would help sell the airplane. Legend and Legacy, Robert J. Serling's most ambitious work to date, reads like a novel, complete with memorable characters who, despite occasional stumbles, helped win the war and conquer the commercial skies: The salesman who almost traded a used 727 for $12 million worth of underwear. The vice president who worked in a darkened office illuminated by a single, low-wattage light bulb. The gifted, driven engineers who did the impossible, by yesterday. . Never in its seventy-five years has Boeing been so revealingly profiled. This book is must-reading for anyone fascinated by the history of aviation.… (more)

Flying High: The Story of Boeing and the Rise of the Jetliner Industry by Eugene Rodgers
Wide-body : the triumph of the 747 by Clive Irving
Boeing, planemaker to the world by Robert H. Redding
Hunting Warbirds: The Obsessive Quest for the Lost Aircraft of World War II by Carl Hoffman
Boeing : the first century by E. E. Bauer
2 more
Flying the Boeing Model 80 by Peter M Bowers
Voyager by Jeana Yeager
Fewer