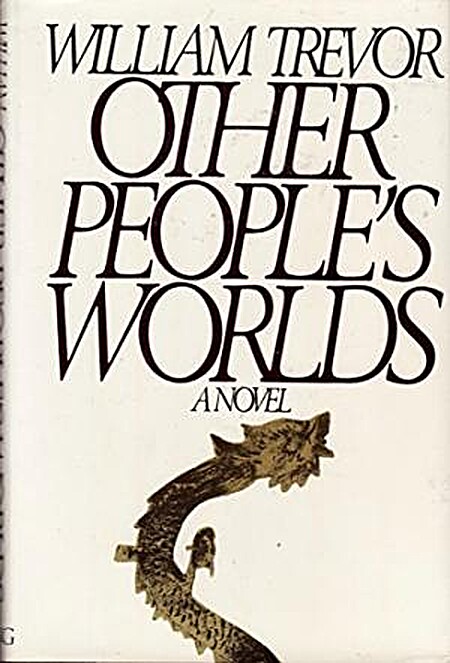 Other People's Worldsby William Trevor - a classic early novel by one of the world's greatest writers What chance has a nice middle-class woman got against a determined conman? 47-year-old widow, Julia, is about to remarry, much to the delight and relief of her daughters. But her mother has suspicions about Francis which she keeps to herself. Perhaps wrongly- if she'd shared her feelings with her daughter the disaster might have been avoided. Meanwhile there are two other women who have a claim on the would-be bridegroom - and the way things are shaping up it might be one of them, rather than Julia, who comes off worst out of the situation. William Trevor's brilliant novel explores the small horrors that lie close to the surface of ordinary life. 'A constantly surprising work, pungent with the sense of evil and corruption' John Updike,New Yorker 'Trevor is a master of both language and storytelling' Hilary Mantel William Trevor was born in Mitchelstown, County Cork, in 1928, and was educated at Trinity College, Dublin. He has lived in England for many years. The author of numerous acclaimed collections of short stories and novels, he has won many awards including the Whitbread Book of the Year, The James Tait Black Memorial Prize and the Sunday Times Award for Literary Excellence. He has been shortlisted three times for the Booker Prize- in 1976 with his novel The Children of Dynmouth, in 1991 with Reading Turgenevand in 2002 with The Story of Lucy Gault. He recently received the prestigious David Cohen Literature Prize in recognition of a lifetime's literary achievement.… (more)

LibraryThing member stevesmits
So much prose writing style by today's authors --even the literary lights we admire -- is crass, hard edged, often blunt and profane. I'm ok with this since so much else in the works of our genius writers is praise worthy -- themes, structure, complex portrayals of the human condition. But, it's fitting in remembering the incomparable William Trevor to savor his marvelous prose, so rich, subtle and evocative. In describing a character in just two sentences Trevor can give us a deeply nuanced sense of the character's essence and relationship to time, place and others. His writing is amazing in how it distills so much depth of meaning in so economical a fashion. Perhaps it's his ability to so effortlessly convey such depth that made him the master of the short story genre.

In his works, including his novels, Trevor often first introduces us to people that are recognizable and situations that are comprehensible, but then inserts a character who will dramatically alter the predictable paths of the lives of these people. In "Other People's Worlds", Julia Ferndale is a 47 year-old widow living with her mother in comfortable circumstances. Julia views other people a bit too incautiously; she has a compassionate outlook that her hard-edged mother thinks could stand a bit more skepticism. Julia has fallen in love with a much younger man, Francis Tyte, and they are set to be married in a few weeks. Francis is a journeyman actor, a handsome, charming man who is principally known for his appearance in a television commercial. Francis has a smooth and ingratiating personality and he's captured the affection of Julia's entire family.

Francis is an utter fraud, a sociopath who has manipulated and defrauded women and couples across the country. Everything he has told Julia about his past is false, including the story that his parents were killed in a railway accident; they are alive in a retirement home. Francis is married to a much older women who he has abandoned. In London he had taken up with Doris, a shop girl, with whom he's had Joy, a hapless girl now twelve years-old. Doris is obsessed with her "Frankie" who stops by from time-to-time but keeps from making their relationship permanent with lies about his "dying" wife who he cannot abandon. It is suggested that Francis was sexually abused as a child, but this could be a lie. We do learn that on late night jaunts into London's seamier district he performs sexual acts with men for money.

Julia and Francis are married and depart on their honeymoon to Italy where on the first day Francis announces that he has no intention to remain with Julia and gets her in her shock to sign over some valuable jewelry he has had his eye on. Julia returns to England shattered, but doesn't wish to make this fraud public. Julia was a deeply religious Catholic, but in a counseling session with her priest we see that this event has shattered her belief that God is merciful and just.

There is a newspaper account of Francis's cruel act (the hotel manager had notified the Italian police) and thus learning about Julia Doris seeks her out. Doris is becoming increasingly unbalanced and has developed a delusion that an actress seen with Francis has stolen him from her. Doris's drinking is out of control and she is making threatening statements toward the actress. Julia tries to intervene by going to London to stop Doris who is on a drinking binge and can't be found. Julia becomes aware of Joy's plight and there's a growing indication that she must do something to save this child. Doris's threats to the actress are not fulfilled, but it is learned from the newspaper that a woman matching Francis's wife has been murdered. Doris is shown to be locked away somewhere, either prison or an asylum.

Another wonderful aspect of Trevor's plots is that he never takes the cheap path to resolving the conflicts created for the characters. What could for some authors be a revenge ending where Francis gets what he deserves turns out quite differently for Julia. She has been deeply hurt by Francis but she knows that her own weakness is part of the cause of this. She once loved Francis but now sees him as a pitiful person whose sickness stirs some degree of compassion, a trait that has remained despite the wounds she has suffered. A letter from Germany arrives in which Francis absolves himself from any blame and asks for money. Julia does so (and it seems will continue to do so), not out of love or any desire to entice him back, but because her core value of empathizing with "Other People's Worlds" remains within her, even though this has brought darkness to her.… (more)