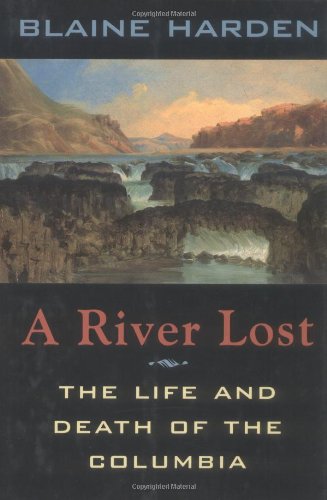 A river lost : the life and death of the Columbia

After a two-decade absence, Washington Post journalist Blaine Harden returned to his small-town birthplace in the Pacific Northwest to follow the rise and fall of the West's most thoroughly conquered river. Harden's hometown, Moses Lake, Washington, could not have existed without massive irrigation schemes. His father, a Depression migrant trained as a welder, helped build dams and later worked at the secret Hanford plutonium plant. Now he and his neighbors, once considered patriots, stand accused of killing the river. As Blaine Harden traveled the Columbia-by barge, car, and sometimes on foot-his past seemed both foreign and familiar. A personal narrative of rediscovery joined a narrative of exploitation: of Native Americans, of endangered salmon, of nuclear waste, and of a once-wild river now tamed to puddled remains. Part history, part memoir, part lament, "this is a brave and precise book," according to the New York Times Book Review. "It must not have been easy for Blaine Harden to find himself turning his journalistic weapons against his own heritage, but he has done the conscience of his homeland a great service."… (more)

LibraryThing member will5352
This book is now 20 years old so I am really late to the party to write a review. I actually came across this book in the footnotes of a much more current book, but I was prompted to read it based upon that footnote. I was not disappointed, even though 20 years have likely made much in the book dated. First of all I found Harden’s prose exceptional. I cannot say that about many books I read. He begins with a narrative of his family that I found it very riveting. So, not to be too long winded I’ll just say he gives each side a fair representation concerning the Columbia. I learned allot that I did not know before and to me that is always a big plus from a book. What I learned from this book that I did not know is why I give it a 5 Star review. You can an East Sider, a West Sider, a Slackwater, a Hanford or a Native American. They all have their views and each has its value. Harden comes from the Columbia Basin and you might expect because of that he would conclude the book with a bias one way or another. He does not. The reader must make their own judgement after a very fair presentation of all sides. “A River Lost” is 20 years old but worth the read. I would like to someday read “A River Revisited.” How much more might I learn. Harden, are you out there? New book? Please!!!!… (more)

Northwest passage : the great Columbia River by William Dietrich
River of the west : stories from the Columbia by Robert Clark
Voyage of a summer sun : canoeing the Columbia River by Robin Cody
The Good Rain: Across Time and Terrain in the Pacific Northwest by Timothy Egan
Cadillac desert : the American West and its disappearing water by Marc Reisner
13 more
Puget's Sound : a narrative of early Tacoma and the southern Sound by Murray Cromwell Morgan
The Organic Machine: The Remaking of the Columbia River by Richard White
Plants of the Pacific Northwest Coast : Washington, Oregon, British Columbia & Alaska by Jim Pojar
The final forest : the battle for the last great trees of the Pacific Northwest by William Dietrich
Encounters with the archdruid by John McPhee
Purple Flat Top : in pursuit of a place by Jack Nisbet
River Song by Craig Lesley
The Oregon desert by E. R. Jackman
The Olympic Rain Forest: An Ecological Web by Ruth Kirk
Winter Brothers: A Season at the Edge of America by Ivan Doig
Recovering a lost river : removing dams, rewilding salmon, revitalizing communities by Steven Hawley
Skid road : an informal portrait of Seattle by Murray Cromwell Morgan
Great river of the West : essays on the Columbia River by William L. Lang
Fewer