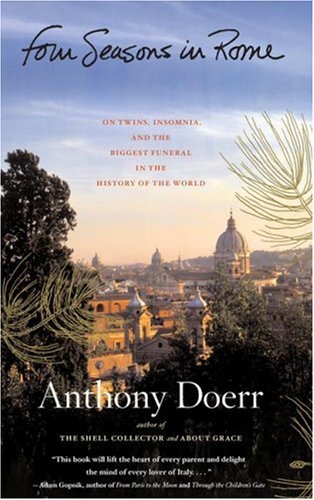 Four Seasons in Rome: On Twins, Insomnia, and the Biggest Funeral in the History of the World

From the author of the acclaimed Pulitzer Prize-winning #1 New York Times bestseller All the Light We Cannot See, a "dazzling" (Azar Nafisi, author of Reading Lolita in Tehran) memoir about art and adventures in Rome. Anthony Doerr has received many awards--from the New York Public Library, the National Endowment for the Arts, and the American Library Association. Then came the Rome Prize, one of the most prestigious awards from the American Academy of Arts and Letters, and with it a stipend and a writing studio in Rome for a year. Doerr learned of the award the day he and his wife returned from the hospital with newborn twins. Exquisitely observed, Four Seasons in Rome describes Doerr's varied adventures in one of the most enchanting cities in the world. He reads Pliny, Dante, and Keats -- the chroniclers of Rome who came before him--and visits the piazzas, temples, and ancient cisterns they describe. He attends the vigil of a dying Pope John Paul II and takes his twins to the Pantheon in December to wait for snow to fall through the oculus. He and his family are embraced by the butchers, grocers, and bakers of the neighborhood, whose clamor of stories and idiosyncratic child-rearing advice is as compelling as the city itself. This intimate and revelatory book is a celebration of Rome, a wondrous look at new parenthood, and a fascinating story of a writer's craft--the process by which he transforms what he sees and experiences into sentences.… (more)

Doerr worked on the early writing and research for his later Pulitzer Prize winning novel "All the Light We Cannot See" (2014) and completed the short story "Village 113" about the Chinese Three Gorges Dam project (collected in "Memory Wall" (2007) during this time and wrote his notes and journal entries that became the basis of this book.

Thanks to my friend Karan for introducing me to and gifting this book! (less)… (more)
Fewer

The yellow-lighted bookshop : a memoir, a history by Lewis Buzbee
Palladian days : finding a new life in a Venetian country house by Sally Gable
The light of the world : a memoir by Elizabeth Alexander