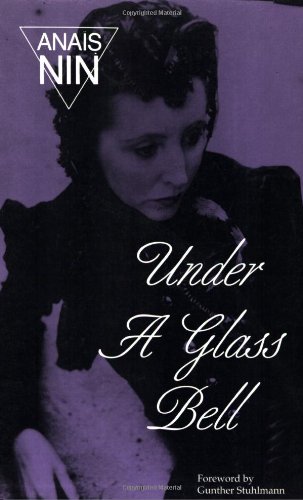 Under a Glass Bell and Other Stories

Although "Under a Glass Bell" is now considered one of Anais Nin's finest collections of stories, it was initially deemed unpublishable. Refusing to give up on her vision, in 1944 Nin founded her own press and brought out the first edition, illustrated with striking black-and-white engravings by her husband, Hugh Guiler. Shortly thereafter, it caught the attention of literary critic Edmund Wilson, who reviewed the collection in the "New Yorker." The first printing sold out in three weeks. This new Swallow Press edition includes an introduction by noted modernist scholar Elizabeth Podnieks, as well as editor Gunther Stuhlmann's erudite but controversial foreword to the 1995 edition. Together, they place the collection in its historical context and sort out the individuals and events recorded in the diary that served as its inspiration. The new Swallow Press edition also restores the thirteen stories to the order Nin specified for the first commercial edition in 1948.… (more)

LibraryThing member soylentgreen23
I've always had difficulties reading fiction written by women (perhaps I haven't read enough). If you look at my catalog in its entirety, you'll find half a dozen women writers, or there abouts.

I'm also not especially keen on prose that fancies itself poetry, and perhaps that's the other reason why I was so keen to get this one finished, once I'd started it.… (more)
3 more
LibraryThing member raizel
A collection of short stories written and originally between 1938 and 1944. Very poetic and hence not something I'm good at appreciating. The story with the most dialogue and action, "The Mouse," ends with a character near death, but clearly who this woman is and how she is perceived and treated by others is more important than whether she lives or dies, since we don't find out what happens. The engravings are abstract and interesting.… (more)
LibraryThing member tandah
Tried, but just couldn't get into it - abandoned!
LibraryThing member ReneePaule
There are some lovely short stories in this book, with some important messages for Humanity. I particularly enjoyed reading 'Houseboat', 'Ragtime' and 'Hejda'.

Whereas Anais Nin is a lovely descriptive writer - overly so for my taste - I do sometimes struggle with metaphors such as "The bushes were soft hairy elbows touching mine".

House of incest by Ana誰s Nin
Winter of artifice : three novelettes by Anai s Nin
Delta of Venus : erotica by Anaïs Nin
A spy in the house of love by Anaïs Nin
Waste of timelessness, and other early stories by Anaïs Nin
1 more
A Woman Speaks: The Lectures, Seminars and Interviews of Anais Nin by Evelyn Hinz
Fewer