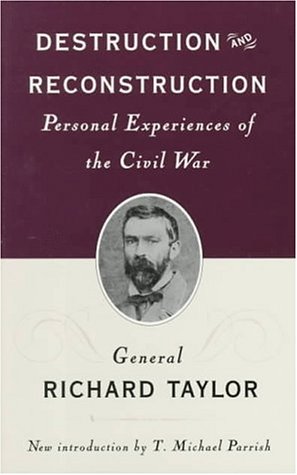 Destruction and Reconstruction: Personal Experiences of the Civil War

Collector's Library of the Civil War

Richard Taylor was born to one of America's most prominent military families. His grandfather, Richard Lee Taylor, had served in the American Revolution, while his father, Zachary Taylor, rode military fame all the way to the White House in 1840. During the Mexican-American War, Taylor was a military secretary for his famous father. When the Civil War broke out, Taylor began quickly rising through the ranks, leading a regiment at the Battle of First Bull Run. Taylor had all the right connections, but he was a skilled leader, quickly becoming a brigadier general under Stonewall Jackson, serving during the renowned Shenandoah Valley Campaign in 1862. Taylor became major general and was sent to Louisiana, partly because his arthritis had left him disabled during the Seven Days Battles during the Peninsula Campaign in the summer of 1862. Taylor struggled with inadequate troops and supplies out west for the rest of the year, but he performed admirably enough to be promoted to Lieutenant General before the end of the war. Nathan Bedford Forrest noted that Taylor was "the biggest man in the lot. If we'd had more like him, we would have licked the Yankees long ago."After the war, Taylor authored Destruction and Reconstruction, considered one of the most credible memoirs written by a Civil War veteran. Taylor focuses on the Confederacy's grand war strategy, casting a critical eye. He was an unreconstructed rebel during Reconstruction, so the memoirs finish by discussing Reconstruction politics.… (more)

LibraryThing member gregdehler
Civil War memoirs by Confederate general Richard Taylor, son of former president Zachary Taylor. Taylor served with Stonewall Jackson in the valley campaign and joined Lee's forces for the Seven Days battle at the end of McClellan's Peninsula Campaign. After recovering from a wound, Taylor was re-assigned to his home state of Louisiana and spent much of the remainder of the war in the Bayous fighting off General Banks and Admiral Porter. Taylor's account of the actions is often very exciting and well written. Where the book strays is in his personal observations of men and events. Taylor has a favorable view of Generals Bragg, McDowell, and McClellan, three commanders not typically accorded high marks by historians, and a very negative view of Generals Grant and Sherman, who are regarded as among our nation's most gifted soldiers. Even more oddly, Taylor argues that the war was not about slavery, but about tariffs and economic dominance. Finally, he is very defensive of President Andrew Johnson's Reconstruction policies (another facet in which he stands diametrically opposed to the view of modern historians).… (more)